Stage 5 of the 2014 Tour de France was expected to be full of drama and some carnage. And that was assuming that the difficult cobbles would be dry. It rained. The result was that there were dozens of crashes even before the peloton hit the fabled cobbles, including 2 crashes involving the already-injured 2013 winner and race favorite Chris Froom. Froom limped to a team car after his second hard crash of the day and withdrew from the Tour, changing the dynamic of the race and taking a toll on many JBarCycling Minileague teams. Between the withdrawals of sprinter Mark Cavendish and GC favorite Froom, many teams have lost big point potential. 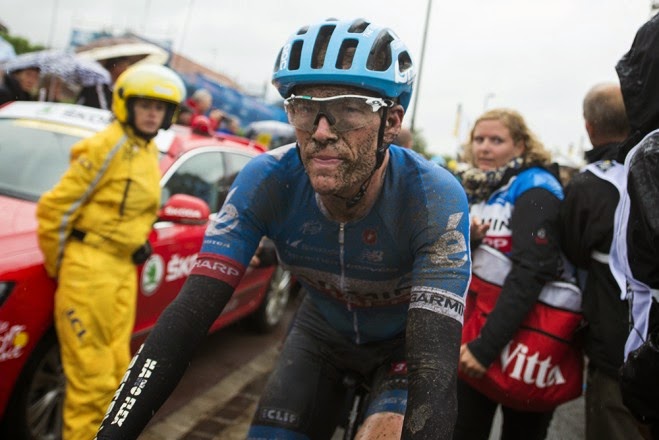 Garmin-Sharp GC contender Andrew Talansky after stage 5. Photo respectfully poached from Velonews.
Stage 5 of the 2014 Tour de France will be one for the history books, and one the riders will never forget.

The Hard Man Award goes to Team Lanterne Rouge and director Mashall Meggers. The team racked up a whopping 452 points for the day on the strength of 1-3-4 results from Stage winner Lars Boom, third place and yellow jersey holder Vincenzo Nibali, and fourth place finisher Peter Sagan. The stage also moved Team Lanterne Rouge up to third place in our league at 1545 points.
Marshall, drop me an e-mail at jbarcycling@comcast.net and I'll arrange for you to receive your $10.00 gift card, compliments of the fine folks at Chainwheel.

Michael and Krissa Mattox of Team Wheel2Wheel continue to lead our 29 team league with 1729 points. As proof that clean cycling can prevail, Team Alldopedup is riding the tail of the autobus at 271 points.

I'll be adding a few more prize points and will update the awards calendar.
Posted by JBar at 9:23 AM

I got a close second!

Yes, you did, with very strong 444 points. Perhaps I should have added a "horseshoes and hand grenades" prize in which close counts.