The "Family" statue commissioned by Pulaski County Judge Buddy Villines and paid for by generous donations from Arkansas Blue Cross/Blue Shield, Garver, and many others, was unveiled on Wednesday at River Mountain Park near the Two Rivers Park Bridge. 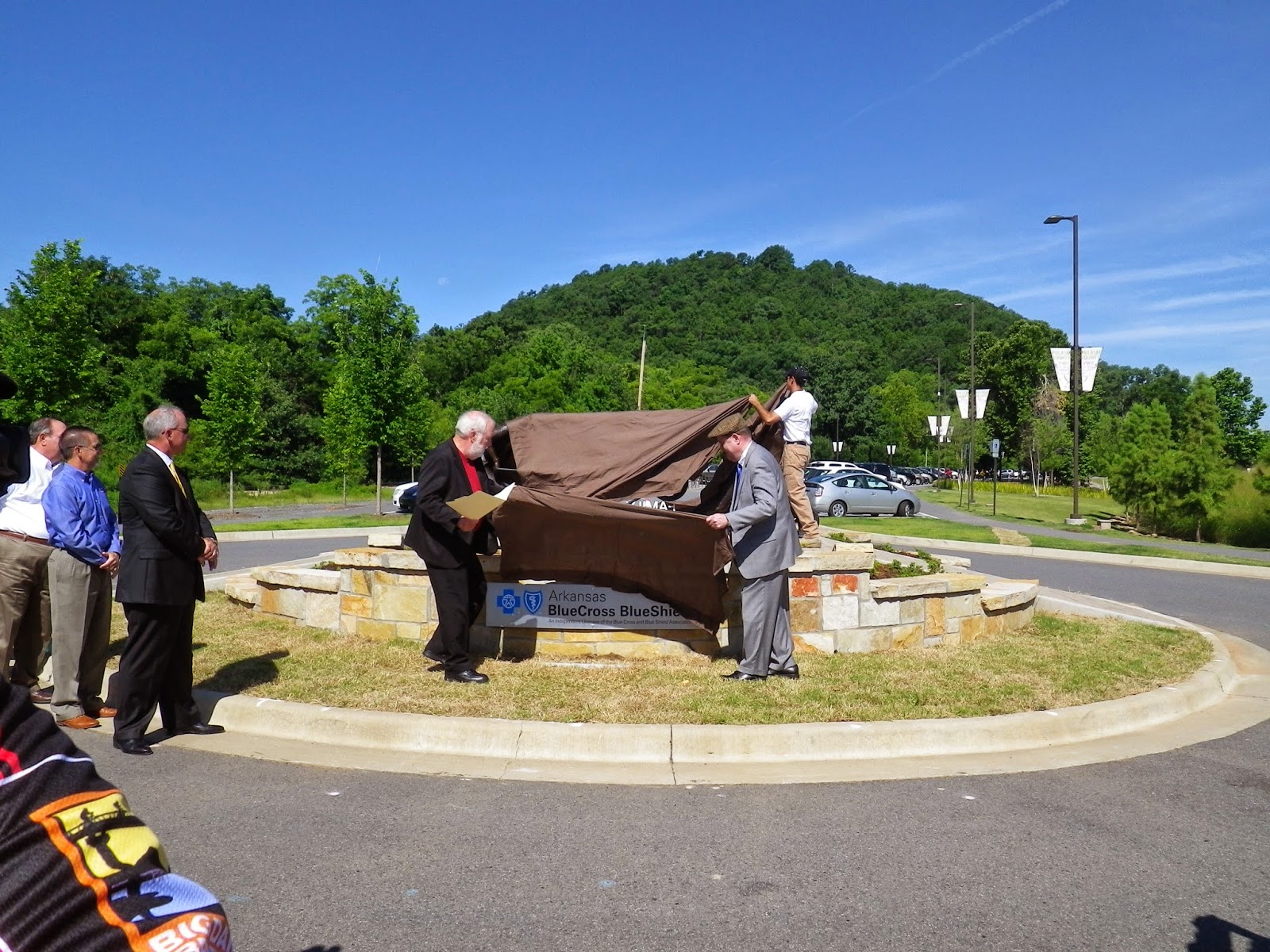 It was a rare sunny and cool July day for the unveiling. 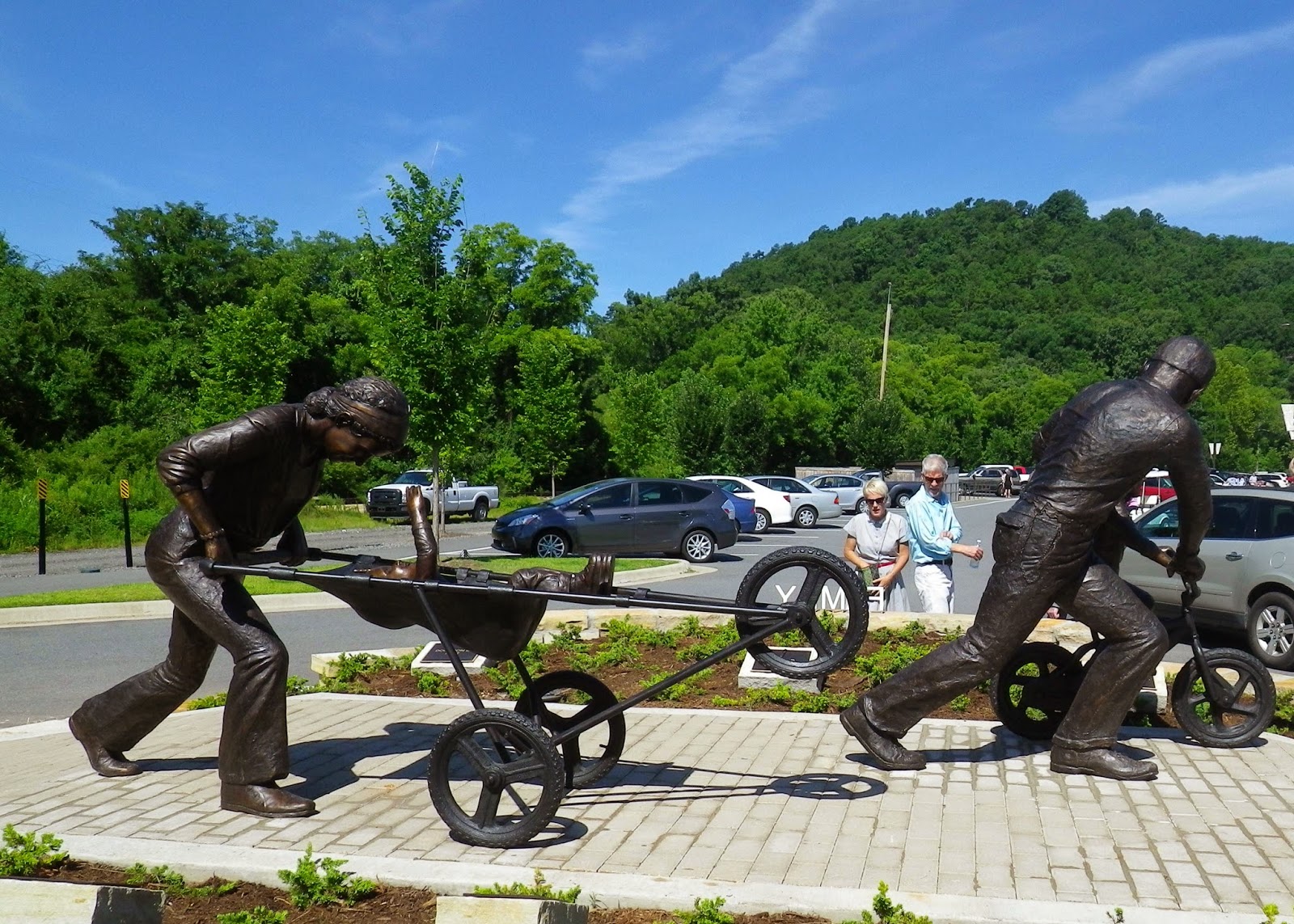 Judge Villines wanted the statue to represent the many families who benefit from the River Trail and bridges. photos by Diane Barton

I dropped by on my ride last night and found a small group of folks admiring the work. One snarky observer noted that the donor plaques looked like grave markers, but that could simply be seen as part of the total effect. You know, completion of the circle of life from the infant in the stroller to those who have passed....
I don't think that is what the sculptor or Judge Villines had in mind, but much of the beauty of art is in its interpretation, so see it as you will. 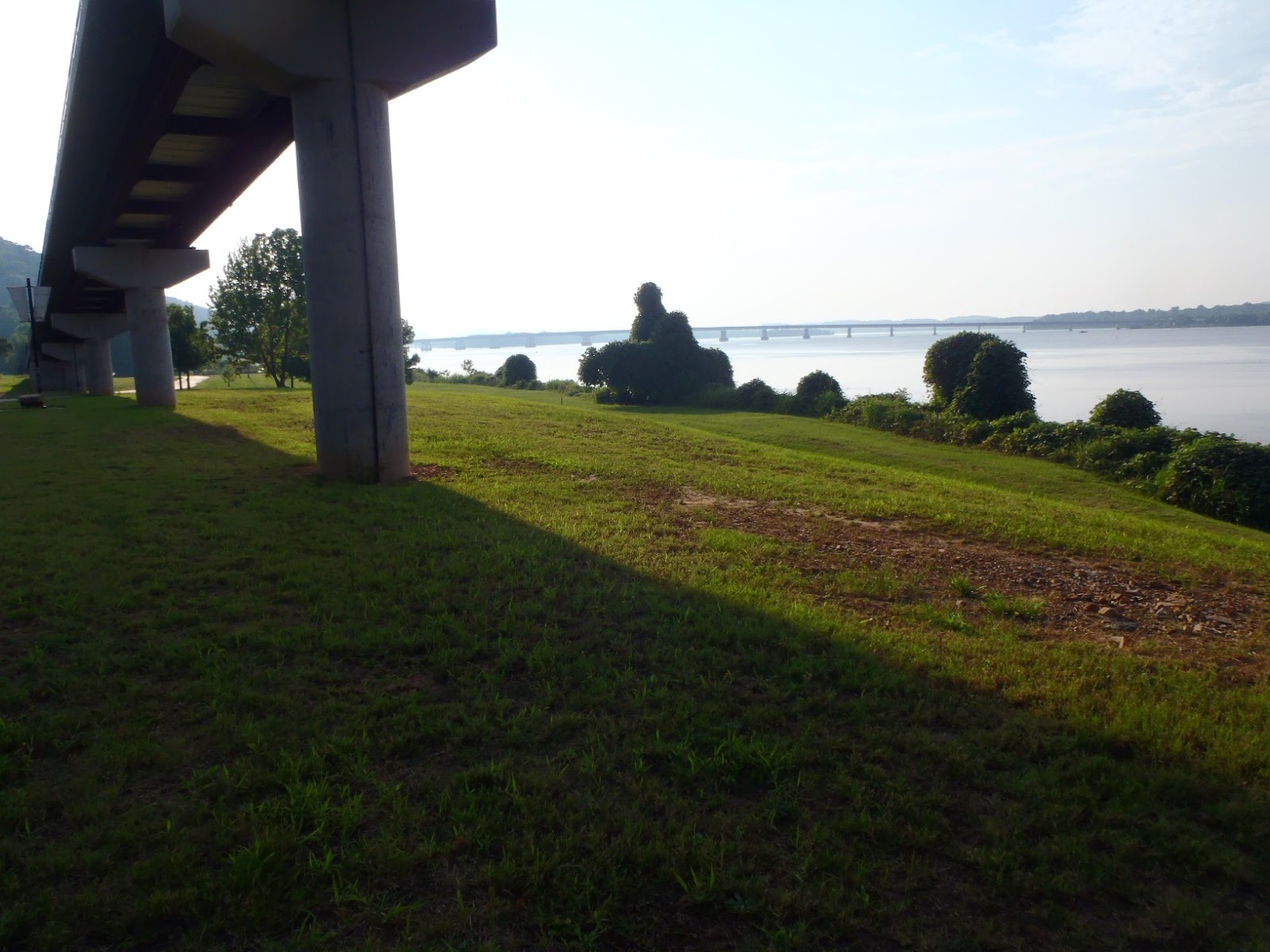 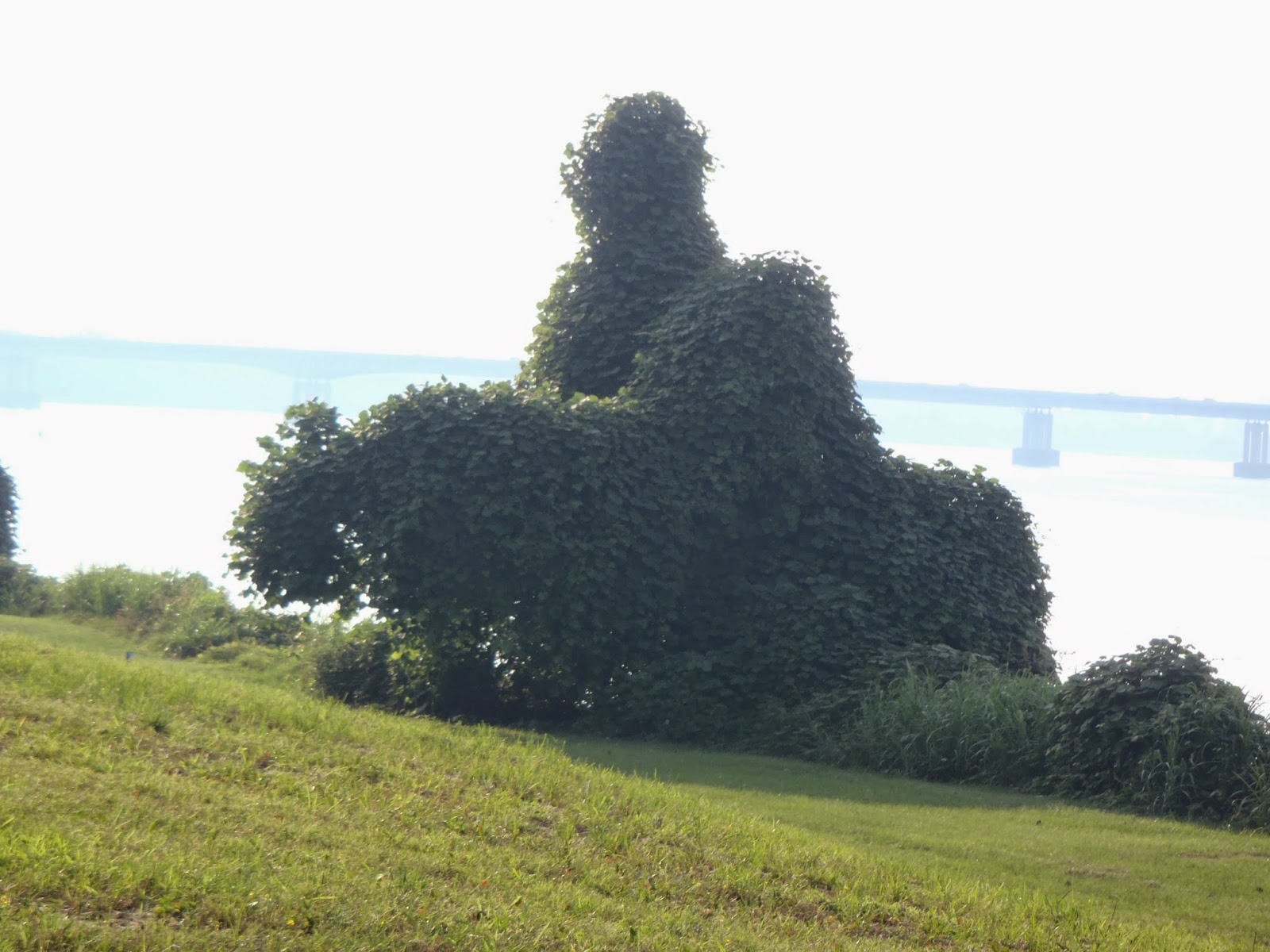 Speaking of art, every time I pass this point near the BDB, I notice what looks to me to be topiary of a rider. Though by definition, topiary requires the clipping or training of a plant, this vine covered tree is close enough for me.

Changes in store for the River Trail near Rockwater Marina

The North Little Rock City Council approved the expenditure of $70,000.00 to make improvements to the River Trail near the Rockwater Marina. The trail, which is now simply a blocked off section of what was River Road, will be narrowed to its standard width, and lighting and landscaping will be added. The developer of the area requested the changes and it was seen as a way to make the adjacent residential lots more attractive while creating a buffer between the trail and private residences. I can appreciate the desire for lighting in this area, along with some separation from the trail, though I have mixed feelings about the City footing the bill. 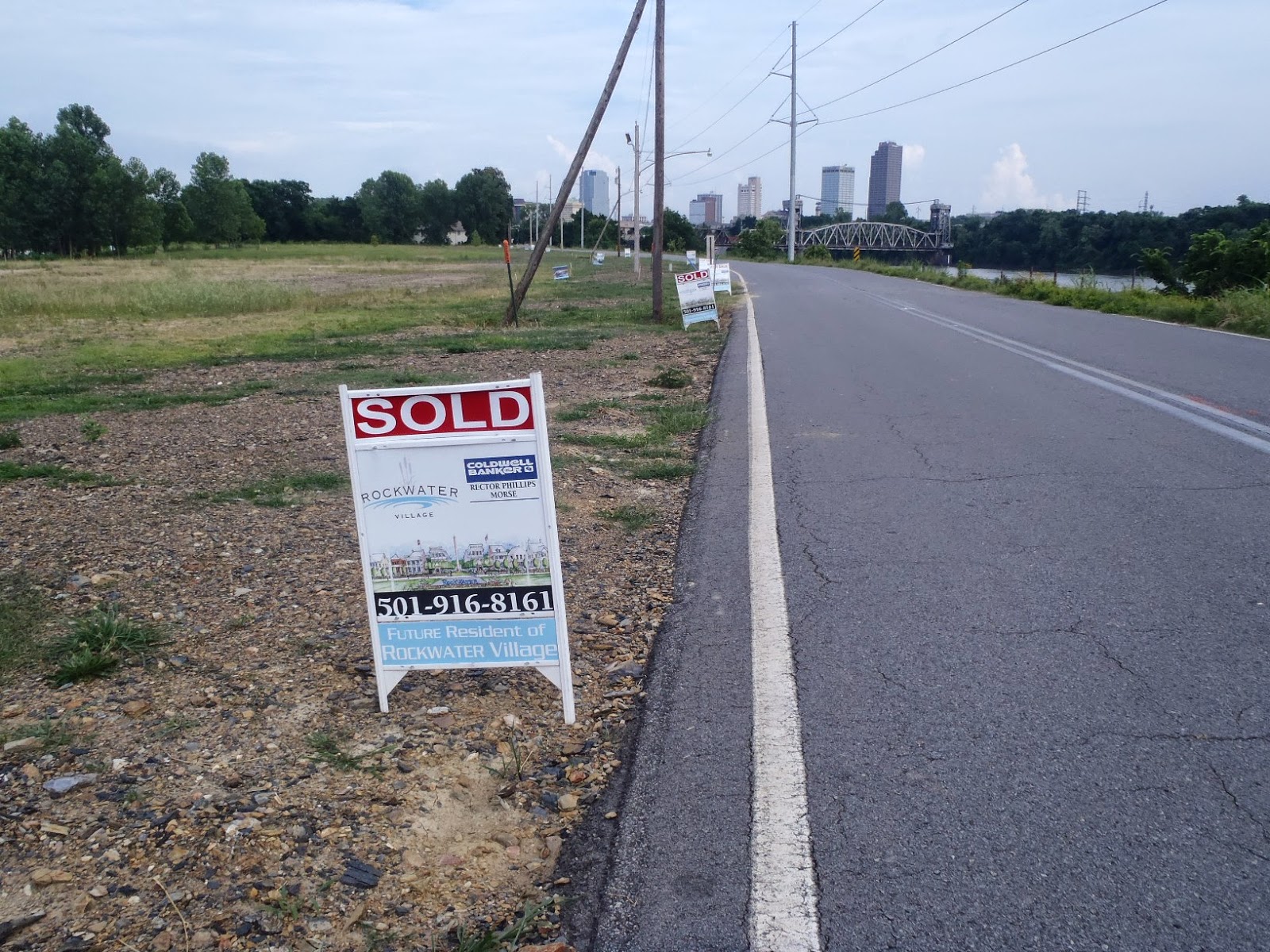 This stretch will soon look more like the rest of the trail. It is unique in that residential lots abut the trail. Several lots now have "sold" signs.

...on the topic of the marina
Things seem to be progressing very slowly at the Rockwater Marina. In spite of a large federal grant to provide transient slips and the support of the City, only a few slips are occupied, I don't think the fuel dock or the ship's store are yet to open and none of the promised Rockwater Amenities such as "concierge services" seem to be in place.
When ground was broken with great fanfare in February of 2013, I fully expected the marina to soon be bustling with activity, with my greatest concern being that of traffic conflicts with trail users. Time went by and I then figured that spring of 2014 would bring an influx of boats along with the promised store, beer sales, and activities. 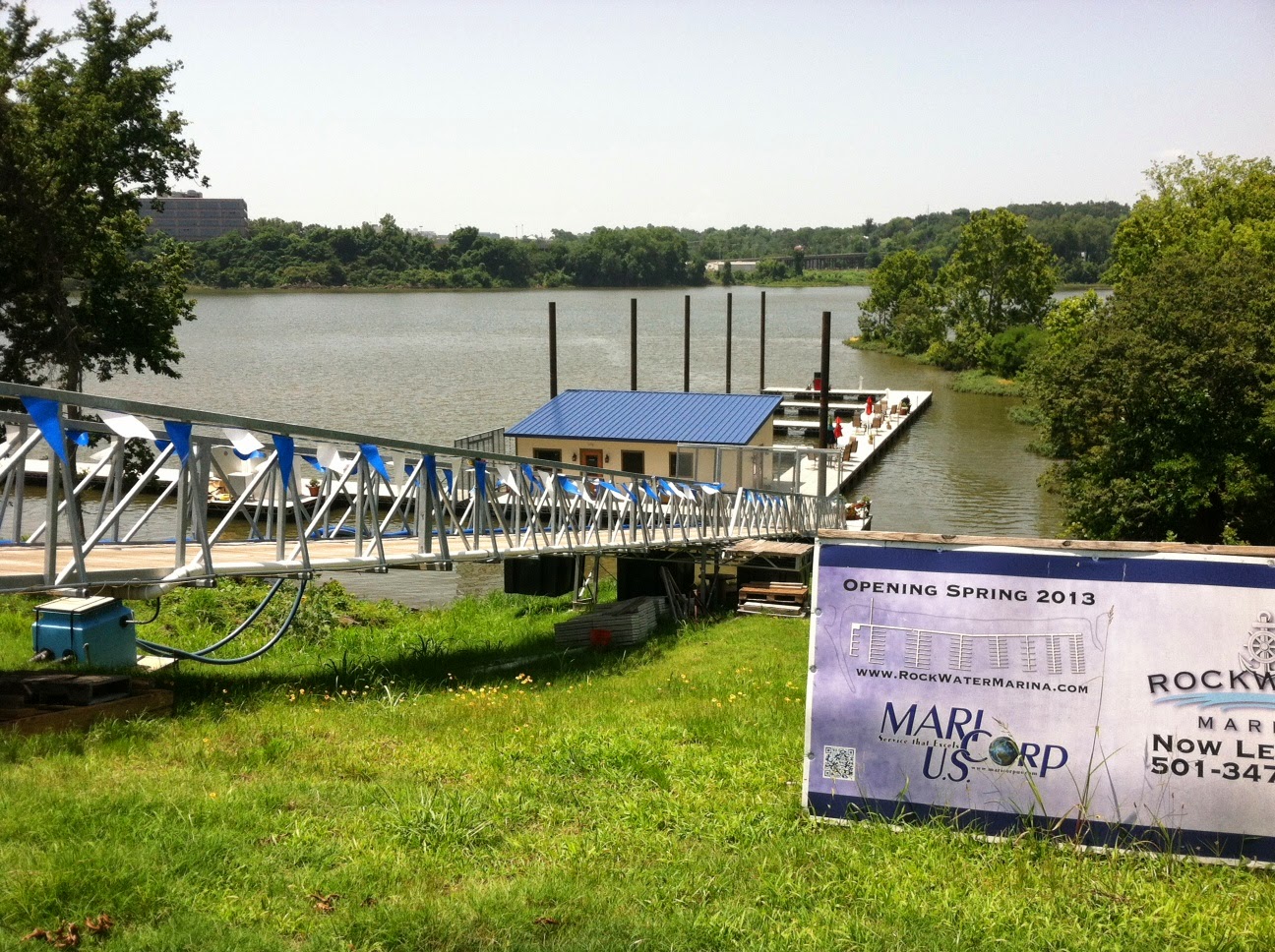 I would have expected things to be hoppin' by now at the Rockwater Marina on a July Sunday afternoon, but there was not a soul in sight.

As of last Sunday, there were about a dozen boats scattered among the hundreds of empty slips, the ramp the marina and docks was gated and locked, and the facility was not staffed. Given the time of year, I would say that 2014 will come and go without much additional progress. I hope the developer proves my concerns to be unfounded and that the Rockwater Marina becomes the center of activity that was promised.

I don't have a time line on this project, but the City of NLR sold a parcel of land near the skate park on River Road for the construction of a new launch ramp. Part of the proceeds of that land sale are being used for the trail improvements at Rockwater. The inlet to the existing launch ramp at Burns Park is silted in to the point of being unusable by most boats.
The new ramp will be convenient to the marina, though few of the boats served by the marina are likely to use it. The ramp is needed because the inlet to the ramp at nearby Burns Park so filled with silt that only small, light craft can get in and out. Dredging is expensive and temporary and, since it is not in the navigation channel, it does not qualify for any assistance from the Corps of Engineers.

Shep The Goose Dog-Back From Injured Reserve
I dropped a note to NLR Park Ranger Ian Hope a couple of weeks ago to suggest that he and Shep the Wonder Dog spend a little extra time around Victory Lake. A gaggle of poop producers was littering the trail and terrorizing the citizenry. Hope responded that Shep was off-duty, having injured his paw while on the job in Burns Park. 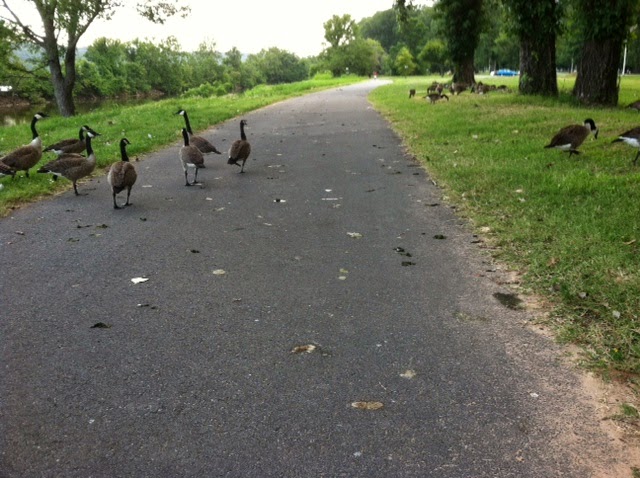 This scene was reminiscent of the bad ol' days when the geese gangs controlled much of the North Little Rock River Trail.

I'm happy to report that Shep is back on the job and the geese are back to watching their step. 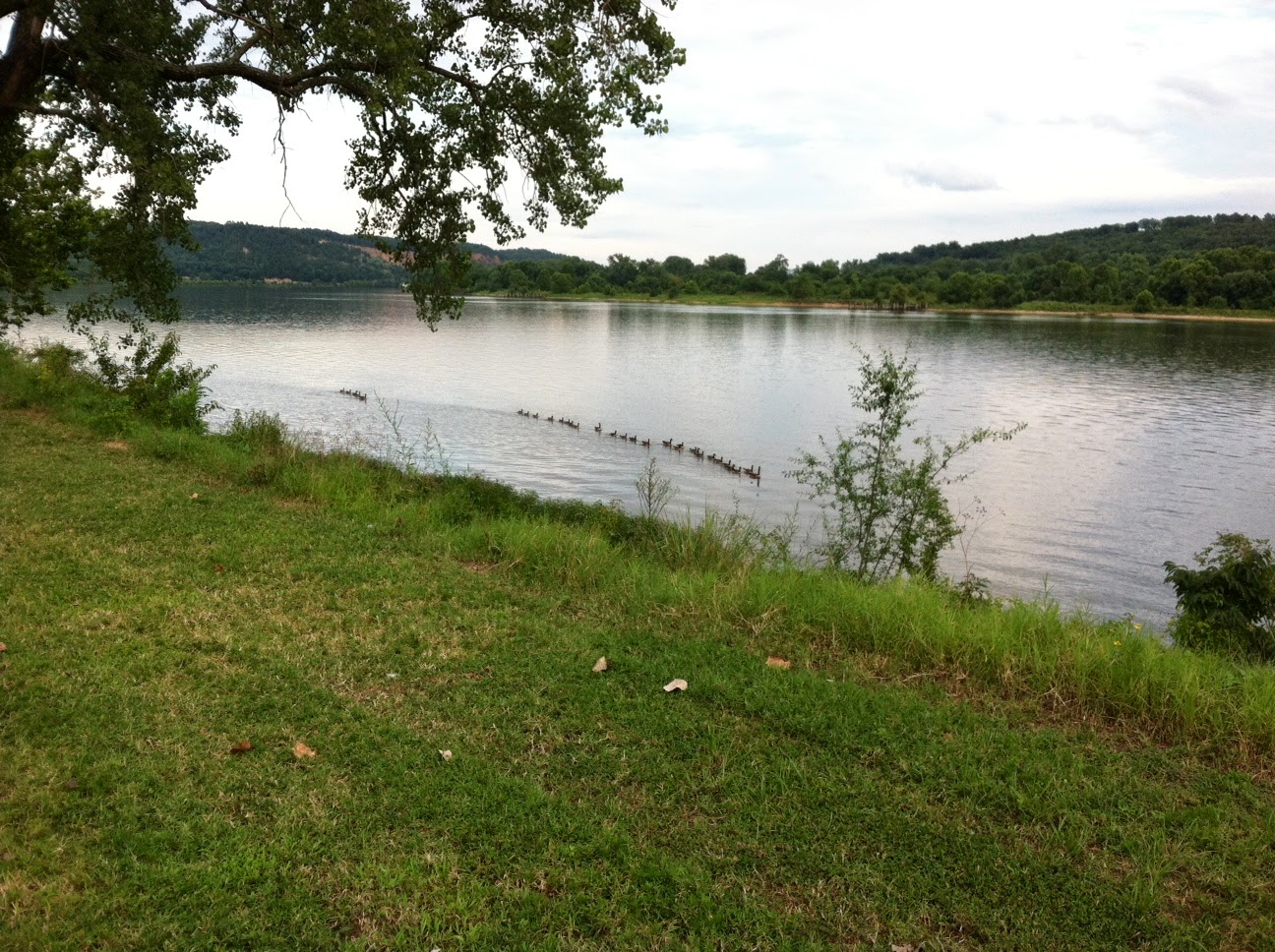 Back where they belong.

While the geese are beautiful birds, they are a nuisance when they cease to migrate and overpopulate. Unfortunately, parks, golf courses, and soccer fields are perfect habitats for them with water, plentiful food, and no predators.  I'm glad that Shep and Ian are on duty.
﻿
Posted by JBar at 4:06 PM