Along The Trail: Groundbreaking, detour, and daffodils

Ground was broken for the new Rockwater Marina at a ceremony held last Friday. The marina, located across from the Riverside at Rockwater apartments on the North Little Rock riverfront, will provide fuel and rented slips, along with transient slips for boaters passing through on the river. 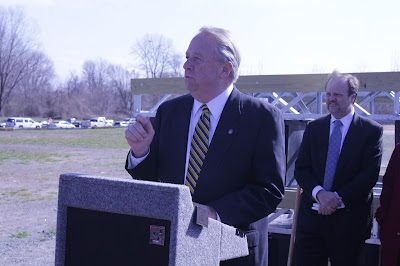 Federal transportation dollars are helping to fund transient slips within the marina project. Rep. Tim Griffin and Senator Mark Pryor were on hand to share in the moment. 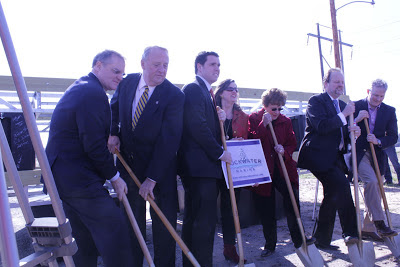 This may be one of the few bipartisan efforts we'll see that actually produces a result. Senator Mark Pryor is shown at the left while Rep. Tim Griffin shovels away at the extreme right.
The marina has been a long time in coming, with several proposals for similar projects having fallen through over the years. While I have some minor concerns about traffic conflicting with River Trail activities, the marina will expose a new demographic to the trail. A little exposure is usually all that it takes to make people supporters, and we can always use some more well-heeled voters as fans of the River Trail.
In looking over the marina website, I was interested in the concierge services being offered. A river-going swell could dock the cruiser, pick up his pre-ordered groceries and have a chef come on board to prepare that special dinner while the skipper gets a massage. As a boater whose more luxurious experiences are likely to include a kayak, frigid roadside clothing changes, a Coleman stove, and a warm sleeping bag in the bed of my truck, I find that a vision of the high life on the river has some measure of appeal! 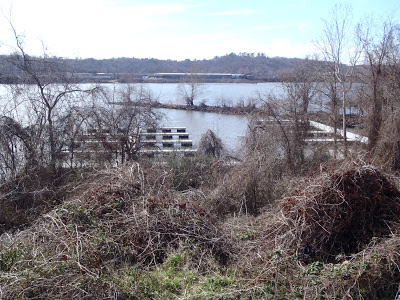 Dock modules have been towed up the river from the downtown launch ramp and placed at the marina site.
There will not be a boat ramp at the marina, and the parking lot location will create only foot traffic crossing the River Trail. The City of North Little Rock, with the support of the Game and Fish Commission, will be building a new launch ramp slightly upstream near the skate park.
Trail Detour Ahead! 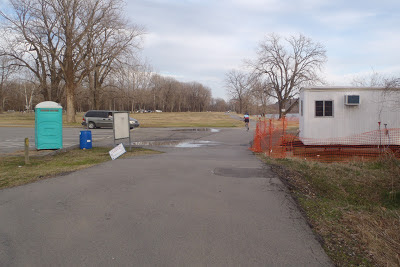 The River Trail will be temporarily closed in Burns Park as construction proceeds on the fishing pier just downstream from this job shack. Trail traffic will be diverted to the nearby and parallel Catfish Road. No problem!
They're Back!
The crowds, that is! Though the weather flaks had forecast an all-day downpour for last Sunday, the dismal conditions quickly gave way to partly sunny skies and balmy temperatures. The trail-using public caught on fast and within a couple of hours the River Trail was buzzing with activity. 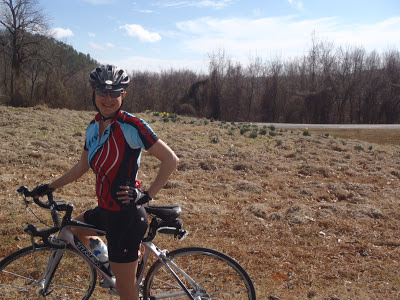 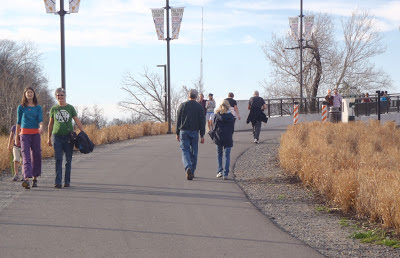 Folks were streaming across Two Rivers Bridge as we rode back into town on Sunday afternoon.
Be alert. Be Polite. Stay Right.
This is my mantra for getting along on the trail. I'm lobbying for some sort of PR campaign to deliver that message to the masses of diverse users of the trail. In the meantime, let's all just work to get along! Cyclists get more than our fair share of blame for trail conflict, some of it deserved, much of it not. For example,Two Rivers Park on a warm Sunday is almost always crowded with meanderers, so it's not a great place to be head down and full gas on the TT bike.
Note to Sunday TT guy: Yes, this refers to you!
It's still mid-Februalry, but the feeling that it is spring is everywhere! I'm ready to bump up the mileage, drop that extra 5 pounds, and see all of my fair-weather pals out on the road. Come on, it's that time!
﻿
Posted by JBar at 6:32 PM

Good seeing you two out there on Sunday, It was Lisa's first trip to the new trail atop Ft. Roots, she's sold.

I agree. A little common courtesy and consideration by all would go a long way. I always thank pedestrians who acknowledge me and/or move over when I let them know I'm passing them. What scares me, though, is a walker wearing earbuds and meandering all over the trail. I can only yell so loud.

Thanks advocating this, JBar. I'm an avid road cyclist and I must say that whatever bad reputation cyclists have for creating conflict on the River Trail is well deserved. Way too often I see cyclist make senselessly dangerous passes of pedestrians at dangerous speeds. Please slow down cyclists! You're giving us all a bad name. The irony is: these cyclists are the same ones that complain when a car blasts past them on the road to "save 10 seconds." Then the cyclists go out and do the same to pedestrians and other bikers. Remember, on the River Trail, bikes are the equivalent of cars, so treat those pedestrians the way you want to be treated on the road.
- Matt Dempsey

Be Liberal with Space

I bike the River Trail regularly. Occasionally, I will leave my bike at home and walk a section, usually around the dam. By doing so, I gain a walker's perspective of what it feels like to have a bike come whipping around you. Talk about making you jump! I notice a lot of cyclists don't offer a very wide berth when passing pedestrians. But if the space is available, why wouldn't you? I promise it is appreciated.