The story of the replacement for Little Rock's Broadway Bridge has been a long and convoluted one. Civic leaders called out for the new bridge to be an iconic structure that could serve to identify and shape our cities. Citizens were called upon to present their visions for the bridge, a design competition was held, and much lively discussion ensued.  The result of all of that posturing, planning and promoting was....well... nothing. 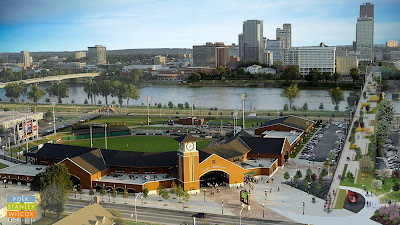 The highway department wrote off the grand plans as being too expensive and presented a plan for a very basic utilitarian design. There was some push back from the cycling community and from Metroplan to expand the accommodations for cyclists and pedestrians from a 16' lane to at least 20', preferably 24', but that also went nowhere. That issue was addressed in this space back in September.
The AHTD was not really open to any change in plans and the neither Little Rock nor North Little Rock were forthcoming with any additional funding, so it appeared that plans were fixed.

And then along came Buddy!
Pulaski County Judge Buddy Villines seemed determined to make the new bridge a landmark, so he went to work and came up with incremental funding and a new design. The Judge has earned my respect with his dogged pursuit of such projects as the BDB and the Two Rivers Bridge, but we're not quite on the same page when it comes to the Broadway Bridge.
The good news was that the judge's plans were slightly more attractive than those of the AHTD and that the new design included a 20' lane for pedestrians and cyclists. Unfortunately, that plan also came with a red, white, and blue paint scheme that has received very little support and has been widely panned.
Now, we're finding that the 20' bike lane will NOT be included in the Judge's plan.
This from Randy Ort, AHTD


As for the Broadway Bridge Bike/Ped lane, a 16-foot wide lane is the current design. There were discussions about a 20-foot wide lane, and we were willing to include that in the design as long as another entity agreed to pay for the additional width. At the present time, that has not happened. It is my understanding that Judge Villines did believe that the bike/ped lane would be 20 feet, but he learned recently that was not the case. He confirmed the 16-foot width in a conversation with our Director, Scott Bennett, just this week. 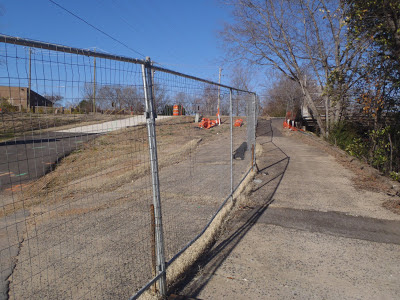 This place is part of the patchwork of sidewalks and bypasses that currently passes for the River Trail in this area. While some fresh promises have been made regarding a permanent solution along the river, I won't delve into those at this point. I've been fooled before.
Just tell it like it is.
I'll leave it to others to pursue this further, but many folks in the cycling community believe that promises were made and broken. On the whole, Central Arkansas is making progress toward becoming truly bike friendly, but, like any constituency, we deserve frank answers and transparency from our government. Like everyone else, we don't always get that.
Posted by JBar at 4:39 PM

After watching a portion of the Chenal Valley bike lane get destroyed (merging bike and vehicle traffic with almost zero warning) to make room for a turn lane on a road that rarely sees 2 cars in a row - and this happening within just a few days of hearing that the Kavanaugh sharrows were delayed because the city's crews were too busy cleaning debris (but not too busy to destroy lanes for pointless bike lanes), I have zero faith in what this cities directors or mayor tell us. Bike-ped LR advised me to go to meetings and support bike lanes - I was there at the city board meeting asking for the sharrows, but what's the point when they'll just lie to us anyway? A change is coming for me anyway, and this is a major factor in why my applications are all going to Seattle - but I still wish I could see this city really learn respect for healthy lifestyle and transportation. Cars are not the only way.