Along The Trail: More Projects

Sorry for the long gap between posts, but bloggers need vacations, too, and we bailed out to Steamboat Springs, Colorado, last week for a ski trip with the Little Rock Athletic Club. We had big snow, big fun and a chance to catch up with old friends in Steamboat. More on that to follow, but first I need to update you on a few River Trail projects.

Fishin'!
While cycling is the primary topic here, the River Trail is the scene for many activities, including fishing along the Arkansas River.The City of North Little Rock is supporting the popular activity with some infrastructure in the form of a fishing pier near the Burns Park soccer fields. 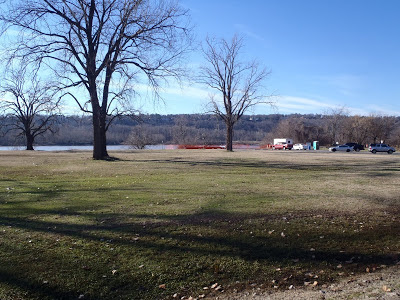 Construction materials are staged within the orange fencing. The pier location will be at a site slightly downstream near the tree at the far left in this photo.
The location of the pier will create a little cross traffic, but the spot was already popular with fishermen. As has been my position here, the more the merrier when it comes to trail use, as we are all allies when it comes to pulling for resources. Having a broad constituency makes it much easier for local leaders to devote revenues to the ever-improving trail system.
Shake, Rattle and Roll: Shillcut Bayou Bridge Replacement
I reported the pending replacement of the somewhat infamous "wooden bridge" in North Little Rock's Burns Park a couple of years ago; however, the requirements of the Corps of Engineers for flood zone construction pushed the budget out of reach at the time. Now comes word from Metroplan by way of NLR alderman Charlie Hight that a grant has been approved for the project. 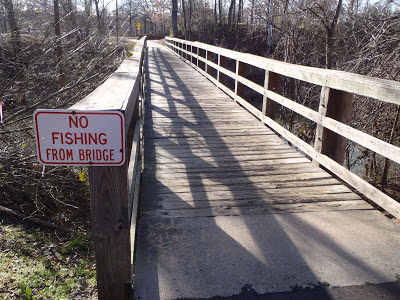 The narrow span over the Shillcut Bayou is built over a sewer force main, as I recall. It is to be replaced with a longer, wider structure slightly downstream.
Many riders complain about the tooth-rattling effect of the current bridge. My complaints about rough riding surfaces went away about the time that I started riding a titanium frame instead of aluminum. The narrow width is probably more of a legitimate complaint, especially for folks unaccustomed to passing at close quarters. Some riders get a little wide-eyed when they encounter oncoming traffic here! The rule for avoiding "target fixation" comes into play in such meetings: Keep your eyes on where you want to go---not on what you want to avoid!
Broadway Bridge
Pulaski County Judge Buddy Villines gained the support of the Quorum Court to provide funding for an enhanced Broadway Bridge design. The biggest plus for cyclists is that the new design includes a wider lane for pedestrian and bike traffic than was present in the highway department's plan. Many felt the AHTD plan was short-sighted in that it was possibly adequate for today's bike traffic, but would have been self-limiting for future use. The new design includes a double arch structure, which I'm all for, and a red, white, an blue paint scheme that I just can't buy into. Judge Buddy has proven to be a visionary of the River Trail system with the BDB and Two Rivers Bridge, but I don't like what I've seen of the color scheme and paint will require future expenditures for maintenance. It is meant as a memorial to veterans, but I think there must be better ways to recognize the sacrifices of so many.
More, more...
I've seen recent solicitations for bids to widen a sidewalk near the Clinton Library to facilitate bikes along with pedestrian traffic and Pulaski County has taken bids for a new plaza in Two Rivers Park.
The more we ride and talk about it, the more support we get from government. The success of projects like the River Trail leads to more!
Posted by JBar at 4:48 PM

Great Blog...Short soap box rant... As a cyclist I would like to say...widen sidewalk or not I don't ride on sidewalks. So if LR is to invest in cycling infrastructure it needs to be in the form of Sharrows, Bike Lanes or Bike Paths. The good news for me is I KNOW Mark Stodola only invests in ditches and I fear not him ever investing in cycling infrastructure. So next time you stuck behind a bicycle thank your mayor.

Rant well taken. I think the area in question is already in use as a multi-use River Trail connection. Mr. Stodola has been long on promises and short on action. There seem to be a few signs of movement,but,for the most part, the Little Rock Bike Friendly Committee has shut down and there have been discouraging words among bike advocates.Let's keep talking, though. We'll get where we need to be.