Ski Vacation: In Over My Head..

Well, up to my neck, anyway!
As is my prerogative, I sometimes go off-topic and bring you exciting non-cycling articles on subjects such as "What I did on my vacation." This is one of those articles. 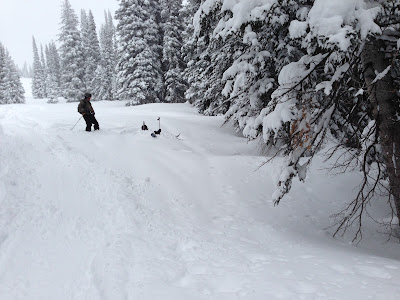 I'll go ahead and open with this photo to get it out of the way.
In the photo above, the dots in the snow represent my head and the tips of my skis. That white stuff is was joyfully welcomed around Steamboat Springs, Colorado, as about 2 feet of fresh "champagne powder". Experienced skiers live for the stuff. I could get some sense of the magic, but my level of confidence and ability prevented me from demonstrating my appreciation in any meaningful way.
Backing up a few days to Friday, January 25, Diane and I headed to Steamboat Springs, Colorado, in the company of a group from the Little Rock Athletic Club. Snow had been sparse in the area over the weeks prior to our trip, but we were greeted by several inches of fresh stuff upon our arrival. Saturday, our first day on the slopes, brought more snow, followed by a brilliant Sunday. 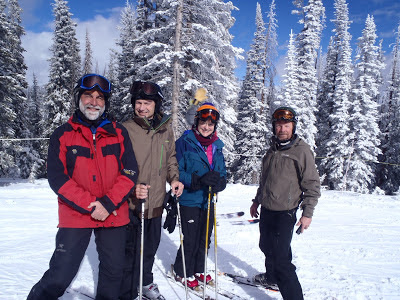 Diane and I were delighted that some of our Steamboat friends David Wallace (l) and Robert Orr (r) came out to play with us. We were all kind of squinty-eyed in the bright sun and snow. 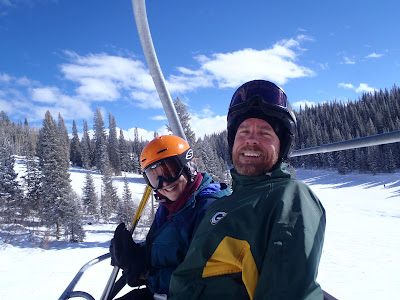 Arkansas Cycling and Fitness owner Richard Machycek joined us once again. Diane was the "house mom" in our condo, which we shared with 4 guys.
Up-front admission: I am not a very good skier. Diane is much better and is good about humoring me. I stick to the intermediate stuff and have had perfect strangers ski by and tell me , "Just relax". Hard to do when you're scared, but we still had a great time and fantastic conditions. By Sunday evening, winter storm warnings were flying and it snowed for most of the next three days, dumping another couple of feet of fresh snow on the mountain. 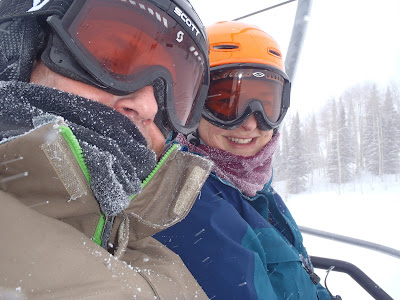 We love our technical clothing! It was 3 degrees when we left our condo and the high was 10 as it poured snow on our third day on the slopes. Amazing how comfortable we were in those conditions.
On our last day, the powder was impressive, the locals were out in force, and there was a lot of whooping and hollering going on. Most of the locals seemed to head for the expert and out-of-bounds areas because, while early lines at the gondola base were long, there were few folks in the intermediate areas where we skied. Our friends David and Robert were among the people heading for the woods and bowls, but they did come back to join us at lunch and then they led us off of the slopes and into the trees to sample some untracked snow. 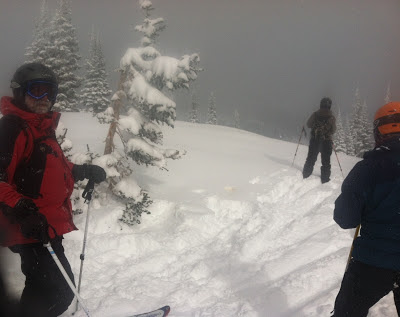 This course led to my fall as shown in the first photo, but it was amazing stuff. I'm more comfortable on water or wheels than on skis, but I'll be going back for some more of this.
OK, OK, BIKE STUFF! 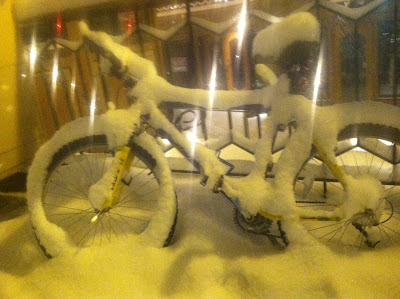 Colorado is home to some serious cyclists. Fat tired snow bikes like this one are catching on fast for their winter utility. Our friend Robert is training on studded tires. 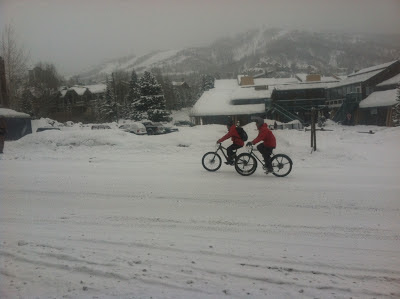 We saw quite a few folks apparently making their regular commutes by bike, weather be damned. Most of the mountain towns are built along river valleys, so getting around town doesn't involve as much climbing as might be assumed.
Nearly perfect!
The skiing was great, the company was charming, and the mood was relaxed. Everything was damn near perfect as I lolled in a heated pool preparing to get a group photo of a bunch of beautiful women soaking in a steaming hot tub..... 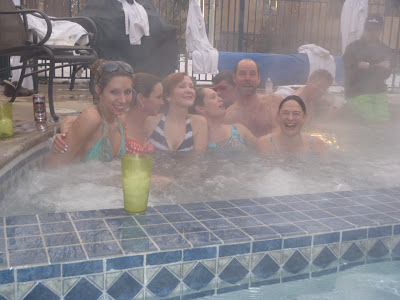 ...and along comes Richard!!
I joined this trip for the first time last year on an adventure to Beaver Creek. I had a little fall and an injury that was followed up by hand surgery in July and a month off of the bike. While my abilities strained my ego a bit, at least I didn't break anything this year. I'm calling that progress!
﻿
Posted by JBar at 2:58 PM

Once again, a very fun trip with a bunch of cool people! Can't wait till next year!

Your experience was great. Anyway, I better go to this place some time in the future. Regards!