I've been remiss in giving a call-out to CATA and the fine work they are doing in establishing and maintaining mountain bike trails around central Arkansas. Group president Bruce Alt, along with Mike Mitchell and others, has been involved in meetings I've attended over the last few weeks with the Arkansas River Trail Task Force and at Camp Robinson, and each time I see him, I promise to get around to an article.

Last night, as I rode along the ART, finishing up a road ride, I noticed some suspicious characters walking along the trail carrying paint cans and rollers. While they didn't have the look of the usual Krylon-armed bridge tagging vandals, I don't want to be accused of profiling.
I decided to circle back to see what kind of mischief the pair was up to.
As it turned out, they were heading into the Pfeifer Loop to add nonskid paint to some recently constructed bridges, so I flashed a thumbs-up gang sign to them and moved on.

(As an aside on profiling, I found myself feeling a bit guilty when I stopped to observe a couple of 12-14 year-old boys walking around between cars in a lot near the trail. There are a lot of break-ins in the area, but my suspicions were unfounded, as the boys were apparently just heading for some shade. The fact that one was wearing a flouro T-shirt with the word "THIEF" emblazoned across the front might have influenced my attitude.) Mike Mitchell and Bruce Alt of CATA on their way to work. 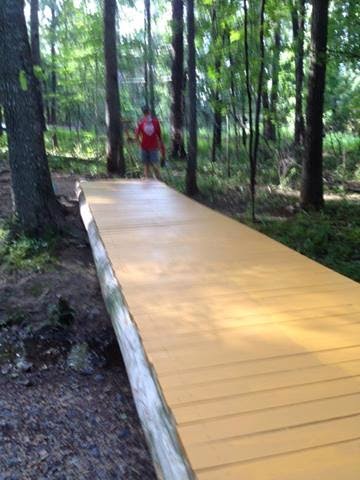 From CATA Facebook post:Two bridges painted with non-skid coating: Green Trail at Burns Park and the connector between Pfeifer Loop and the soccer fields near the paved Isabella Jo path. 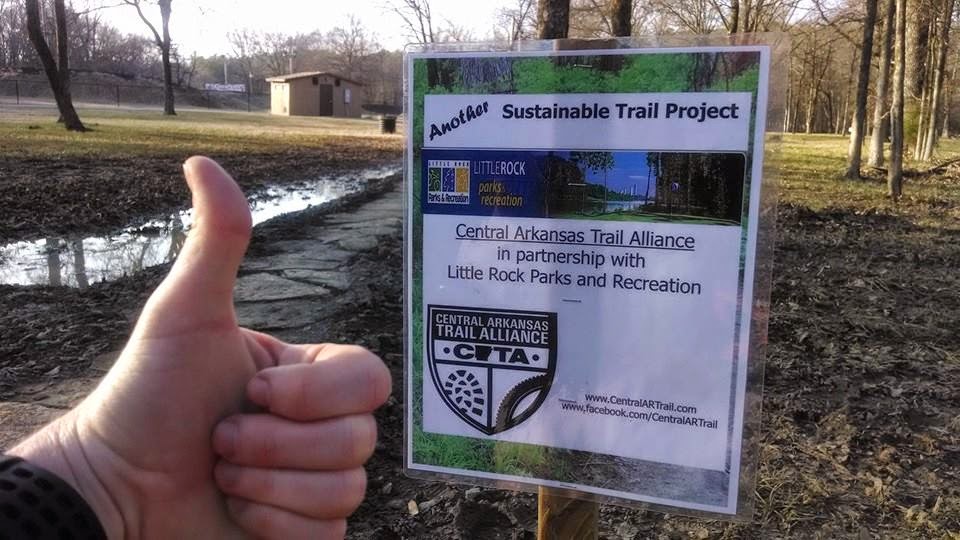 From the CATA website.
Visit the CATA website to see what the Central Arkansas Trail Alliance is all about, to see what they've been up to, and to join. Membership gets you IMBA membership, as well.
This is another example of the many people gwho give their time and talent to efforts to make cycling in Central Arkansas better for all of us. When you hit the trails and find bridges built, brush cleared, or, for that matter, when you consider the trail itself, you can bet that some volunteers worked to get it done.
A word to anyone in the market for a Subaru, the IMBA discount is a real deal. They offer the same program through the American Canoe Association and we have saved thousands of dollars on the purchase of a couple of Subies over the years.
Posted by JBar at 6:32 PM