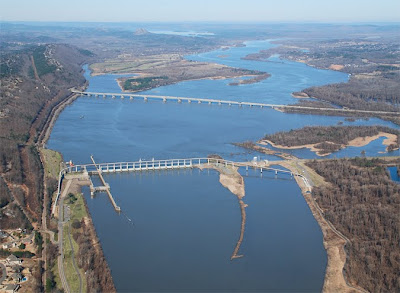 The bids for the much-awaited bridge to Two Rivers Park will be taken on November 19. This is fantastic news for the Central Arkansas cycling community!!

From the published bid request:

Pulaski County, Arkansas will receive sealed bids at the Pulaski County Purchasing Office at 201 South
Broadway, 4th Floor, Suite 401, Little Rock, AR, 72201 for Little Maumelle River Pedestrian / Bicycle Bridge,
Bid #09-A-012, until 2:00 P.M., on the 19th of November 2009 at which time and place all bids will be publicly
opened and read aloud.
The construction will consist of approximately the following:
Building a 1,162 foot long pedestrian/bicycle bridge over the Little Maumelle River. The bridge
superstructure will consist of cast in place concrete decks on five 50’ and six 100’ simple prestressed
concrete girder spans, and one 210’ prefabricated structural steel truss span for navigation. The minimum
navigational clearance in 39’-10”. The substructure will consist of cast in place concrete abutments founded
on driven steel piles and single column hammer head type piers founded on single column drilled shafts.
Other items of work include modification of existing trails and construction of new trails for bridge
approaches, modifications to River Mountain Road and parking area, installation of bridge and navigation
lighting and associated electrical work, installation of clearance gauges, and permanent signing and striping.
Posted by JBar at 3:39 PM 1 comment: 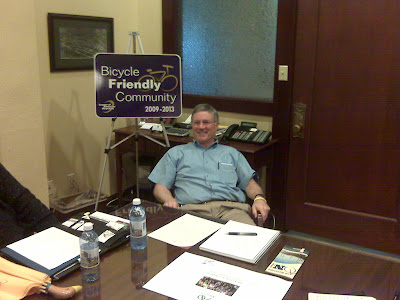 North Little Rock has been awarded the bronze level of the prestigious Bicycle Friendly Community Award by the League of American Bicyclists. This really is a big deal and is the result of the efforts of a committee consisting of Charlie Hight, Mayor Pat Hays and other members of city government along with several members of the local cycling community.
http://www.bikeleague.org/programs/bicyclefriendlyamerica/communities/

When NLR Alderman Charlie Hight invited me to sit in on the committee meetings last summer, they had already made substantial progress in the application process. Folks like Tom Ezell, Dr. Rob Lambert, David Holsted, Steve Bentley, and Judy McDowell have all been active locally in promoting various aspects of cycing and were instrumental in this effort. Bud Laumer of the Highway Department added his insight and experience along with city Planning Director Robert Voyles.

The announcement hit the Dem-Gaz on Sunday, but look for more news on this exciting development. I've already seen recognition on the e-newsletter Road Bike Rider and typically Bicycling magazine follows with a feature. NLR is the only city in Arkansas to receive BFC status. Little Rock, Fayetteville and Bentonville have all applied, with LR and Fayetteville getting an honorable mention.Bike Friendly Community status is an indicator of the progressive stance that North Little Rock has taken on quality-of-life issues. BFC cities typically rank above average in education levels, property values and public health. Congratulations to my home town. It makes me proud!
Posted by JBar at 5:05 PM No comments: 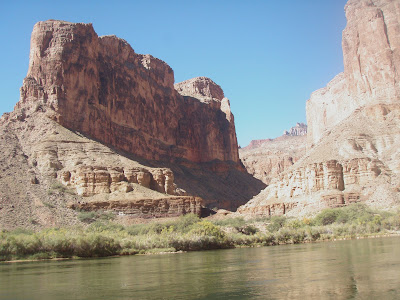 If you're interested in a mostly water-level trip through the Grand Canyon, follow the link to your right to my slide show of our recent trip. It doesn't require a lot of narration as the beauty of the place does most of the talking, but drop me a note in the comments section if you have a question or comment. There are not many kayak shots in the big rapids, as I usually had my hands full paddling my boat!
Posted by JBar at 1:27 PM 2 comments:

Re-Entry: No Flameout, But Not As Much Fun!!

I've never been off of work for three weeks; much less three weeks that included 18 days of teamwork, sand, 225 miles of Grand Canyon, no telephones, no electricity, no running water, nothing that we didn't bring with us (though we brought plenty with us!

Things are good at work as I got a lot done before I left and happened to have some big jobs ship, so I'm having a great month in spite of not hitting a lick! The long vacation goes down much easier with my boss when it is accompanied by strong sales performance. Therein lies the rub. I had to get my ass back to work.

Multiday river trips require a lot of daily physical labor beyond getting boats down the river. Every day starts with loading your bedding, tent (if used), and other personal gear in dry bags and getting it to the water to reload the boats. If you're on kitchen duty,as you gather your own stuff, you get to help your team of four cook breakfast for sixteen people. Then dishes have to be washed and the day's lunch packed.The kitchen has to be broken down along with the groover (toilet) and loaded on the rafts. Everything in the boats is in some kind of waterproof box or bag and secured to stay put in the event of a flip. We probably moved at least a couple thousand pounds of stuff onto and off of the boats every day in addition to hauling water for the kitchen, drinking and our solar showers. It's the satisfying kind of work that gets you to bed early and makes your meals taste better. Real world work just doesn't have the same feel, but for us it makes the occasional side trip to wild-world possible!
Posted by JBar at 9:17 PM No comments:

Back From The Great Adventure 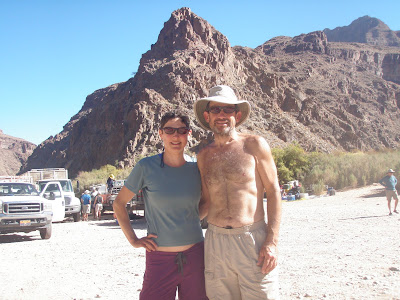 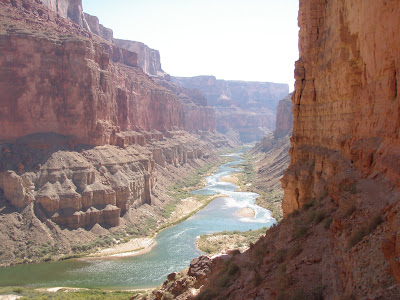 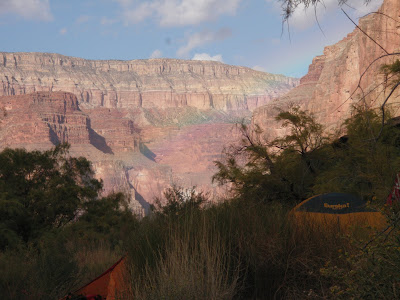 Diane and I have just returned from the great adventure of kayaking the Grand Canyon. With fourteen remarkable friends, we paddled 225 miles over 18 days from Lee's Ferry, Arizona to Diamond Creek. Our party consisted of 7 oarsmen on rafts and 9 kayakers. We were totally self-sufficient, carrying all of our provisions and equipment on the rafts and camping along the river. We had a sat phone for emergencies, but in the Canyon, even with a satellite phone, service is very sketchy. I'll have some photos posted somewhere soon and tall tales to tell.

The photos above are Diane and I at the take out, a view downriver from the Ansazi granaries at Nankoweap, and a rainbow over the canyon at one of our camps.
I got out on the bike Saturday for the first time in three weeks. It was tough coming back to civilization AND cool weather! My kayak-adapted rear also protested the return to the saddle! I went out and climbed Wye this afternoon and suffered about as much as expected but the beautiful day made it worthwhile.

NOTE: This has probably been discussed on various boards, but Pinnacle Valley Road is a mess due to utility construction. I'd describe it as unridable from Hwy 10 to Two Rivers.
Posted by JBar at 5:21 PM 1 comment: