For Those of You About To Ride the BDB....

This story is about a rider who went off of a span about 50 feet above a marsh after clipping a wheel and flipping over the wall of the bridge. Follow the link below and be sure to follow the link to the rescue video. I found this while cruising blogs linked to Carey Lowery's blog.

We met Carey in Colorado this summer as she prepared for a week of racing in Breckinridge followed by the TransRockies endurance race. In short....she's a badass!

Sunday, September 13, 2009
Base jumping
The so-called Virginia Beach curse struck again. I spoke to Elliot Craddock, 18, who launched from the Pungo Ferry Bridge this morning after touching wheels with another cyclist. According to Virginia Beach Firefighters, Elliot fell approximately 50-60 feet. The doctors at VB General told Elliot that a fall 20 feet is considered critical, so his even surviving a 20x3 fall is incredible. Two sets of cat scans confirmed that his helmet did its job today.


Yet another good reason to wear your helmet!!
Oh, and don't worry about riding the BDB......
Posted by JBar at 6:36 PM No comments:

Caution: The Nuts Are Out While cruising the trail with some boys last night, we ran across our good friend, Patrick........which has absolutely nothing to do with the subject of this article.

No, I'm talking here about acorns, hickory nuts, walnuts and their type. With the recent cool weather and heavy rains, these trail and road hazards are already falling, along with wind-blown leaves and small limbs.The big hard-shelled varieties like hickory nuts and walnuts are more likely to take a rider down than the lowly acorn, but the acorn can appear in great numbers, making up in ball-bearing efficiency what they may lack in mass.

Leaves can pose a slippery hazard and they can also serve as camouflage for nuts and rocks. It pays to remain alert, even as Fall marches on and your frequency of encounters with leaves becomes an everyday reality. A few of those leaves may be rocks. A whitewater analogy comes to mind involving a big wave-train rapid on a river we ran in Chile. Our guide explained that the huge waves could be run down the middle; however in rapids this big you only get a quick peek of the line ahead as you crest the waves. He cautioned to count the waves and then move right as you approach the last big wave at the bottom of the drop. The name of the rapid: "The Last Wave Is A Rock"
Posted by JBar at 11:49 AM No comments:

It's still going on in a big way, though the Fall races seem somewhat anticlmactic after this year's Tour de France drama. Dave Zabriskie won the Tour of Missouri after kicking ass in the time trial and showing why he's the 3 time US TT champion. He is also a very funny and quirky guy. After all, while Lance is promoting Trek and the Livestrong cancer message, George Hincapie has a high end line of bike clothes and a really high end real estate development and Levi Leipheimer is seen all over the bike press with Road I.D., Dave is pushing DZ Nuts chamois goo. You gotta love him!

Alejandro Valverde is in position to win the Vuelta a Espana. He still may face sanctions over doping allegations, so he needs to win a grand tour while he is able. He's never quite lived up to expectations but has shown moments of brilliance.

Speaking of guys that just can't quite get it done, Cadel Evans continues to have bad fortune and then bitch about it. He was 8 seconds back in the GC, then on a key climbing stage he flatted, got a slow wheel change from a neutral support car and lost over a minute. Got a bike change from his own crew as they weren't confidant that he had the right cassette and THEN got penalized 10 seconds when he took a bottle to put on the new bike. The dude has some serious luck issues. He needs to get some.

Those are the breaks...

Yes, and also top American cyclists who have broken bones in crashes this season. Those are just the guys who come to mind, but that's pretty much the cream of the crop.
Posted by JBar at 10:28 PM No comments: 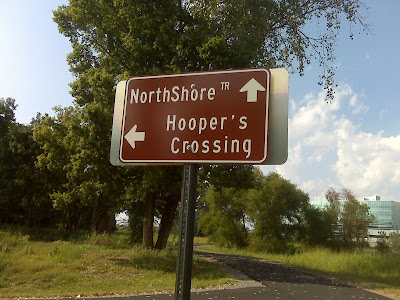 The popular Campbell Lake Trail portion of the River Trail has vanished! It is suspected that the Trail was taken by Canadians for use near their own Campbell Lake in British Columbia:

In any event,we need not fret as local businessman and trail benefactor Gene Pfeifer teamed with local governments to immediately replace Campbell Lake Trail with the new and improved North Shore Trail and a short connector, now called Hooper's Crossing, to the Isabella Jo Trail.

Confused trail users are advised to simply circle aimlessly until they reach familiar terrain.
Posted by JBar at 7:20 AM No comments:

A few weeks ago, I was riding from the sub on a Friday afternoon. As usual on Friday, there were few riders around but as I headed back through the downtown park, I noticed a rider walking along pushing his bike and talking on his cell phone. I surveyed his situation:
nice bike, full kit, flat tire, no seat bag
I had just written this post a few days prior:
http://jbarcycling.blogspot.com/2009/08/dont-forget-legal-tender-ultimate.html

I mentioned the article later and he allowed that he didn't have a cent on him, either. Fun!

As I approached, I asked the usual, "Got everything you need?", to which he looked up from his conversation and said, "Uh, do you have a pump?" and going back to the phone..."No, I don't need you to come get me, I need for you to bring my stuff. I'm riding home."

My kind of rider! Long story short, we chatted while I pulled out his old tube, replaced it with one of mine and aired his tire up with my CO2. He was very gracious in insisting that he'd pay me back. I was laughingly ringing him up as I worked; tube 6.99,a CO2 at about 3.50, total repairs were worth about a ten spot, but that he could just pass it on the next time he saw a rider needing a hand. "No, I'll pay you back." He asked my phone number and we parted. All in all, a pleasant exchange and it is always nice to be able to provide someone with a big favor in their eyes at very little cost or inconvenience to you. It was also positive for me because I'd just written a post about never leaving home without a flat kit and I was feeling, oh, so right! Ok, I know that gloating is unbecoming, but the timing was good!

Forward to the next week:
I came home to find a $25.00 gift card from Competitive Cyclist in my mail box. We had discussed CC as our "go to" bike shop and I guess that he called the boys and tracked me down, then more than followed through on his promise of payback. His follow-up was neither expected nor necessary, but the spirit of it very much appreciated. I haven't seen him since, but it's good to meet folks like John Taylor out on the road. My seat bag is reloaded with a couple of tubes and some CO2's but I'll bet the next time I see him, he'll be packin'! If he's not, I reserve the right to make fun of him.
Posted by JBar at 8:10 PM 2 comments: