'tis The Season..for Perfect Riding Weather along with....

....wind, pollen, rain, and a little of the usual minor trail user conflicts.

Spring is upon us. We are  past the vernal equinox and well into Daylight Savings Time. The long hours of daylight mean that after-work weekday rides are available to us regular working stiffs. As is the norm, March weather has been going through its usual mood swings, with summer-like mid-80's followed by downright cold mornings, so we are not quite to the point of being able to count on grabbing a pair of bibs and a short-sleeve jersey to be ready for the day's ride, but we are getting close.

This past Saturday was perfect riding weather. Sunday seemed to be shaping up to be the same, but 25-30 MPH winds made for painful work heading west. Add blowing streams of sand along parts of the trail to the clouds of pollen and the resulting conditions could have been more comfortable. Such is the pleasure and pain of March in Arkansas

On those recent days when the weather has been good, the expected large crowds have flocked to the River Trail. With that comes the usual complaints about the behavior of some trail users. Some of them are legitimate, as there are people who do not mind their manners, whether they be fast cyclists, long-leash dog walkers, or people who simply have no awareness that others are moving along the trail.
My friend Mike Moore recently posted a comment and photo on Facebook that took issue with people who allow their pets to leave large quantities of canine excrement, frequently referred to in conversation as "dog shit," on the Big Dam Bridge. While he got a lot of support, cyclists as a group came under attack from one writer who no longer walked his dog, who we will call "Beast" to protect the pup's identity, because he feared for the life of his Maltese or mastodon or whatever breed Beast may be, due to those madmen on bikes zooming around.

Let me make a couple of points on that conversation:
-There is no excuse for not picking up after your dog on a crowded paved surface such as the BDB. Assume that your dog is going to poop and pick up a bag from one of the dispensers on the bridge. You know, the ones with the signs that say "Pick up your dog shit" or something along those lines.
Former Pulaski County Judge Buddy Villines and current Judge Barry Hyde have threatened to ban dogs from the bridge due to the behavior of some pet owners. Nobody really wants to see such a ban but trail users get disgusted by the presence of so much poop on the bridges and they complain.
Also, if you keep your dog by your side and under control, nobody is going to run over him. The danger to the cyclist is usually more immediate than the danger to the dog. Self-preservation is a powerful incentive.

While the discussion of dog poop on the BDB always lends itself to a lively discourse, if you really want to get folks riled up,  post a complain about horse manure on the mountain bike trails. Of course, they are multipurpose trails, but I don't have a horse. 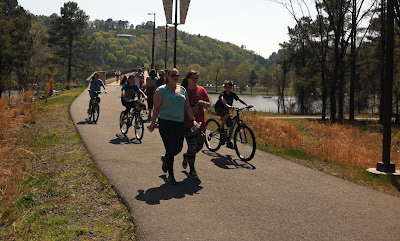 - Do not complain about the crowds when you choose to visit the busiest spots on the the Arkansas River Trail System on the first beautiful days of spring. Remarkably, many, many people will have the same idea and head to the same easily accessible and scenic points.
There are miles of lightly used trail in North Little Rock and on the back loops in Two Rivers Park. If you want solitude, you don't go to the Riverfest....or to the BDB and Two Rivers Park Bridge on nice days. 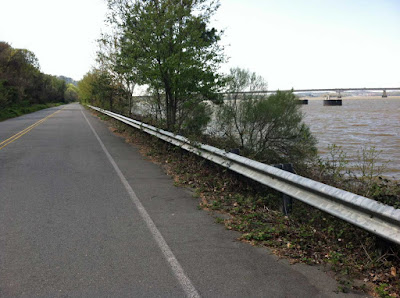 Sunday was cooler and very windy, so the crowds were thin in "the ice box" between Jimerson Creek and Two Rivers Bridge.

Cyclists seem to bear the brunt of complaints on shared trail systems and I have given the reasons a good deal of thought. The most obvious is that, yes, there are some rude cyclists, but there are also rude runners, walkers, mid-trail chitchatters, show-offs doing pushups, and free-range preschoolers.
I think cyclists get more complaints simply because we cover more ground. One on-your-left-barking, ear-bud wearing, time-trialing fool can cover the length of the trail in well under an hour, pissing off scores of people along the way. A long-leash dog walker with a couple of loose munchkins will likely only cover a couple of miles and a relatively small crowd  in the same time frame.

Folks, these can be the best days along the trail. Ride your bike, walk your dog, mind your manners and bring along your supply of mellow. Enjoy. 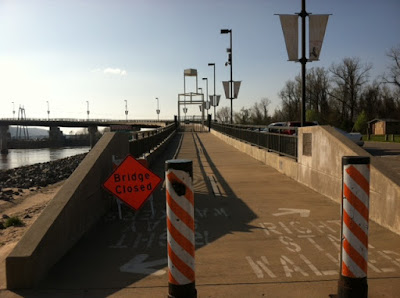 Build For The City You Want
During the course of the long discussion on the Broadway Bridge design and its bike-ped facility, I often heard the argument that few people walked or biked across the current bridge. The downtown areas on both sides of the river are growing in population density, and it is becoming obvious that the ability to dine, shop, drink and eat in one's own neighborhood is a huge draw.  So, if we want this kind of quality development to continue we have to expand those opportunities. That means, among other things, recognizing that alternative transportation resources are as important to those who use it as an open road is to drivers.
Posted by JBar at 10:37 AM No comments:

The BDB will be closed next Monday-Wednesday from 7:00AM-5:00PM for inspection and maintenance, so plan accordingly. 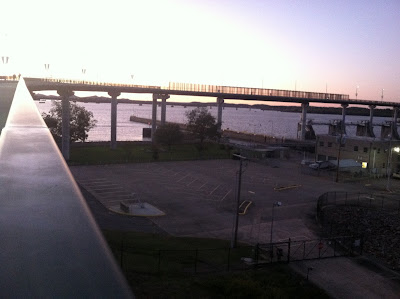 Monday also marks the first weekday of Daylight Savings Time, so we can cross the bridge after 5:00 and still have a couple of hours of daylight. While I am sympathetic with the poor little school children who will be huddling at their bus stops in the early morning darkness, they'll have to lay blame on the Bush administration. My reaction to the time change is, "Yahoo", and I'll give "W" credit.

Flood or No Flood?

Yesterday, the forecast was for the Arkansas River to crest at 18.5 feet at Little Rock, which would have caused considerable trail impact on the NLR side. Today's forecast shows a peak of 13.1 feet, which would not impact the River Trail. The rain seems to be tracking further south and east than originally predicted.
Posted by JBar at 3:49 PM No comments: