The revamping of the River Road  trail section near the Rockwater development will begin soon, starting with the milling of the existing asphalt as the area is narrowed to normal trail width. The project will also involve underground power, landscaping, and the installation of 15-18 decorative lamps. The work will be done by a combination of contractors and the employees of various city departments. That requires quite a bit of coordination and will make scheduling challenging.
Chris Wilbourn, an engineer with the city of NLR, is going to try to keep us updated on the schedule, but things can change from day to day.
The work may start as early as next week, so be alert to possible detours.

Bass boat traffic at the I-30 boat ramp.

Apparently, there have been some traffic conflicts between cyclists and bass fishermen at the launch ramp under I-30 between Fike's Bikes and the Clinton Park Bridge. On tournament nights, there are a large number of pickups with boats on trailers entering and leaving the area, and their drivers tend to pay more attention to their boats than to riders.
After a report of a couple of cyclists getting bumped, I got in touch with some city officials. I got the impression from the tone of the reports that it was nothing really consequential, but vehicle/bike encounters are never good.  The City is contacting the tournament organizers so that they can ask participants to use more caution, and there will be discussions as to whether some signs would help.
We share the resource, so be aware of the congestion and use appropriate caution in the area.
As usual, NLR City folks are engaged and responsive. Thanks! 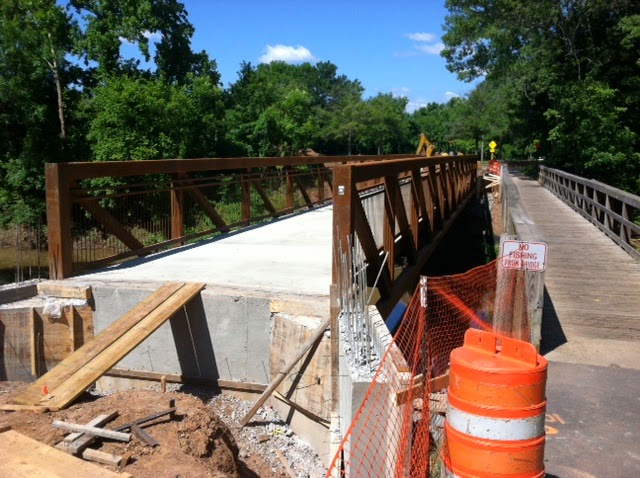 Do not use this ramp! The bridge will be open soon enough.
The new bridge should be opening around August 1, which is the original schedule. Construction was ahead of schedule but rainy weather has slowed things down. There will likely be a day or two of trail closures as the pavement is tied into the new bridge.
One significant change to the plans is that the old bridge will be closed to all traffic when the new one is complete. It was originally planned to leave it open for walkers, fishermen, and folks just wanting to gaze at the water, but recent inspections indicate that the structure is in poor shape.
Posted by JBar at 5:56 PM