By last Saturday, paving appeared to be about 50% complete on the new bike paths along Pinnacle Valley Road from County Farm Road to Maumelle Park. Completion of this project will mean that riders can pedal from downtown Little Rock to Maumelle Park with almost no exposure to motorized traffic. This assumes, of course, that one immediately crosses to North Little Rock in order to avoid the "moronic mile" trail gap in Little Rock. 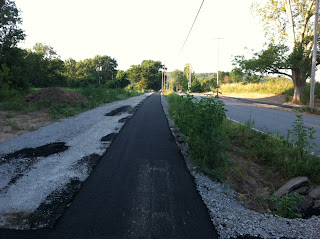 This will be another sweet addition to the Central Arkansas bike trail system.
The Two Rivers Bridge has opened the gates to bike traffic on the roads out west, there has been some concern over possible conflicts with drivers and with cyclists' safety. Traffic on Hwy 300 can be a problem on weekends, and on weekdays it is heavily used by commuters, many of whom have had to fight their way out Cantrell and Hwy 10. They may not be too patient with a gaggle of cyclists spread out across the road, so give them a break! Let them know that you're aware of them, then do your best to let them safely get by. Smile and wave (with all of your fingers).
Posted by JBar at 10:01 PM

"Moronic Mile" What a great name!

I bet I can get that name used at the next Little Rock Bike Friendly Community committee meeting :-)

"Moronic Mile" yep I wish Little Rock was half as excited and involved in cycling related planning as N. Little Rock, it's odd...

Bryon, feel free. You read it here, first!
I rode out to Maumelle Park tonight and, though I thought that the new paths were going to be paved the full width of the gravel bed, we may be seeing most of what we get. That said, I was glad to take to the narrow trail after getting brushed back by a speeding pickup passing cyclists on the other side of the road and coming within a couple of feet of me! Be careful.

I was out there this evening as well with a group of my friends - the path is pretty narrow but at least it gets you off the road.

We did an awesome ride out to Pinnacle Mtn, then down Barrett to Hwy 10, cut across to Garrison out to Ferndale Cutoff and then back. I had never ridden out there before so it was nice to ride somewhere new! Barrett & Garrison were very light on traffic too.

Just goes to show how the Two Rivers Bridge links up to western parts of Little Rock.