For the last several years, city leaders in North Little Rock have had their eyes on the Camp Robinson rail spur, a now-abandoned rail line that runs a little over 3 miles from Pike Avenue beneath I-40 in Levy to the point where it crosses Remount Road before entering Camp. The notion acquiring the spur was first brought to my attention by Alderman Debi Ross, and its potential as a rail-to-trail project has been frequently discussed by Mayor Hays and the NLR Bike Friendly Committee. Now, it appears that the project will become a reality as the North Little Rock City Council is set to meet in special session Monday night to approve funding. I received this from our alderman, Debi Ross:


The purpose of this e-mail is to advise you that Mayor Hays has called a special meeting of the North Little Rock City Council at 7:05 p.m. on Monday, August 8, 2011, at City Hall, Council Chambers, North Little Rock, Arkansas.  The following will be on the agenda:
1)      R-11-135 – A RESOLUTION AUTHORIZING THE MAYOR AND CITY CLERK TO PURCHASE CERTAIN REAL PROPERTY KNOWN AS THE “CAMP ROBINSON SPUR” FROM THE UNION PACIFIC RAILROAD COMPANY FOR A BICYCLE TRAIL; APPROPRIATING FUNDS; AND FOR OTHER PURPOSES.  Sponsors:  Mayor Patrick H. Hays, Aldermen Debi Ross, Beth White, Charlie Hight and Murry Witcher
Pursuant to Sec. 2-48(2) of the North Little Rock Municipal Code, you are entitled to 72 hours’ electronic notice of this meeting.  Please acknowledge receipt of this e-mail as soon as possible by replying to the same.  A copy of your reply will automatically be sent to City Clerk Diane Whitbey. 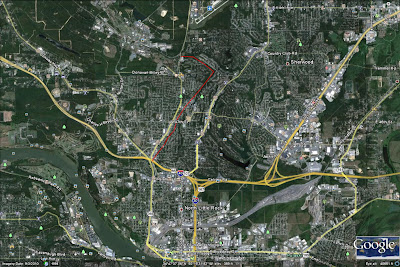 A bike path along the route of the RR spur, roughly following the red line above, has the potential for providing a key north-south link through the city, giving Indian Hills, Sherwood and Amboy residents safe passage through the heart of Levy. Parallel Camp Robinson Road is far from bike friendly! 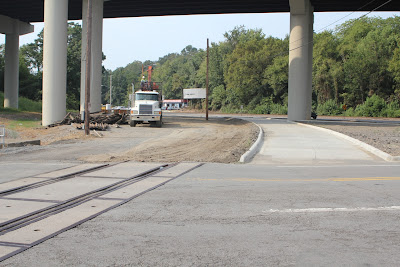 You can see that the rail line fits plans for bike routes in the city. In this photo, rails are being salvaged beneath the I-40 overpass of Pike Avenue at 33rd Street near a recently constructed section of bike/pedestrian path. 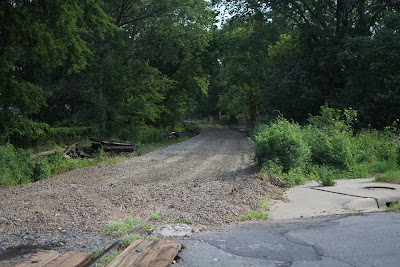 A few blocks to the north, the right-of-way with rails removed looks pavement ready! 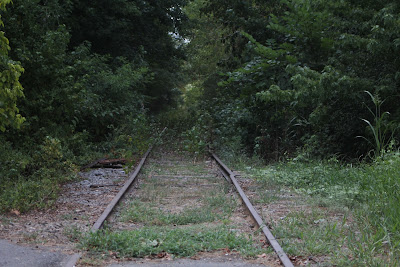 Most of the line runs through residential neighborhoods. This section, near Kierre Road, shows what most of the route looked like before the recent rail salvage operation.
As I understand, most of the folks along the right-of-way are supportive of the project, as neglect has resulted in the establishment of homeless camps and some criminal actitivity along the route. The trail, when developed, will be lighted with consideration given to protecting residents from the potential of lights shining in windows.
Thanks to Mayor Patrick H. Hays, Aldermen Debi Ross, Beth White, Charlie Hight and Murry Witcher for sponsoring the resolution to make this happen. While there are loud complaints these days about government spending, this is a unique opportunity to acquire a 3-mile right-of-way through the heart of a city and is money well-spent.
Since we're leaning on the subject of politics and money, I got some satisfaction from a recent DemGaz article concerning the a Forbes ranking of America's Most Livable Cities. In listing amenities that attract talent to the Little Rock area corporations, the bike trail system was the first thing mentioned in the DemGaz article, and it's become common knowledge that easy access to the trail system has enhanced residential and commercial property values along the Arkansas River corridor. In anecdotal evidence, I've heard lately of a Jackson, Mississippi couple who bought a second home in Little Rock so they can spend their weekends cycling, and another couple who retired here from Florida in order to take advantage of the cycling infrastructure. Proven quality-of-life investments make more sense to me than the targetless "economic development" sales tax increase being proposed by the City of Little Rock. While it is clear the Little Rock needs more funding for vital services such as the police department, the desirability of a sales tax to subsidize private business is less clear. Making a city a safe and desirable place to live seems to me to be more likely to improve our economic future than to spend millions in tax dollars to attract a few low payscale production jobs, which has too often been the result of "economic development" spending.
Posted by JBar at 3:05 PM

Jbar, do you know the name of the Jackson couple? I haven't heard of other folks from my hometown headed this way, but it might be nice to catch up.

BTW, the River Trail and Burns park were two of the main reasons my wife and I decided to relocate to Little Rock three years ago. Love it and haven't looked back!

I don't know the Jackson folks. They bought a place
next to a family friend, who related their story to us.

Jbar, thanks for keeping us all informed with your blog. Do we know if this 3 mile spur will connect to the river trail? I was just wondering if that was part of the plan or will it be it's own stand alone trail.

The current plan is to designate Parker St from Pike Plaza to River Road as a bike route. The intersection at Pike/Military/ Pershing is problematic, but manageable. This won't happen overnight, as there are hurdles to overcome, but acquisition of the rail right-of-way is a big step.

Betty and I visited here in 2005 when the BDB was under construction. She moved her business here by summer of '06 and I had the house sold and was here early in '07. We could have relocated pretty much wherever we wanted--both college educated professionals with lots of experience.
I had pictures taken on the rivertrail in NLR on my computer as screen savers at work in CA until we got the move done. Motivation to see the messy process of selling our family home, etc. See you out on the trial on the am. bud laumer