Well, OK, it's not quite camp. While crossing the BDB Thursday evening, I crossed paths with Shelby Burleson, who is the daughter of local triathlete Chrissy Fox and an excellent athlete in her own right. Shelby was on her way to meet Ernie Lechuga and some of her junior cycling peers for a training session on the empty streets of a nearby office park, so I circled by the area a little later to check it out. As I rode off the trail and onto the road, Shelby, Alex Bumpers, Garrett Phelps, and Zach LaVergne, all teens, rode by, being herded along by Ernie with the help of Wes Wolfenbarger. When Ernie isn't giving his time to help shape the fast youth of America, he can be found coaching alongside partner Scotti Welborne under the auspices of Leborne Coaching, or helping folks out with expert advice at Chainwheel. 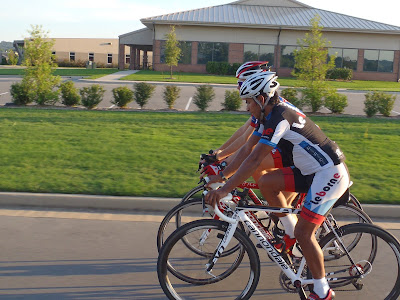 Ernie having a teaching moment with a couple of the boys. 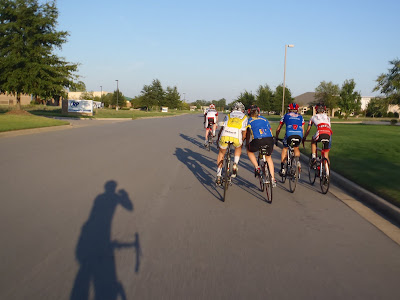 Wes working with Shelby on contact drills. Ernie was emphasizing the importance of being able to absorb contact. 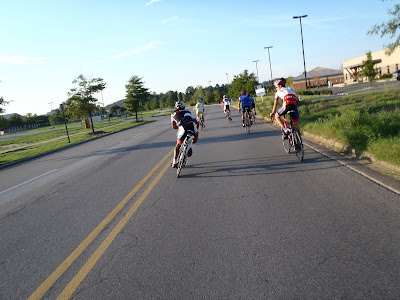 The goal is for the riders to be comfortable and in control of their bikes no matter the situation. 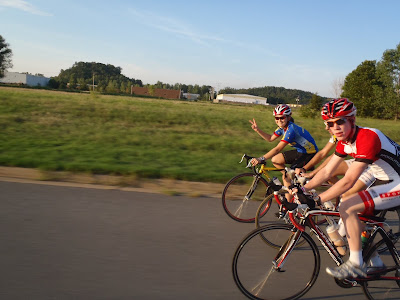 Shelby is wondering why female athletes are sometimes taken less seriously than their male counterparts. Zack, aka "Fabian", is just wondering.
Ernie has been doing the clinics on Thursday evenings, but I don't know his plans going forward, so if you're interested, you should give him a shout at Chainwheel or Leborne. We have some very talented young riders around town and it's gracious of Ernie to share his experience and expertise to help them grow as cyclists. I've ridden with all of these teens from time-to-time and they're all capable and responsible on the bike. I can't really vouch for them other than that, but perhaps they'll help persuade me that the country isn't going to hell in a handbasket after all.
Posted by JBar at 9:09 PM