The Spokes Cervélo bike demo held Wednesday evening was huge success, as Mat and the Cervelo rep quickly overbooked the event and had to start a stand-by list of riders eager to test a new Cervélo R3. The weather cooperated, as skies cleared and temperatures were mild at 91 compared to last Wednesday's 114, and the Spokes/ Cervelo folks were busy setting up bikes and putting on pedals. Mat hooked me up with an R3 equipped with a Shimano Ultegra drive train and some very sweet Mavic R-Sys wheels, while the road show bikes were equipped with SRAM Red. I ride Shimano so, though I would like to spend some time with the Red group, I was glad to have familiar gear for this short ride. 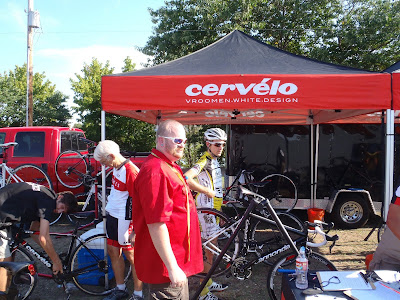 Steve, Adam and Wade were in the middle of things as riders got their pedals mounted and bikes set up. 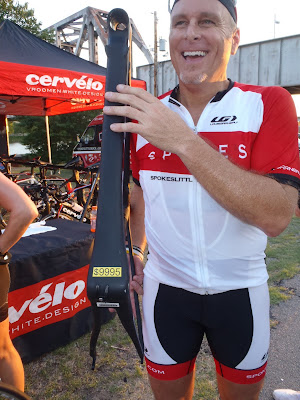 If you're into bike tech, follow the link to see what goes into this frame. I see that on the Spokes website, the price is listed at $9800.00. If you hurry, you can probably pick up a bargain. Mat is modeling the new Spokes kit, which I think looks great! I'm glad to see they deviated from the trend to black, as it's just too damn hot for Arkansas summers! 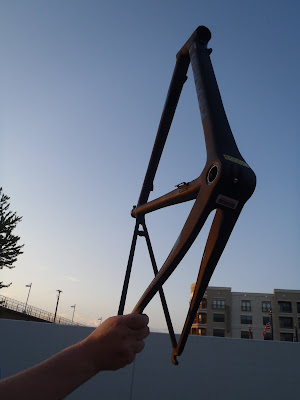 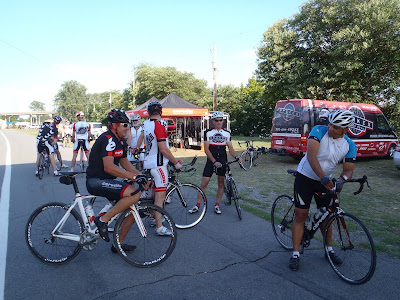 These guys are all sitting on new Cervelos and they're ready to ride. 26 riders showed up to check out the new bikes. 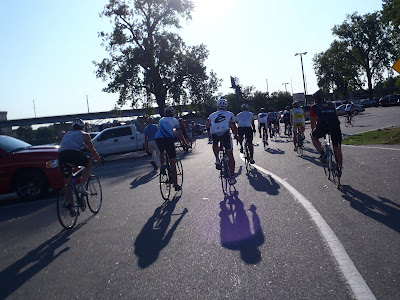 We rolled out to Two Rivers Park, with a side trip up Fort Roots along the way to see how this fleet climbed. The general consensus was that the bikes excel, though some seemed to be a little underpowered.
The ride route gave us an opportunity to get a pretty good sampling of terrain and road surfaces, including the little climb up Fort Roots and the sometimes bumpy, debris-heavy trails of Two Rivers Park. Whenever we hit open road, somebody would jump from the group, sparking the usual chasers as we checked out the acceleration qualities of the bikes. 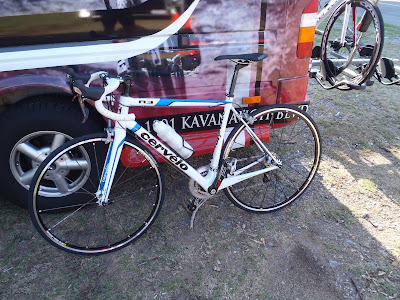 This was my ride for the evening, an R3 with Shimano Ultegra and Mavic R-sys wheels.
Oh, yeah, and white bar tape. Very EuroPro.
About the  Cervelo R3...
Earlier in the week, I visited with Scott at Spokes and we decided that I would ride a 54cm frame. We did a quick fit, consisting of adjusting the saddle height. After an hour or so on the bike, I was wishing I had checked the reach more closely, as I think the seat was set back a little more than my usual set-up. This isn't a real technical review, as you can get that anywhere, but I'll tell you what I think about the bike. First, I'll say that my front line road bike is my faithful Litespeed Ghisallo, 880grams of titanium frame with great road feel and a plush ride. It is also pretty flexible laterally, resulting in a little feeling of lag when initiating a sprint, even with my meager wattage.  That is not the case with the R3, as it feels like all of the power that you put to the pedals gets translated into speed.
The R3 frame is super stiff laterally, and yet it still managed to dampen the road buzz and bumps pretty well, resulting in a responsive feel with a surprisingly comfortable ride. Riders were commenting positively on the climbing ability of the bike but, though I had no complaints, our only climb was 10 minutes into the ride and I couldn't really form much of an opinion. I love the descent down Fort Roots, with its variety of broad, sweeping turns and fairly tight switchbacks, and the R3 carved through them all like it was on rails. I felt I was nowhere near pushing the limits of the bike, but it had a sure, solid feel going through the turns at speed. I ride the DuraAce 7800 group and by comparison, the new Ultegra had the same positive shifting and very impressive braking power, though I wasn't really comfortable with the ergonomics. The top of the hoods felt flat and square and my thumbs seemed to rest in the void between the levers and the body of the shifters. I'm sure that I wouldn't notice after a few rides, and it's possible that those impressions might go away with some tweaking of the bar position and fit.  The Mavic R-sys wheels are stiff and really spun up quickly. They got some bad press a couple of years ago when a Velonews staffer experienced a failure during a crit, but, if anything, that got the technology some close scrutiny resulting in a better product. I've had great experience with the Mavic wheels that I've owned in terms of performance and reliability.
When you stomp on the pedals of the R3, it jumps, and one thing that I noticed is that the bike seems to carry speed very well after an acceleration. Once it got going fast, the R3 wanted to keep going fast! It is not a particularly aerodynamic design, so I'll just say that it felt very efficient and leave it at that.
The R3 seems like a capable bike for anything you might want to throw at it. If you want a bike that will be a home on big climbs and crit courses and is still compliant enough for a century ride, consider this machine. There are a lot of fine bikes out there in this class, but I like the style that Cervélo brings to their products.
NOTE: If you missed out on this event, Spokes is bringing the Cervelo demo back on a Saturday in September. The Saturday date will allow more riders to be accomodated. Watch for an announcement on the Spokes site and here.
Posted by JBar at 6:30 PM