Most of us have participated in races, shop rides, charity rides, group or club rides, and  almost all of these events are held with some strings attached. USAC sanctioned events are governed by an extensive handbook and officials are on hand to be sure that technical requirements, such as junior gearing, are enforced and that other conditions are met in order to assure that competition is fair and is as safe as possible. Most participants readily accept these rules as a condition of the competition. Charity rides always require that riders sign a waiver in which they accept responsibility for themselves and accept that participation has some inherent dangers. Shop, club, and casual group  rides are usually much more casual about waivers and policies, but they all share one common requirement and that is that riders are required to wear helmets. 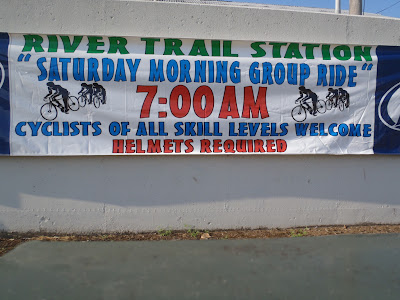 Helmets required? Who sez?
I've never seen a rider show up for a race or charity ride and try to insist on riding without a helmet. It just isn't done. Unlike races or charity rides, many group rides have no governing entity and may just be known as the "Tuesday 6 O'clock". Folks just show up and you can choose to ride on not depending on the mix of riders. Club and shop rides land somewhere in between in that waivers are seldom required, but all include the caveat that riders wear a helmet. There is some implied liability when any formally recognized entity organizes an event under the auspices of their business or club, so they have the right to set some conditions for participation. Other exclusionary conditions may include the wearing of headphones and the use of aerobars, both of which can compromise safety in a group. While most folks easily agree to any of these conditions, if for no other reason than that they usually ride that way, but what happens when somebody drops in and doesn't follow the rules-of-the-ride? If you're a ride leader, official or self-appointed, usually if you will remind the rider of the rules of the ride, the rider nods and says, "OK", and rides on, often to show up the next week with his helmet. If a rider just rolls out with the pack on his bars or with his earbuds blaring or without a helmet, about all that can be done short of a stick in the spokes is simply to express disapproval and ride on unless their behavior threatens the group. Most folks really don't want to be where they're not welcome and your cycling friends wouldn't put you in the position of having to say something to them.
Posted by JBar at 8:33 PM

John I know a couple of people who are grateful you didn't call them out by name. I don't even want to mention their (PN KF) initials---oops did I do that?

I really don't want to call anybody out, but you're free to! The wearing of a helmet is a rider's choice, but I don't want to be the one who clips a wheel and kills them. I also don't want to make it such a big deal that, as a matter of pride, a rider won't change their ways.I've been asked to address the group ride helmet, aerobar, iPod issue several times and feel it's important, but have hesitated to approach it directly here, though I've been known to do a little preachin'.

I've been riding/racing forever I'll rock out some basemiles with no helmet sometimes, especially with this heat. My chances of getting injured are just about the same as if I were running. But when it comes to drafting an novice's wheel who I don't know or anyone for that matter I wear a helmet no questions asked and I always wear a helmet during interval/sprint training I've had chains break/slip and know how quick you're on the ground.

While riding late Sunday afternoon over in the Two Rivers Park trail, I witnessed a lady (age 50+) crash her bike after hitting a small rut in the trail that had been covered up by pine needles. What was so scary was that the lady rider landed on her shoulder and then banged her head on the pavement. SHE WASN'T WEARING A HELMET WHICH WOULD HAVE PREVENTED THE HUGE KNOT THAT AROSE ON THE SIDE OF HER HEAD AFTER HITTING THE TRAIL. Needless to say this lady was very lucky in that her crash could have resulted in a much worse injury. I'm thinking that because she and her friend were traveling at a rather slow rate of speed is the other reason her injury was not more severe. After making sure she was okay, I asked about her helmet and where it was. She said it was a home and she promised that the next time she rode her bike she would wear it. I'll also mention the fact that her friend riding with her was helmetless also!

Finding an excuse for not wearing a helmet is the same as finding a reason why smoking a cigarette is good for you too.