Road and Trail Hazards: One Down, One Gently Moved on Along

A few weeks ago, my buddy Sam noticed a hazard on County Farm Road between Beck Road and Pinnacle Valley as we rode out of Two Rivers Park. 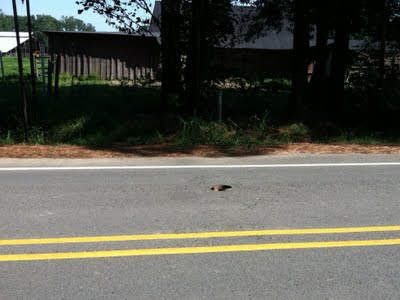 This "water cable cover" (OK, I don't know what it is, but it was called that in an e-mail by a knowledgeable type) created a hazard for riders and, as it turns out, it had been a nemesis for drivers, too. 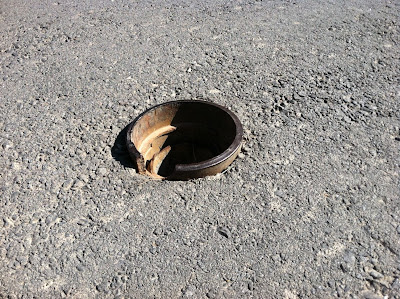 The lid has been knocked off and the flange broken, leaving nasty tire-eating jaws

Sam reminded me to take a photo for him this week, which he then forwarded to our friend Martin Maner of Central Arkansas Water, thinking it may have been a CAW fixture. Martin got in touch with Sherman Smith, Pulaski County Director of Public works, resulting in quick action. By the time I got out there Monday evening, the lid had been replaced and asphalt had been put in place to help protect it from further damage and soften the edges. 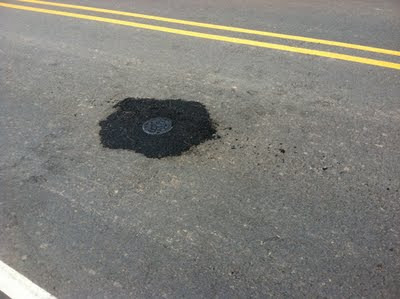 Thanks to Mr. Smith's department for the quick action. I'm grateful, as will be the neighbors and other drivers using the road.
It gets better.

Ok, Mister, Make My Day...
As I was stopped beside County Farm Road Monday evening to snap the photo above, I was greeted by a gentlemen who was feeding cattle just across the fence. He was glad to see the repair made, saying that they had averaged about one flat car tire per week at the spot. "You hear the 'pop' and then a knock at the door". His home was just across the road, so I had to ask him how he felt about the increase in bike traffic. I must say that after a solid week of mostly negative e-mail from my bike advocacy list, I expected to get a little blast. My new friend allowed that it was beautiful to watch the cyclists glide by as he enjoyed his morning coffee from his front porch. He added that several of his friends who lived out that way had started riding their bikes to work downtown. While he was at it, he mentioned that he had just put his house on the market and he expected the bike trail access to make it easier to find a buyer. I must admit that I had been a little depressed over repeatedly hearing the standard list of complaints about cyclists and here, before my very eyes, was a noncycling person who:
1- appreciated the sheer beauty of cycling and was not PO'd that he had to share the road with many cyclists on a daily basis.
2- noted that a growing number of everyday folks use the trail system ride their bikes for transportation.  Hmmmmm...45 minutes on the bike at dawn along the river or 30 minutes of the Hell that is Hwy 10? You pick. The fitness and fun would just be a bonus in that equation!
3- recognized that the proximity of his property to a bike route would likely enhance its value.
He was somewhat concerned about cyclist riding too far out in the road because some drivers are "old fashioned" or "set in their ways" or something to that effect, but that he had read the law and knew cyclists had a right to the road. That right doesn't mean being rude, of course, so riders, move it over when you hear a car back!
My day was getting better. As I rode back toward town, I ran into Nancy Elliott, who had tirelessly educated dog walkers and petitioned Judge Villines to prevent a ban of dogs on the BDB and Two Rivers Bridge. Nancy had her dog Freddie in a screened stroller, which he seemed to tolerate pretty well. Freddie has had back issues and is on vet's orders to lay off the long walks, but Nancy was enjoying Two Rivers Park. Cyclists passed as we spoke, so I mentioned to Nancy that there was a lot of discussion about trail use and that there were some loud complaints about cyclists. Her response was essentially that the trail is "wonderful" and "people will be people". Wow. More people happily getting along.

Moving along...
Actually, I encountered this trail hazard just after looping under Two Rivers Bridge as I entered the park. At the bridge dedication, Buddy Villines  advised the audience not to mess with the wildlife in the park. Advice well taken, Judge! 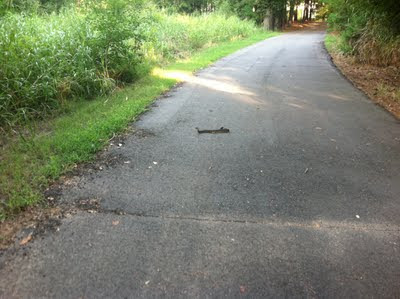 I came across this large, aggressive cottonmouth on the trail. He assumed the strike position as I rode by, showed no fear, and moved my way when I approached him.
You'll have to excuse the lack of a close-up of this subject, but all i had was the camera on my phone. I'm not particularly bothered by snakes, but cottonmouths have a bad attitude that I tend to respect. A couple walked up and we tossed a couple of pine cones to encourage him along so they could pass. When that didn't move him, the gentleman delicately wrangled him off the trail with a stick. Folks might want to keep an eye on their wandering dogs and roaming kids until first frost. I asked the couple how they were enjoying the trail and that word "wonderful" came up again.
Thanks again to the fine folks at Pulaski County for the road fix....and for the bridges, trails, and parks. And thanks to the happy trail people who brightened up my day.
Be careful out there, folks, there are hazards about and some are easier to spot than others!
Posted by JBar at 5:57 PM

thanks for the upbeat post, I needed this week.

Smart move on the Cottonmouth. The gentleman who moved it was a brave fellow. That is one snake not to mess with.

As has been posted its nice to see some positive comments from non cyclists.