Remembering Zuli- About A Dog

This has nothing to do with bikes, but it is something I very much need to do. It is very personal but needs sharing.
People who know me know that I love dogs and that I have always had a special place in my heart for my dog Zuli. Most of our cycling friends may not know our dogs, but they have been full-fledged members of our boating family for many years, so this is also a way of letting them know of Zuli's passing.


Sunday night, we had to put down our Zuli dog. Zuli was simply a very good dog who brought a lot of joy to most of the folks she encountered, but especially to me. We were often asked what kind of dog she was. My pat answer was that she was a blue-eye, leopard-spotted, flop-eared, bob-tailed dog. And a damn fine one; best of breed, I'd venture.

Zuli was picked up from a ditch near Lonoke by a soft-hearted neighbor as part of a batch of miscellaneous mutts that had been dumped by the road. The neighbor called and said we needed to see this puppy. We had just had a conversation about getting a second dog and had decided against it. We took a look and Diane simply said, "We need to take her with us". She was 10 pounds of blue eyes and spots, about ten weeks old and instinctively housebroken and loving. We had picked her up on our way to a Canoe Club Rendezvous, bought a tiny harness, leash and food on the way and introduced her to our boating community. She won hearts, ate the harness, and licked beer off of the tops of every can she encountered. She was my dog. 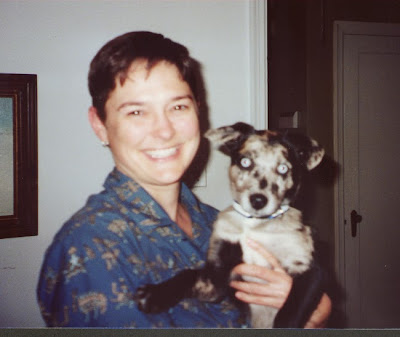 I had to add this photo of Diane with Zuli as a pup. 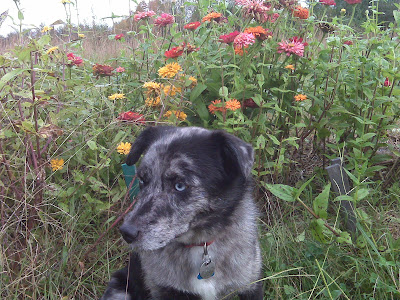 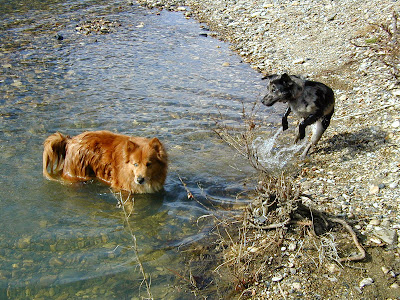 Zuli on shore patrol with Josie at the Cossatot.

Diane's dog Josie was already an accomplished river dog when Diane and I got together, and Zuli followed suit. They rode on the decks of our kayaks, ran the bank, swam the river, or hitched rides on the canoes or rafts of friends as they made their way down the creeks of the Ozarks. 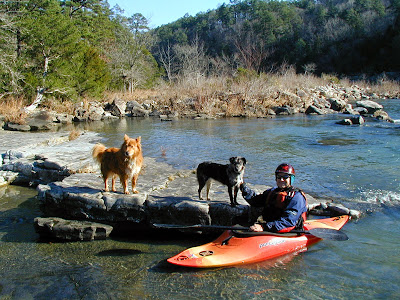 Taking a break at the Cossatot. 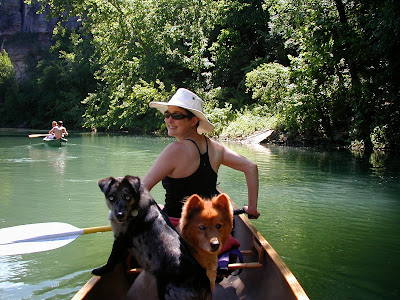 This is one of my favorite photos of my little family. Buffalo River 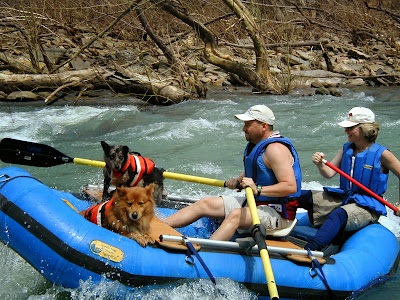 It's good to have friends! Zuli and Josie on the Big Piney with Jeff and Darla

Josie was 8-years old when we got Zuli, and we considered her to be getting old. She spent most of her days sleeping in an open closet at Diane's house and seemed to be slowing down. Little did we know that the introduction of of a wild, pesky puppy would give her new life. After Diane and I married, our house was often the scene of furniture-moving, floor-shaking "dog wrestling", punctuated by wild growls, sharp barks, and mad, chasing sprints around the house. Josie was remarkably patient, often allowing herself to be dragged by her tail across the hardwood floors. Whenever she decided that enough was enough, she would pin Zuli to the floor and order was quickly restored. 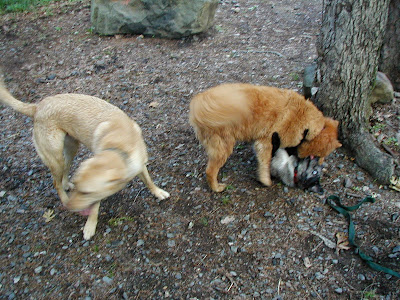 Josie was always the boss when she decided she'd had enough.

Zuli and Josie were quite a pair, and Josie lived to the ripe old age of 16.

Then came Willie.
Some months after the passing of Josie, we were open to getting another dog and Willie joined the clan.DNA testing showed him to be a finely bred Golden Retriever, Maltese, Poodle, Dachshund, Beagle, Chihuahua mix, and he fit in nicely. Zuli laid down the law to establish the pecking order as Josie had with her, and we were a two-dog family again. 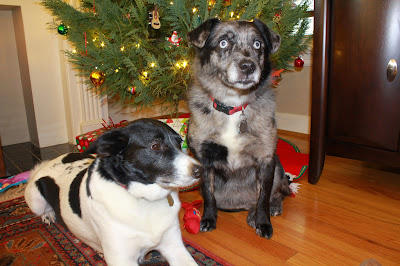 Willie is very laid back and Zuli had settled down by the time he arrived, so things were not quite as rambunctious around the house as in previous years, but they were good partners.

This is my way of saying goodbye to a little friend who brought so much joy to us for so long, and a way of sharing her passing with our friends who had the pleasure of knowing her lip-curling grin and her flying-dog routine. Zuli had a great, long life for a small dog. She was active and could still easily clear a 4' fence at age 12, so she got the most out of what she was dealt. Not too bad for a mixed up pup dumped on a Lonoke roadside.

It has been a tough couple of weeks here at the JBar Bunker. Diane's Dad, Ted Hannah, died last Saturday a week after his 80th birthday celebration. Ted led a full life as a Naval aviator, making over 300 carrier landings, and as a successful engineer, executive and family man. He was a great guy and will be missed by all who knew him. Diane said that Ted had really wanted to get another dog recently but his declining health would not allow it. He always loved Zuli, so I've got a mental image of Ted approaching the Pearly Gates with a blue-eye, leopard-spotted, flop-eared, bob-tailed puppy on his heels. "She followed me home. Can I keep her?" 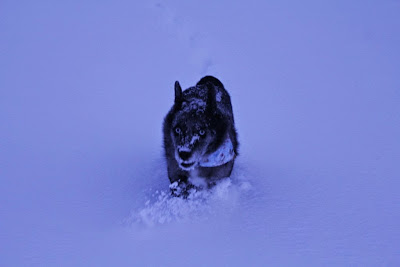 Email ThisBlogThis!Share to TwitterShare to FacebookShare to Pinterest
Labels: Zuli

Thanks for sharing John. So sorry for you and Diane's heartbreaks.

Well done Mr. Barton... Condolences to both you and Diane