This update from NLR Parks Wednesday evening. Though I think most of the trail will be rideable at 17.1 foot stage, this is "the word":


Things were getting back to near-normal on the North Little Rock side of the Arkansas River Trail before more rain fell overnight and into Wednesday morning. With the exception of the S-turn bridge just east of the Pfeifer Loop, the trail was dry and rideable on Tuesday night. A few areas in Burns Park and along Cunningham Lake that were submerged are still dirty but city crews have been busy cleaning off the worst of the silt and muck.
The situation is dynamic and subject to change by the hour, as the river is forecast to rise again, though not to last weeks levels. 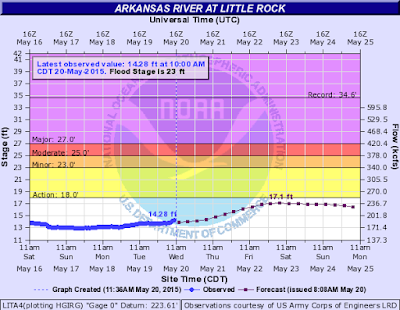 The Arkansas River peaked last week at around 21'. Current information as of lunch time Wednesday 5/20 predicts a rise to 17.1 feet by Saturday. 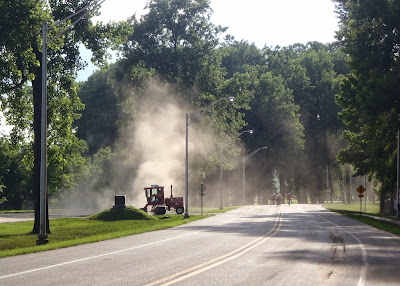 A group of riders approach as a city worker sweeps the dog park lot in Burns Park Tuesday night.

In spite of the closed gates and signs to the contrary, the trails were open to riders. That's not an official statement but the large numbers of riders who were crossing paths with busy park employees was a clue that it's Ok. I think they mostly want to keep auto traffic out for the safety and efficiency of the crews doing cleanup.Please be respectful of the fact that these guys are on the job. 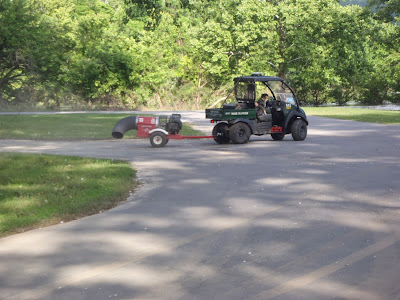 Ian and Shep doing their part.


I ran across ranger Ian Hope and goose dog Shep as they employed a blower-equipped ATV to clean silt from the Victory Lake parking lot. Shep was alert and keeping a wary eye out for geese or aggressive squirrels.

I'll provide updates as my schedule allows, but I think that cyclists will be able to ride the length of the NLR trail over the weekend, assuming no more heavy rains upstream. Some detours to higher portions of the trail may be required, and some park roads and parking areas may still be closed.
The Little Rock trail sections and Two Rivers Park trails are open other than the ongoing construction detours downtown.
Go ride your bike.
Posted by JBar at 12:04 PM