The CARTI Tour de Rock has become the second-biggest ride on the Central Arkansas event calendar,trailing only the BDB100 in popularity. Most years, Diane and I find ourselves on our way to Colorado on the date of the ride due to the fact that our vacation dates are tied to FibArk, which usually conflicts with the TdR. The fall of the calendar leaves us in town for this year's Tour de Rock, so I decided to register and join a recent training ride. There were a lot of cycling events on the May 2nd date, and it was a relatively cold morning at 49 degrees, so I was unsure how many riders would make the 7:00AM start time. 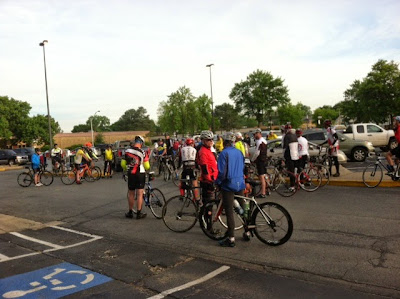 As it turned out, there was a very big group. What was unusual for me was that I knew very few of the riders.Most of the folks that I had ridden with before were Rock City Riders of the sponsoring Major Taylor Cycling Club. I would guess that there were close to 40 riders lined up as we left the U.S. Bank in Argenta and headed east. I met some really nice folks and thoroughly enjoyed our 55 mile ride, but I'm going to use my Saturday experience as the basis for a little constructive criticism.
Riding safely in a pace line requires that riders both comply with some fairly rigid rules and possess some specific skills. While the skill set must acquired over time and experience, there is no excuse for ignoring some basic protocol. Unfortunately, this group did not have a "capo" or leader with the knowledge and status to lay down the law. It is a common problem, and when there is not a recognized leader, most folks are hesitant to be that person, who is known is many circles as "asshole".
Here are three flagrant violations of protocol that I observed:

-Riding aerobars. Aerobars have no place in a pace line. If you have clip-on bars, stay off of them. Bike handling is compromised and your hands are off the brake hoods. You are a danger to yourself and others. The exception to that is when all riders are in agreement and have common goals such as time trial or triathlon training.  And in that case, drafting kind of defeats the purpose.

-Ear buds. Nobody should have to tell you that this is a bad idea. If you want to groove in your own world, ride by yourself....and pay attention.

-Littering. This is not specific to group rides or even to cycling, but is a universal. Unfortunately the roads of Arkansas are graphic proof that there are plenty of inconsiderate folks who don't get this. I saw two riders toss Gu wrappers on the road. Are you kidding me? Please show just a bit of class. Images of that practice on TV were giving Tour de France riders a bad name, so you will notice that they don't do it anymore. And you're not a Tour rider. There is no excuse and you give the rest of us a bad name. Avoid the sticky pocket by stuffing the wrapper up the leg of your shorts. You can properly dispose of it later, and your shorts are going to get a wash after the ride anyway, one would hope.

A strong leader and clearly stated expectations can clear up those problems quickly. I was taught early on that experienced cyclists are quick to identify sketchy riders and will do their best to avoid them. Few people want to be "that guy" once they understand the basics.

The skills are a little harder to come by, and extensive suggestions can be found elsewhere. Some things to practice on each ride may include simply riding steadily and standing out of the saddle without sending your bike back toward the wheel behind you. It sounds much simpler than it is in practice.
I spoke to one rider who was constantly closing on the wheel in front of him, overlapping the wheel (another dangerous practice ), and then freewheeling back into position. Every time he drifted back, a ripple went through the 20 riders behind him. He was a little frustrated but simply asked, "How do I do that?" Practice.  I found it to be among the hardest things to learn. Until you can ride steadily relative to the bike in front of you, just leave a little more gap so that your slight over-accelerations can be absorbed without braking or freewheeling. A gap of a few feet will keep you in the draft and allow a little margin for error.
Standing up abruptly sends your bike back about half a length relative to the bike behind you and is the cause a lot of crashes.  Before standing, check with a glance that there is some distance behind you, and I often simply say "standing" to alert the rider behind me. It is also easy to learn to shift to a higher gear and ease your bike forward as you stand. On long, flat rides many of us need to stand and stretch, so learn how to do it safely.

It is not my intent to criticize this particular group, as you see examples of these things (except the litter) in almost any group ride that has a good sprinkling of inexperienced riders. Take advantage of these rides as opportunities to teach, learn or both.
Be safe.
Posted by JBar at 9:03 AM

Bless you John,
I went on the previous ride and found the same thing and turned back at twenty miles.
There's a guy built like a linebacker rides an Italian bike beginning in B ending in I, avoid this guy............

This is good stuff!!! Ive never ridden a road bike before, but just bought one today. Im trying to learn all of the riding etiquette before hitting the road and riding with others. thanks for all the info. I would love to hear more

Earn free bitcoins from Easy Bitcoin. Up to 33 satoshis every 10 minutes.

Did you consider trading with the best Bitcoin exchange service - YoBit.