Recycle Bikes For Kids: Where Santa Gets The Work Done

I've mentioned Ron King's Recycle Bikes for Kids here before, and Tuesday night, I finally made it over to Ron's warehouse to see what was going on. The mission that Ron has undertaken is to take unused and unappreciated bicycles from basements, garages, carports and backyards and make them usable again. Then, he gives them away to kids. So far, 1126 bicycles have gone out the door in 2012, and Ron expects another 300 to 350 to be gone by Christmas. In addition to kids, Recycle Bikes has made bikes available to adults for whom a bike is their primary transportation in exchange for a little shop time. Some of the guys may not have a home or a regular job, but they can come to the shop and put a smile on the face of some kids while keeping their own rigs in riding shape. 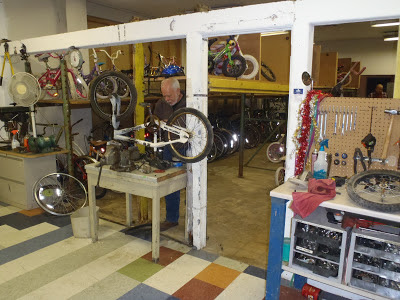 Ron bears a bit of a resemblance to a slim Santa. He has plans to expand the shop area into some of the warehouse space. On the evening I was there, all of his work stations were buzzing. 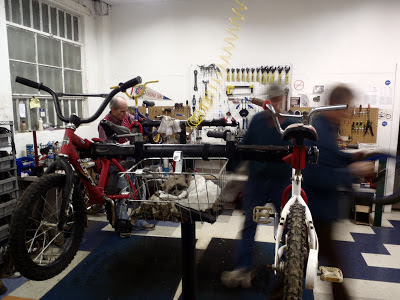 Volunteers were busily cranking out bikes for kids on Tuesday night. The work stations were well-equipped and well-organized. 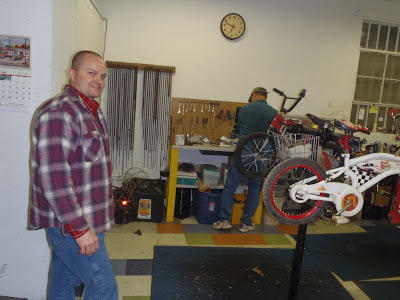 The regulars were much more adept with the bikes that we worked on than I was. I took on the Speed Racer at right and my task was unfinished at quitting time.
I know a little about bikes. I do most of my own work and can readily change a tire, adjust derailleurs, replace chains, cables and housings, adjust bearing preload, wrap bars, and in general perform most tasks associated with keeping my high-end bikes in good working order. Very few of those skills mattered when Ron pointed me to a small bike on a work stand. A volunteer named Gene had taken it on and he said, "Do you know anything about gears?" Sure, I know about gears. I was set to shine as I started on my first bike, only to meekly give up after finding that a cable had rusted in half within a housing and condemning two shifters gleaned from large box of salvaged parts. Many of these bikes were cheap to begin with, and feature a lot nuts and bolts. Servicability is not a common design feature. Ron shys away from multispeed bikes and coaster brakes are the stoppers of choice. I found that anything with a cable was problematic, as these bikes, for the most part, have never seen a drop of oil or a touch on maintenance. Cables rust into housings, shifters are jammed or broken, chains and chainrings are rusty. Open ended wrenches are the tools for the job and simplicity is favored over elegance.  Single speed bikes with coaster brakes are the set-up of choice for a reason. 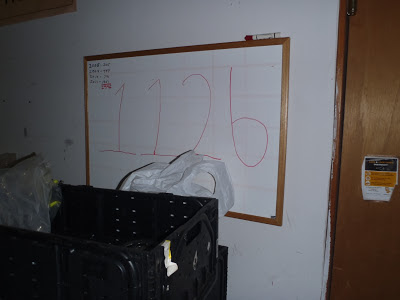 The "out-the-door" year-to-date tally.
Recycle Bikes for Kids was the benficiary of memorials for the late Brock Johnson, and that money enabled King to buy several cases of new tubes. Most parts are reclaimed and organized into large boxes that are mined for things like pedals, seats, and grips. On the night I was there, handlebar grips were in short supply and Ron was pondering where he could obtain what was needed.
I was pretty much a failure at getting bikes out the door, but Ron assured me that my experience was typical of first-timers. When asked what they needed, he said that usually it was volunteers, but that they are closing in on Christmas and they will take a little break afterward. They can always use repairable bikes, basic parts, and cash to buy supplies. The shop is a 1212 E 6th, behind Rocktown Distillery, and Ron's number is 501.952.4581. If you want to see where Santa Claus does some of his best work, give Ron a shout and lend the elves a hand.
Posted by JBar at 1:47 PM

A fascinating way to enjoy bike riding more! :) Two thumbs up for recycling bikes and for being a wonderful organisation.

Another note, YOU GET WHAT YOU PAY FOR if you buy a bike here. A friend and I used to go on bike rides between WG and Campbell, and they always stopped here for free tune-ups because they bought their bike at this place. electric bikes auckland