Report from the November BACA Meeting

Diane and I headed to the Capital Hotel for last Thursday night's BACA meeting. The shift from the long-tine venue of the Oyster bar to that of the Capital Hotel has certainly changed the feel of this get-together. We pulled up to the front door a little early, turned our car over for valet parking, and then eased in to join friends for beverage in the stylish Capital Bar and Grill. When set for a meeting, the nearby ballroom is much better than the O-Bar, in that everyone can actually see and hear what is going on up front.

Pulaski County Judge Buddy Villines was on the agenda, as was Lorie Tudor from the Arkansas Highway and Transportation Department. Buddy is a long-time builder of bridges and supporter of cycling infrastructure, so his appearance is no surprise, and he usually has some news about new initiatives or projects that are of interest to the alternative transportation crowd. Lorie's presentation, on the other hand, represented a bit of a shift in that the AHTD has historically been all about cars and trucks, while accommodations for cyclists and pedestrians have been largely ignored.

BACA president Tim McCuen presided over the program that included Willa Williams giving an update on the RR Spur trail development in NLR and announcing some opportunities for riders to begin training for League of American Bicyclists instructor certification.
Ron King spoke about his Recycle Bikes for Kids initiative and showed off an oversized $7500.00 check. The check was presented to Ron at the recent annual meeting of Garver, LLC, and was the result of memorials donated in the name of Brock Johnson, who passed away recently. Brock was the president of Garver, a good friend of Ron's and a supporter of cycling in Central Arkansas. 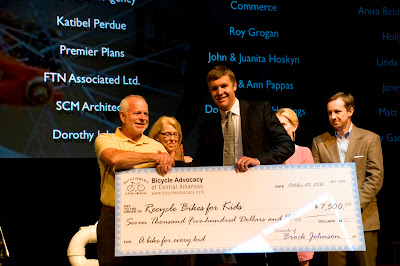 photo by Kelly Quinn
Ron King accepts a big check from BACA President Tim McCuen, as Paula Johnson looks on, at the recent Garver, LLC annual meeting. This memorial will help put a lot of kids on bikes. Brock would like that!
Recycle Bikes for Kids has given away 740 bikes so far this year, and will give away 500 more by year end. Ron gather bikes from wherever he can find them and refurbishes them to be given away. He also has a program so that adults can exchange work days for bikes. Most of the adults are homeless and the bikes serve as primary transportation. Ron has work sessions on Tuesday evenings and Saturdays. Give him a call at (501)952-4581 if you have a bike or some free time to donate!
Judy Lansky discussed plans for the November 25 Big dam Bridge Foundation's Full Moon Walk. Assuming good weather, the Full Moon Walk is a great way to introduce some friends to the wonder that is the Big Dam Bridge at night! Judy also started warming us up for Bike-to-Work Day, which will take place in May.
Gordon Fisher announced the annual Jingle Bell Ride to take place on December 1, which will head over to the state Capitol lighting and will include a stop at Diamond Bear Brewery for photos and the possibility of a sample. I would appreciate it if someone could share details or a link in the comments section below! 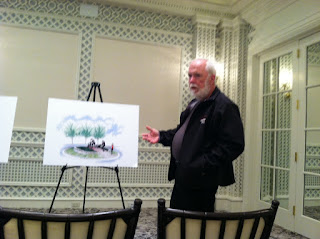 Judge Buddy Villines shows a rendering of a sculpture celebrating a family walking and riding, which is to be installed at Two Rivers Park. Donations will be accepted and sponsors names will be added to brick pavers.
Judge Villines always has some words of wisdom to share and usually has a project or two up his sleeve and this was no exception. He picked up on the discussion of the RR Spur trail, which goes from Levy in NLR to Camp Robinson, and said that when that trail is complete, Pulaski County intends to extend it to reach Sherwood and Jacksonville. He mentioned that since May, over 250,000 people had crossed the Two Rivers Bridge and that since August, when counters were put in place, 127,000 had crossed the Big Dam Bridge. Numbers like that should put to rest any questions about the value of those projects. Bids have been let recently for a plaza near the restrooms in Two Rivers Park, and plans are underway for a family picnic area at the site of the old Coast Guard station near River Mountain Road.
The Judge also mentioned some big plans or ideas for the planned new Broadway Bridge, but he was keeping his cards close on that. There was a mention in the newspaper of a proposal to paint the bridge red, white, and blue, but I think that Buddy has bigger plans than paint! 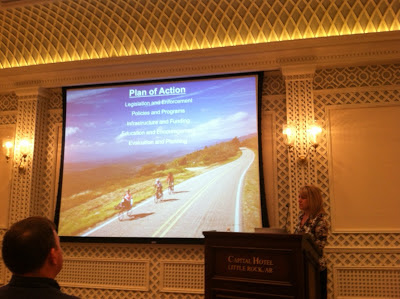 Lorie Tudor of the Arkansas Highway and Transportation Department laid out an initiative to pull Arkansas up in the bike friendly rankings.
Arkansas's ranking of 50th out of 50 in terms of Bike friendly states may have been a blessing in disguise, as it got the attention of Governor Mike Beebe. An upset Beebe called together an advisory group of various department heads from AHTD, the Arkansas State Police, Dept. of Health, Parks and Tourism, and the Commission on Law Enforcement Standards. Their purpose was to assess our current status and to make recommendations on how to move forward.
As a result, there will be a Bike/Pedestrian Technical Advisory Committee formed that will oversee things such as adding cycling law information to the state drivers licence study guide and exam, add in-service and recruit training for law enforcement personnel, and to work closely with the AHTD and with Parks and Tourism, which are seen as the key agencies as far as infrastructure is concerned. Funding has also been set aside to develop a statewide bicycle plan to include legislation and enforcement, policies and programs, education, planning and infrastructure.
Lorie provided a lot more information than I can relate here in my world of quasi-journalism, but let's just say that things appear to be moving in the right direction. One of the most telling statements was when Lorie quoted the AHTD director as saying something to the affect of  "Transportation isn't just about moving cars and trucks. It's about moving people." Sounds obvious, but it represents a change within what has often been called the "Department of Cars and Trucks" by cycling advocates.

Thanks to the Capital Hotel for hosting BACA. We stuck around to visit while enjoying another beer and a burger in the Grill, miking for a thoroughly enjoyable evening. I believe that Diane is going to start thing of BACA meetings as a date night. That works for me!

There is so much potential in this city and region, but a lack of education and awareness in motorists is a big part of keeping it unrealized.