Out in the dark

The sunsets just keep getting closer to quitting time, leaving far too little time for riding before darkness sets in. This coming Sunday, things will take a decided turn for the worse with the return to that sucky stuff called "standard time", which was placed into the American experience by the railroads. Time had been kept by the rising and setting of the sun and/or some local standard such as a clock in a town square, but railroads couldn't deal with it being 7:00 in one town and 7:16 at the next town down the line. The result is a necessary convenience in our so-very-connected world, but I digress. I could go for year 'round Daylight Savings Time, but the reality of living in the northern temperate zone is that days get shorter in the winter. Unless you are retired or work some undesirable shift, post-work rides are already ending after dark, and so require some sort of light. Fortunately, the technology of bicycle headlights has progressed rapidly in recent years with improvements in LED emitters and Lithium Ion batteries for ~$120-150.00, you can get a self-contained, USB chargeable,500-600 lumen (bright!) headlight that is more than adequate for a couple of hours on the River Trail. To get the same light output even 5 years ago, we were looking at spending $500.00 and lugging a battery pack weighing half as much as a nice road bike. 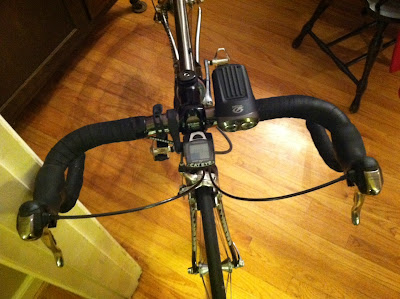 The latest generation of bike lights is compact, self-contained, and bright!

Any of our local bike shops have such lights in stock by Light and Motion, Serfas or Cateye.
Note: The electronics on some lights can conflict with older wireless computers. If you use old stuff like I do, it may be worth testing a light with your cycle computer.

Dress For Success
I've already written about gathering your winter bits for riding in cold weather. The problem is often knowing what to wear for any given condition. Even with experience, it is easy to be fooled into wearing too little after stepping out on a bright sunny morning, or overdressing when faced with a dreary overcast one. I suggest keeping notes. I keep a ride log and include weather data and, in winter, notes on what I wore for the conditions. An entry might look like this: 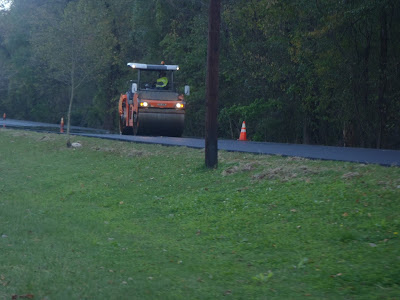 Rolling out the hot asphalt!
The City of Little Rock has been under fire for failing to deliver on many promises made to the cycling community. I won't enumerate those shortcomings at this time; instead, I'll commend them for following through on a promise to make a priority of the resurfacing of Rebsamen Park Road. The existing bikes lanes were pot-holed and littered with debris, which drove cyclist into the traffic lanes for some measure of safety. Hopefully, the newly paved and marked surface will make things better for drivers and cyclists alike as we share the road.
Two Rivers Park Work Station 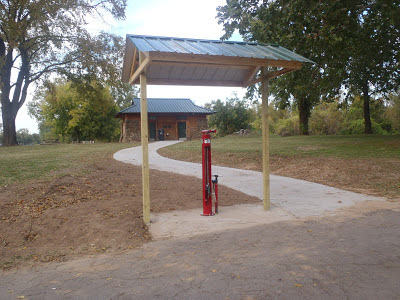 The new bike repair station is in place at Two Rivers Park. 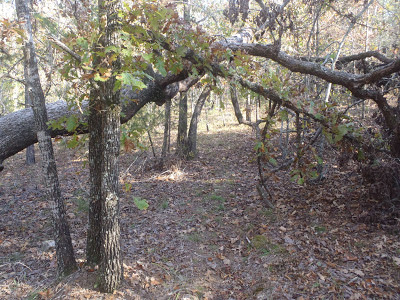 This large fallen tree makes a natural arch over Flatlands Loop.
I took a day off on Monday to take care of a few small chores and to ride at Camp Robinson for the first time this season. I rode 10 Bridges, Airport Loop, Buddha, Ball of Nails, Flatlands Loop, Elevator, and Outer Loop. The trail surfaces were remarkably clear and in good shape. As usual, falling leaves are covering the trails, obscuring them in places, but the surfaces are hard-packed and recent dry weather means there is very little mud and the water crossings are easily dealt with. The only thing that this trail system really needs is more traffic! You can revisit access information here.