What Next: The overwhelming weight of being Lance

I've been asked by several readers why I have yet to weigh in on the Lance Armstrong news/scandal/tragedy/whatever-it-is. I've actually expressed my opinion in various contexts over the years in a number of posts, and my basic position hasn't changed all that much based on recent detailed revelations. When asked in recent years if I think Armstrong doped, I've answered, "yes". I think that he went about doping much as he went about his training, equipment selection, and marketing plans; with cold calculation, intense attention to detail, and the rigid discipline of a champion. Self-serving and self-sacrificing at the same time.

Was he an egocentric asshole? Yep.

Did he step on a lot of people along his path to glory? Yes.

Was he a remarkably gifted athlete who attracted huge numbers of fans and unprecedented sponsor dollars to cycling. Hell, yeah.

Should he alone have been singled out from among his peers for a years long investigation?
I'm not so sure about that.

Some folks feel that if he had simply confessed that he could have been forgiven. Jan Ulrich never confessed. Ivan Basso never confessed. Vinokourov never confessed.
All were busted, though none of them have ever faced the overwhelming degree of investigative fervor and sweeping retroactive sanctions that were unloaded on Lance Armstrong. Is it because of his success, his arrogance, his lack of repentance? All of the above? Likely.

It remains to be seen whether he can carry the weight of the lies, but he is in a unique situation. Much of his compensation over the years was conditioned on him not using PEDs (as, I'm sure, was that of other leading riders) so that he puts himself in a massive trap should he elect to come clean. Nike, Trek, and others may be distancing themselves from him today, but they, too, reaped huge benefits from his endorsement deals and I don't think that they'll be lining up to repay consumers who might now be a little embarrassed at having shelled out big dollars for a yellow Madone.

I know that what was done by many riders over the years was wrong. They were cheaters in a world of cheaters. The losers are not you and I, but the riders who couldn't compete because they chose not to compromise. Unfortunately, we've never heard of most of those guys, and there may have been a few among them who could have risen to the pinnacle of the sport had there truly been a level playing field. On the other hand, Lance Armstrong didn't create the world in which he competed; he simply excelled in it. Riders like Marco Pantani stood between Armstrong and glory, and I don't think that there were many white knights at the top.

I'm not going to close this post with a conclusion, because I can't seem to come to one.

On one point, Lance made me a little proud...
I busted Lance long ago for shilling for near-beer, but in all the commercials and print ads for the product, it appears that he never actually took a drink of Michelob Ultra! For that, he can stand tall and knock back a Shiner. 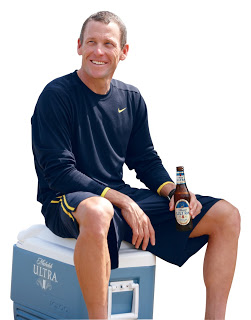 The Look? What kind of look is this? Is Lance waiting for a friend to bring real beer?
Posted by JBar at 3:13 PM

Does this make my red white and blue usps trek worth more or less? Thats all that really matters isnt it?

A cooler full of Ultra obviously makes a nice seat. Ultra is also a good additive for your "sample" to cut any substances that may have found their way into your system through eating copious amounts of 'roid-enhanced beef.

Lance is/was an asshole. He tried to destroy people who confronted him about the doping. I don't think Ulrich, Basso, etc. tried to ruin the lives of people telling the truth. Pharmstrong is getting what he deserves.