Along The Trail: Many Projects 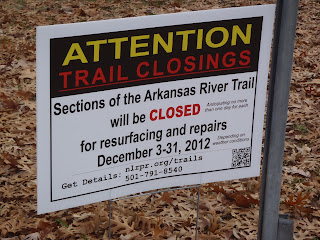 Signs like this are posted along the NLR River Trail. There are additional signs marking start and end points of specific work zones.

North Little Rock Parks and Recreation has announced trail closures along the River Trail beginning Monday, December 3, and continuing through much of the month of December. Commuters should pay particular attention, as some closures will require lengthy detours. I believe that the most extensive work will be in the area between Burns Park launch ramp and the Big Rock Quarry, where the trail will be overlaid with new asphalt.

I love it when somebody does the typing for me!
This press release from Jeff Caplinger NLR Parks:


Trail layout and foundation building should be completed this week and paving of the trail will begin shortly thereafter with anticipated completion in mid- to late-December 2012.  We will update you on the date of the grand opening ceremony.


Work on the Levy Spur Trail Phase 1 (33rd Street to 52nd Street) is underway.  The anticipated completion date will be in early-January 2013.


Resurfacing and repairs to portions of the Arkansas River Trail will begin next week.  A list and a map of the areas are available at our web site (http://nlrpr.org/trails).  Some of the repairs will be spot repairs which will minimally affect trail use.  However, some portions will be completely closed which will close the trail to through traffic (anticipating no more than a day for any one section).  Anticipated completion is December 31, 2012 (dependent upon weather conditions).  We cannot guarantee the date when a portion will be closed, but as we are given a date (usually a day in advance), we will update the web pages below.


These updates have also been posted to our web site and Facebook pages:


If you have any questions or need additional information, please contact me.

After several members on the LR Bike Friendly Community Committee resigned in frustration over Little Rock's lack of progress and broken promises in regards to bike infrastructure and and policy issues, it appears that the City is making some positive steps.
In addition to the Rebsamen park Road project, a section of 12th Street has been reconfigured from 4 traffic lanes to 2 traffic lanes with adjacent bike lanes and a median. This "traffic calming" configuration is designed to make the street more safe for cyclists and pedestrians while reducing the tendency of motorists to exceed posted speed limits

Broadway Bridge
Judge Buddy Villines had promised a major announcement at the end of November regarding the Broadway Bridge replacement project. News slipped out early that his prosposal involved painting the bridge in a red, white, and blue motif to honor veterans. My first reaction was, "Really? is that it?" As it turns out, Buddy was apparently holding details of the grand plan until he could present it to the Metroplan Board at their monthly meeting. His double-arch design would include a 20' bike and pedestrian lane, which is a huge improvement over AHTD's 14' proposal, but it would also include the red, white and blue paint design and an LED lighing scheme that would appear as a waving American flag.  Pulaski County has $9,000,000.00 in hand for the bridge and the proposal would require and additonal commitment from a couple of years worth of the county's road and bridge fund.
I strongly support the Judge's ideas on the structure of the bridge, but I think that we would all soon tire of the red, white and blue paint job and the waving flag design would be better rolled out for Independence and Veterans' Day events. I think that the NLR and LR mayors were both taken aback by the proposal, as I understand that they both abstained from voting on approval. Villines's plan would require a complete new design from the ground up, according to Highway Department officials.
Judge, you're the bridge builder and we appreciate your efforts, but I think that we can do something that will  serve central Arkansas and better stand the test of time while still honoring our veterans. The new Broadway Bridge could be with us for 100 years, so I think a more subtle design approach could be called for.
Posted by JBar at 12:04 PM

20 inch bike\ped lane is awesome...but yeah although it would be awesome 4th of July, Memorial Day, Veterans Day etc...Red\White\Blue Flag waving would be a little tacky 24/7.