Merry Christmas to All From Here in the JBar Bunker

Christmas dinner plans at the in-laws went on hold as freezing rain started falling in advance of what was accurately forecast to be a major weather event here in central Arkansas. 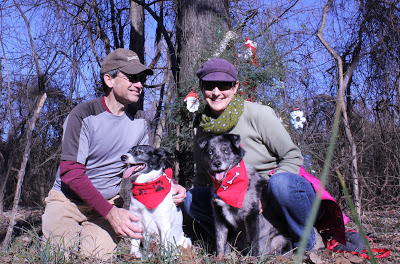 Before the Storm: Diane and I took Willie and Zuli for a stroll along the River Trail over the weekend and paused to take photos at this decorated tree along Pfiefer Loop.
The last few days have made for some nice road rides, but the Christmas Day weather  forced me to forgo one of my Christmas traditions. I usually ride to Diane's parent's house in Pleasant Valley, a 13 mile trip that takes me along the River Trail, across the BDB and up River Mountain Road. Though I've had a few really harsh Christmas Day rides, most have been quite pleasant, and it is always fun to see folks out showing off their Christmas toys, which can range from Pinarello Dogmas to poodle dogs. In looking back over my ride log, I see that most of my Santa rides have been pretty nice, though on my Christmas 2009 ride, the temperature was 34, with a northwest wind at 10-20, and in 2010, it was 38, spitting sleet and rain, with 20-30 MPH winds.  I'm a hardy rider, but Tuesday's rain, sleet, ice and snow would have put me firmly into the heated seat of Diane's Subaru rather than in the saddle. Would have, that is, if we had not received word at 2:30 that the in-laws' power was out. The new plan was to pool resources with neighbors for a feast; we have dressing, green bean bundles, cranberry salad, and beer. They have turkey, wine, and sweets.
Jingle Bell Ride
We hooked up with some CARVE folks on Sunday for their Jingle Bell ride around the River Trail. It was quite festive. 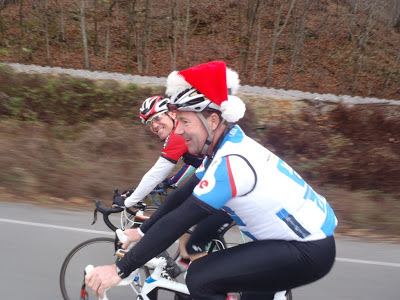 John Kelly seemed to be trying to convince Chuck Richesin that he had been a good boy all year long. I don't thank that the wise elf is buying the story. 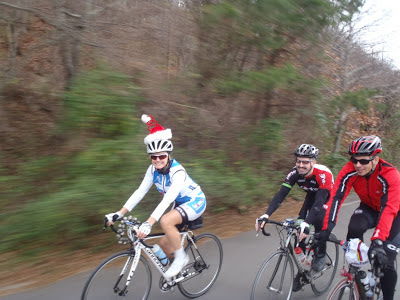 Libby Davis was also smartly topped off with seasonal headgear. 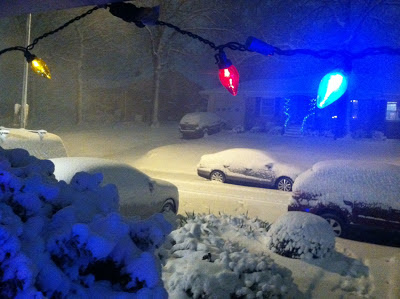 As I finish this post, the snow is still pouring down. Our internet service has been up and down all day, but we have power, unlike many of our neighbors, and we're warm and well-fed.We're going to call it a good day.