A Fall Saturday Along The River Trail

Well, my plan for a long day in the woods yesterday didn't pan out, so I settled for a couple of leisurely hours along the River Trail. While cruising through Argenta, I noticed a lot of noise and a pretty big crowd at Dickey-Stephens park, so I rolled up to the fence to see what all of the ruckus was about. I spotted a young couple with their kids within shouting range and asked them what was going on. It turned out to be one of my cousins and her family and the event was a whiffle ball tournament. The early afternoon beer was flowing and everybody seemed to be having a large time. 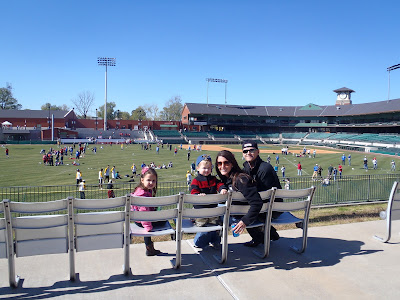 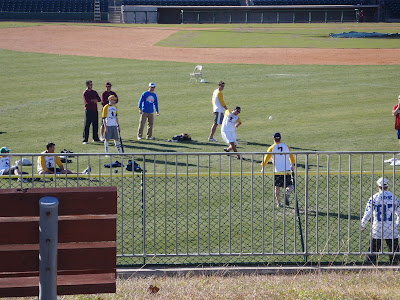 The action was fast and the mood light at the whiffle ball tournament.
Things did not go so well for one rider that I encountered. He had taken the curve at the S-Turn bridge a little too fast and crashed his tri bike. The result was an apparently broken collar bone.﻿ 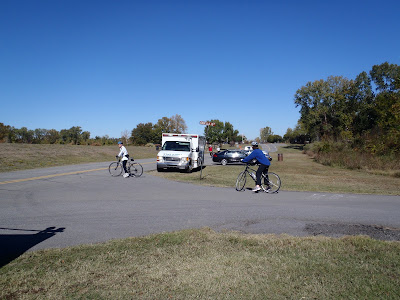 I rode up to Cook's landing to escort the ambulance in to the injured rider. With an ambulance on your wheel, even the most stubborn trail users move to the right.
As I descended the Little Rock side of the Big Dam Bridge, I noticed that Bill's Coneys had set up shop near the base of the bridge. I wrote a second-hand report on Bill last week and was determined to sample a Coney﻿ so that I could give you  first-hand information. 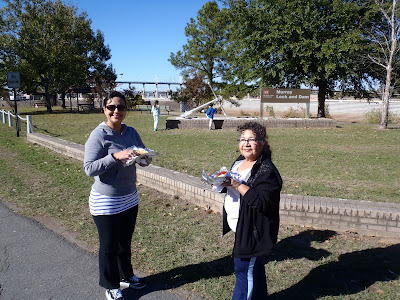 These ladies had just been served dogs as I approached Bill's stand. Some time later, the young lady came back to tell Bill that he had undercharged her. Unprompted honesty is refreshing. 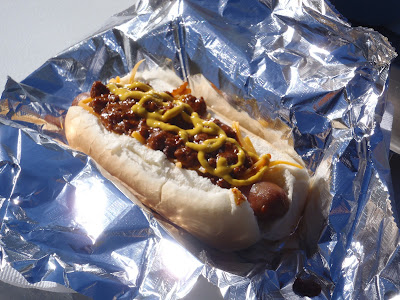 This chilidog had the look of good eating and possible indigestion. 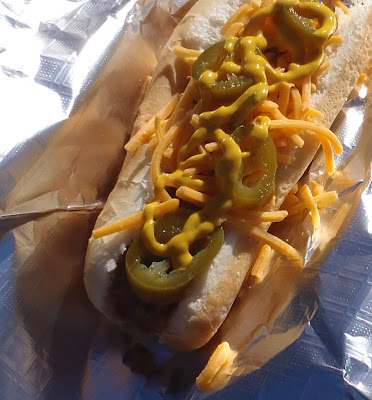 This is how I rolled! Not wanting to push the limits of my digestive constitution on the climb home, I passed on the chili and opted for the beefy Coney sauce, cheese, mustard and a pile of jalapenos. I rarely eat hot dogs, but this bad boy hit the spot! 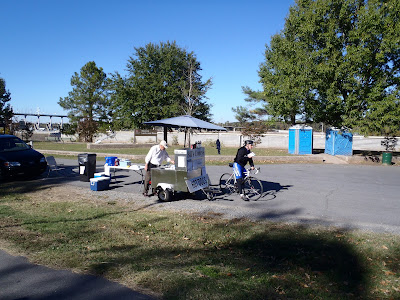 I wasn't the only cyclist to fuel up at Bill's. 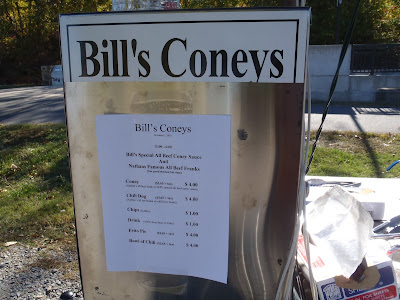 Bill's Menu
When Bill is not adding a little character to the River Trail,  he sets his stand up on weekdays across Markham Street from UAMS.
Considering that it was a beautiful day, the crowds were thin on Saturday, but I still ran into a number of friends out enjoying the many activities available along the river. Road riders, mountain bikers, runners, walkers and sunny-day bench-sitters were all smiling. And, why not?!
﻿
Posted by JBar at 11:51 AM