Changing Up The Mix, Exploring, and Enjoying The Night

With the change of season, we're all forced to change our riding routines, whatever they may be. In my case, that means hopping on my road bike 5-7 days per week. I have already starting to break out a little by adding some more mountain bike and a few days completely off the bike to the mix. Just this week, I laced up my running shoes for a couple of short runs. Understand that me and running are not the best of friends. I was always convinced that I just couldn't run, but after riding a few thousand miles, I decided to give it a shot a couple of years ago. My simple goal: run one mile.
I had never run a mile in a single stretch for any reason. I bought some shoes, worked up to the mile and in short order maxed out at 5 miles, then pretty much gave it up. I don't like running, but it's a great way to get a compact workout in virtually any kind of weather, so I'm seeking some kind of peace with the concept. It's unlikely to be love, but I'll settle a simple lack of malice between me and running.

On Sunday, I took the MTB down to Burns Park and poked around the various single-track opportunities off of the River Trail, starting with Pfiefer Loop and then the Yellow Trail over the covered bridge, then across to the Boy Scout trails. I had run into friends Heather and Mike and they said that some local adventure boys were working on some ramps out in the woods behind the gravel quarry. What they described was not the same structure I posted about a few days ago, but sho' 'nuff jump ramps. Of course, I had to go find them. I hit the trail across from the BMX track and rode up the hill until I saw freshly raked trail off to the left and then followed it downhill until I came to the ramps. 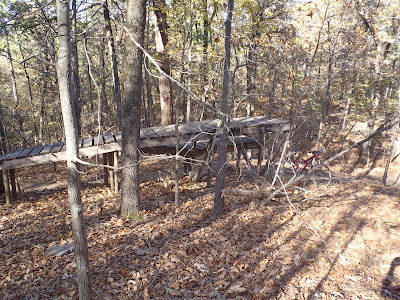 The guys working on the downhill ramps and raking the trail were gone before I came across the site. 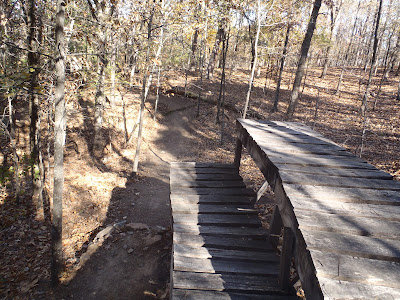 There is way more air under these ramps than I want, but I'll watch you do it. I'll even take your picture.
The structures obviously been there for awhile, but I've only heard mention of them and never knew where they were, nor have I heard much about who rides them. The trail leading into them is very cool, with a bunch of little jumps and bumps. Maybe we'll get a comment from somebody who knows the story on who built them and when.
Lights, action... 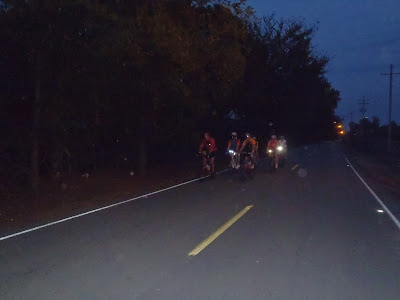 This is how many of us will be rolling on our weekday rides.
I've been riding with headlights this week, and the warm weather has made the transition to after-dark winter riding quite pleasant. A lot of folks seem to feel the same way, as there has been a lot of activity on the trail and the BDB. 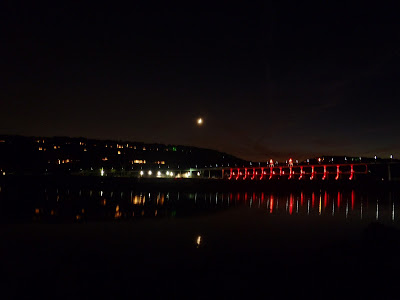 The scenary along the river is just as stunning at night as during the day. 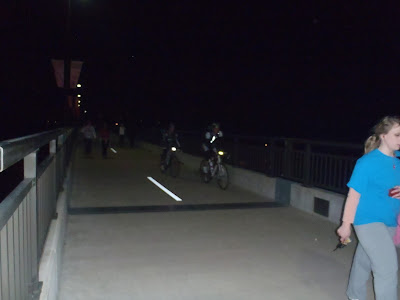 There was a steady stream of traffic on the BDB Monday night.
If I've got one complaint about night-time trail users, it's that many walkers and some runners wear no reflective clothing. I'm almost as afraid of running into one of them as I am of running into a skunk.
Posted by JBar at 9:17 PM

You're slowly becoming a great cycling voice on the LR cycling scene. Please keep it up. Kinda our own BikeSnobNYC for LR.

I met you when you stopped to ensure I had everything a few months ago when adjusting the front brake of my road bike on the top of River Mtn Road. That's a great example of the spirit of the LR cycling community.