One of my favorite blogs is Brendan Quirk's "What's New" which is found on the Competitive Cyclist site under Service Course. Brendan is a fine writer and offers a lot of insight into the bike industry, technical developments and sometimes a really tasty post like this one entitled, "At Night Add Gelato":
http://www.competitivecyclist.com/road-bikes/whats-new/at-night-add-gelato.362.html

The gelato got my attention. Our trip to Rome and Florence a few years ago was punctuated by multiple daily stops at the ever-present gelato outlets as I feel that the Italians do a superior job when it comes to rendering this delicacy, with ice cream being one of my many weaknesses. Instinct told me that if something goes well with gelato, it has to have value. Sneaky, manipulative devil that I am, I forwarded this link to Diane a while back in the hope that she would embrace the idea of the crostata in light of the fact that we had recently been enjoying a wealth of fresh fruit and free-range blackberries. Things worked out for me and she whipped up a blueberry crostata one Sunday evening. Many years ago, I planted a couple of blueberry bushes at the river house. At the time, I didn't really even like blueberries, but I've overcome that and we look forward to each year's crop. The local farm-grown blueberries came and went many weeks ago but ours seemed like a miss for the year. Berries would approach ripeness and then be gone. I assumed that they were being consumed as they ripened by the birds or by my Huck Finn-clone nephew, Jack, but a couple of weeks ago we were pleased to find a late bumper crop of ripe berries. Diane has picked a gallon each of the last couple of weekends, leaving her with a challenge as to how to use them. Lucky for me, she found that they fit nicely in a home made butter crust! 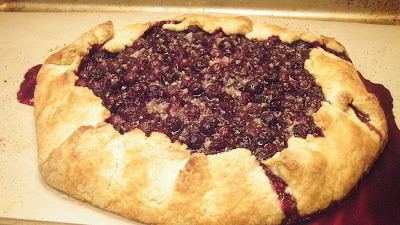 This is our second round of crostata. While we don't have gelato to complement this beauty, Edy's vanilla bean ice cream will do in a pinch!

Thank you Brendan and thank you, Diane. Call me double-lucky!
Posted by JBar at 7:33 PM

Glad to see you blogging again. I have a sudden urge for ice cream.

Talk about a demanding reader! I was off-line for less than a week. Oooooooooo,the pressure to produce!