The OTHER MS Bike Riders 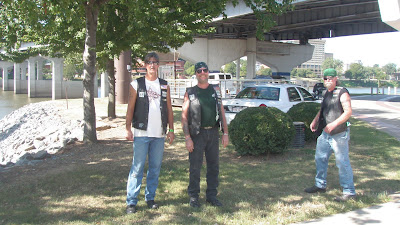 Well, my plea for donations for the MS150 apparently didn't strike much of a nerve and I think that I may know why! I was coming in on the heels of another MS Society group ride whose participants were far more, how shall I say this, "persuasive looking", than a guy in spandex and pink.
Central Arkansas motorcyclists held "Poker Runs" around the area for the MS cause. I caught up with these guys at Riverfront Park in Argenta. 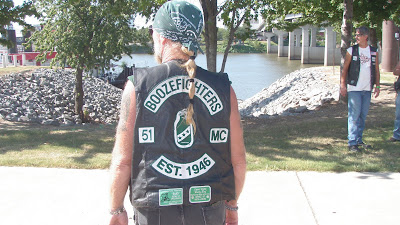 I got the story on the Boozefighters a few years back at a gathering on the Mulberry River. The club was founded by soldiers returning from WW II with a taste for booze and a need for some excitement. I asked them if they were anti-booze or if they just liked to get liquored up and fight! I'll just say, these guys mostly just like to party!
http://www.bfmcnatl.com/hist.htm
If you're feeling like a rebel, don't forget that you can still "put it to the man" by donating to MSS!
If you're a left-leaning liberal, you can give to this worthy cause.
If you're a Tea Party supporter, what better way to avoid the responsibility of paying taxes? Sock it to Obama by giving to ME!
If you're a Glenn Beck fan and hang on his every word, you can......
Never mind. I'll write the check if I have to count on Glenn Beck! I can only take this so far!
http://main.nationalmssociety.org/site/TR?px=2178187&pg=personal&fr_id=12750&et=OM8aUN_ZWMlHsYlQ56kEgQ..&s_tafId=136815
Posted by JBar at 5:10 PM