They're Back: Smash-And-Grab Dirtbags

While on a ride with a friend Monday afternoon, we noticed a Little Rock Police patrol car in the parking lot just east of the foot of the BDB. Two young women in workout clothes were speaking to the officer and our immediate assumption was that they had been victims of a car break-in, as such crimes have been common in the past. We were, unfortunately, correct. My friend, Karen, said few cars had been in the lot when she parked around 5:00PM, though by the time of our observation at around 7:00 the parking lot was completely full and all roadside parking in the area was also full. This parking lot is probably the most populated area along the trail, especially at this time of day. There were folks enjoying the benches nearby and a steady stream of riders, runners, and walkers while quite a few cars cruised through looking for parking. So how do these low-life bastards manage to smash two car windows in vehicles parked several spaces apart, grab the readily visible contents and then flee without being noticed? From what I gathered, the girls had arrived at about the same time to meet for a walk. Since their cars were not parked together but both were broken into, I would guess that the scumbags watched them arrive and hit the cars soon after they left the parking area. Never having smashed out a car window, I'm not sure how much noise it makes, but I'd think people in the area would notice. 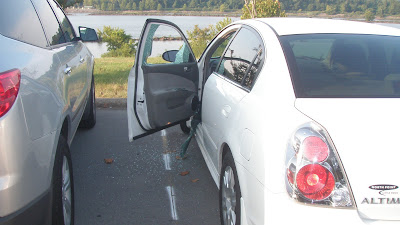 It sucks to come back to your car to find this after enjoying your workout. 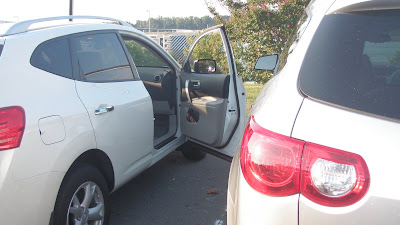 Both cars were parked next to SUV's, though I'm not sure if the SUV's were there at the time of the break-ins. If another car pulled up behind, the thieves would have had a fair amount of cover from passers by. 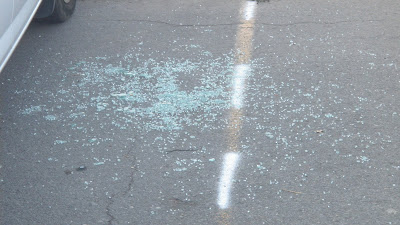 This puddle of glass a few yards away indicates that the break-ins were not an isolated incident.
Folks, this has been an ongoing problem, particularly on the Little Rock side of the bridge and especially in the now-closed area near the round-about, though I haven't heard of many such events this summer. As a community, all that I know for us to do is to be observant, call the cops if you notice anything out of place and don't leave any valuables in plain sight. We can't assume that these guys are stereotypical thugs. I was told last year that a thief was caught after breaking into a car near River Mountain. He had a bike on a bumper rack and was milling around looking like he belonged until he had a moment alone, at which time he pulled the smash-and-grab.

I think the mentality of these guys is that:
1. They're unlikely to get caught.
2. They're likely habitual criminals who do this stuff all the time, so what's another conviction? In some circles, there's not much of a stigma to being thieving low-life.
3. If caught and convicted, they'll be right back on the street because there is no room in jail for petty thieves.

About all that we can do is hide our stuff where it can't be seen and easily grabbed. If my car is broken into, I at least want them to have to grub around to find anything of value. It may be the closest thing to work these guys do.
Let's watch out for each other.
Posted by JBar at 6:40 PM

I hear even if the police catch them in the act they only write a ticket. This was told to a BACA meeting last winter.