Along The Trail: Odds and Ends 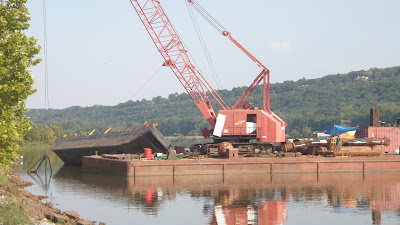 "Skeeter, are you sure you put the plug in?"
Whoops! Late last week, I noticed a barge loaded with rip-rap moored near the pavilion at the NLR foot of the BDB. Sometime over the weekend, the barge started sinking, allowing its load of rock to shift and spill. While I was stopped to take the photo above, I struck up a conversation with a guy who was also taking a few shots. He said that he knew somebody who worked on the crew and that another crew member was supposed to have come down Saturday morning to check all of the hatches and be sure that everything was secure. I'm unsure of said crew member's job status, but salvage operations are still underway. 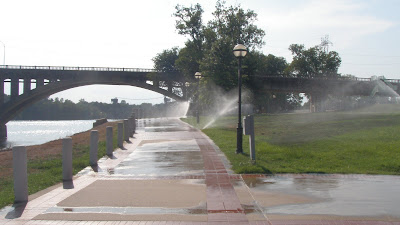 The mist blowing from the sprinklers felt pretty good on this hot afternoon, but the tile brick in North Little Rock's Riverfront Park is treacherously slick when wet. I've proven this a couple of times, most recently with long skid that ended with a feet down Flintstones stop. My buddy was not so fortunate. I won't name the crash victim because I don't want to embarrass my friend Bill Steward.
Posted by JBar at 4:16 PM

Email ThisBlogThis!Share to TwitterShare to FacebookShare to Pinterest
Labels: barge

I watched you take a dive there about this time last year? and that was before the trip to the pub

I try not to use real names when the goober is ME. We need to have Wednesday pub ride soon, by the way!