Along The Trail: Little Rock Steps Up

Credit where credit is due.
I will confess to having been somewhat negative of attitude toward the City of Little Rock when it comes to the city's commitment to bike infrastructure.  Little Rock's inability to get resolution on a route for the trail gap from downtown to Junior Deputy Park is the most glaring issue, but small things like the sweeping of the heavily used bike lanes along Rebsamen Park Road also provide fodder for criticism. In comparison, North Little Rock sweeps the trail several times per week, repairs pot holes promptly, and has added many features to make the trails more safe and accommodating for cyclists and other users. Pulaski County is engaged in the construction of the Two Rivers Bridge and taking advantage of construction along County Farm and Pinnacle Valley Roads to add bike lanes. Well, in the interest of fairness, I must give Little Rock credit. Here ya' go. This patch of asphalt will allow riders to avoid the congestion at the foot of the bridge. 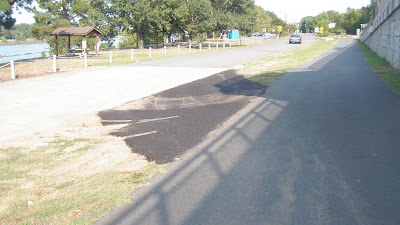 You have to cross some rumble strips to the road, but riders can more easily bypass the often-crowded area at the foot of the bridge. Initially only a few feet wide, a second pass of the asphalt truck was made to widen the cross-over to its present magnificence.
Need some time alone?

If you ever get to thinking that things are just too hectic with the weekend crowds along the River Trail and on the BDB, I suggest that you take a little spin on a hot Friday or Sunday afternoon. You'll have all the solitude you might want! 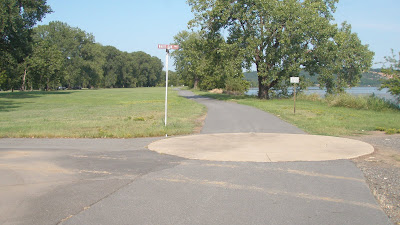 The geese had even abandoned the trail in favor of the shade or the water on Sunday afternoon as the temperature hovered around 102. 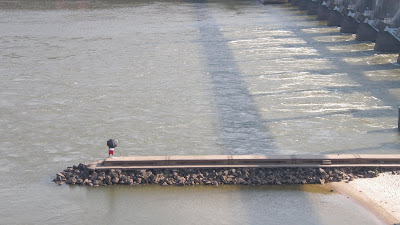 This solitary fisherman had the foresight to bring his own source of shade. 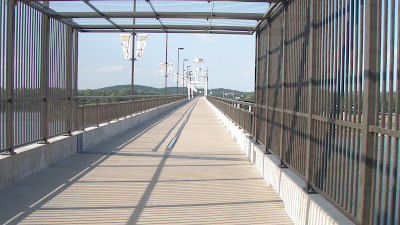 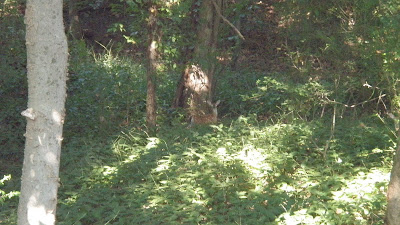 I spotted a doe and her two fawns near the FOP. They were remarkably comfortable with my presence while I circled on the bike. The fawns moved for cover when I stopped. One of the fawns is in the center of the photo. The doe's head can just be seen as she peeks around a tree on the right margin of the photo.
Posted by JBar at 7:52 AM