The BikeRumor Schwag Ride had a couple of things going against it. Monday night. Short notice. Recent impressive heat and humidity. But it also had the benefit of Little Rock's vibrant and connected bike community, a posting here, a nice write-up by Celia Storey in the Dem-Gaz, and the a very welcome break in the heat. Oh, yeah, and they were giving away a bunch of free stuff and letting folks ride Orbea bicycles. At ride time, the temperature was mid-nineties and the humidity was downright bearable. The place was vehicles and riders. Eighty-one riders signed waivers and the roll out looked like a charity ride. It was really impressive that word got out and that so many smiling people showed up. It was the first event of its kind for Bike Rumor and I think the folks doing the organizing were blown away by the response. Much credit goes to Orbea and Steve Shepherd for getting the word out and to the local bike shops that helped provide the schwag*, including Competitive Cyclist and Arkansas Cycling and Fitness. 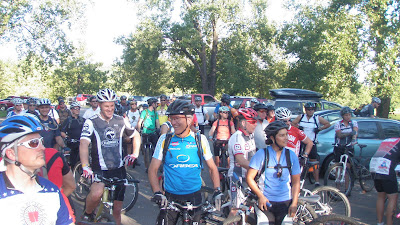 The fat tires were out in force on Monday night. 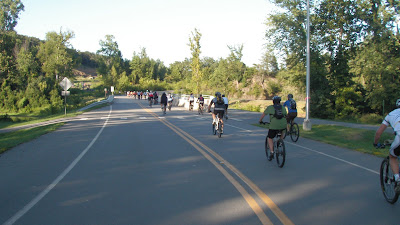 Eighty-one riders signed in. The roll-out stretched from the parking lot and out of sight through the quarry. 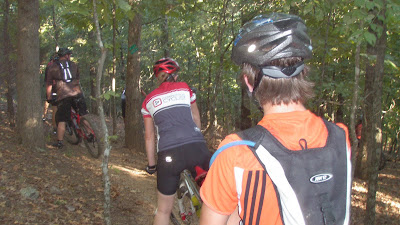 There were a few bottlenecks on the single-track, but back where I was, nobody was in much of a hurry. 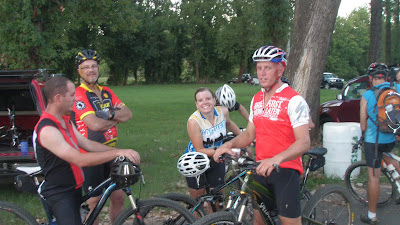 Waiting for the free stuff! Everybody was a winner with every name registered being drawn for a prize. 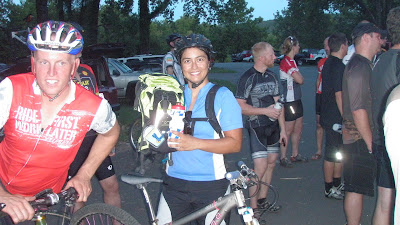 Some prizes, like this CamelBak, were a step up from the usual water bottles and tee shirts. Not that there's anything wrong with water bottles and tee shirts, as there were many given away, along with tires, helmets and other cool stuff.
In Celia Storey's column in the Democrat-Gazette on Monday, Celia kindly mentioned JBar Cycling. Thanks for the call-out! A couple of folks even admitted to reading it after the validation in mainstream media!
*Celia also tickled me by noting that "schwag" is not a word in standard usage that means "free stuff".  "Swag" gets mention. I was a bit puzzled when I first started hearing "schwag" and hesitated to use it, not being comfortable using words for which I don't have a good grip on meaning. But then it seemed that whenever I heard it, somebody gave me free stuff, so I soon got the hang of it.
Single-Track Re-Entry
Until Monday, I hadn't been on my mountain bike for a couple of months and I could tell! It really is a slightly different kind of fitness from the road and the differing bike geometry requires a little adaptation. That means I really need to get on the mountain bike more often, but it's hard for me to get into when it's hot. Fall is closing in, so I'll look forward to some cooler days in the woods. I had one momentary lapse in attention, resulting in my clipping a tree and being unceremoniously thrown to the ground. About the only good thing about it was that the spot was too rocky for poison ivy to grow.
Posted by JBar at 10:31 PM