It's Been A Tough Few Days On The River Trail 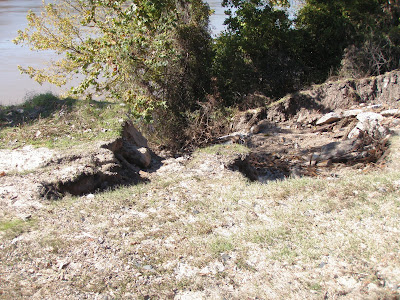 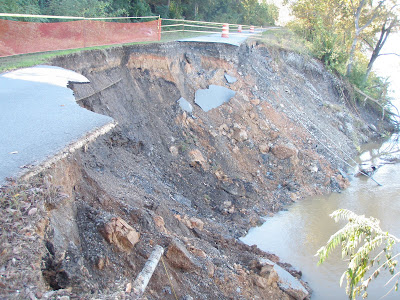 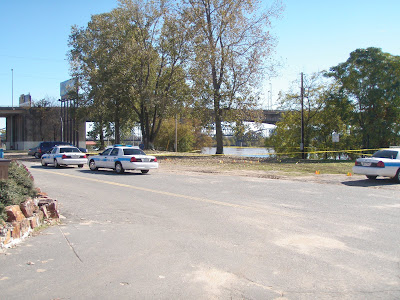 I've been off in the hills boating again, but got back in time to get on the bike for a few hours on Sunday.

The signs of the recent flooding rains were evident in the rocks, sand and gravel washed across the trail in numerous locations and serious riverbank erosion in a couple. In North Little Rock, a large section of bank washed out, apparently from water draining from the quarry. I'll bet the waterfalls from the bluff were impressive Thursday night when we got 3" of rain in the hour between 8:30 and 9:30! The trail is intact, but the area will need some attention.

In Little Rock, a section of the Medical Mile; aka "Trail to Nowhere", collapsed into the river. The trail dead ends a few hundred feet upstream at the UP rails, so we're not missing much. The area is gated off to protect a temporary Verizon optic cable. The original cable was in a conduit that was sheared off as the trail slid into the river.

Not so natural calamity:

We rode up to River Trail Rentals, now "River Trail Station", to find a large contingent of NLR's finest on the scene and in the act of investigating a shooting. David, the proprietor, said that he was told there had been a shooting at about 7:00AM in the grass parking area across from his shop.
I've always felt very safe down there and still do, but hope that this doesn't represent a trend. I'm not a fan of surveillance cameras in public places, but as NLR looks at expanding their existing downtown network, the park and parking area should be a likely location.

Erosion of riverbanks and civil order aside, it was a beautiful day to be out on the bike!
Posted by JBar at 7:39 PM

Thanks for the pics!