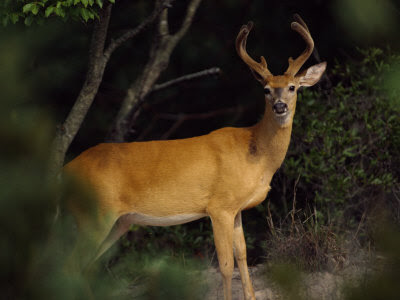 At this time of year 300,000 heavily armed Arkies head out of town to do battle with the wily white-tail deer. ATV's are gassed up, Bud Light is selling like hot cakes at a church breakfast, stands are erected, feed plots have been planted, trails are scouted and, finally, guns are loaded for the offensive. For the rural deer, it is a time of escape and evasion, hide and run, live or die, but even with the massive army on their trail, the deer population is huge and I think they're getting organized.

My imagination or a frightening new reality???

Could it be that while the rural deer are laying low or running for their lives, the herd inside the city limits is on the move, taking retribution for the carnage being visited upon their country cousins? A few weeks a go, a local rider was blindsided by a deer as he zipped along 3rd or 4th in a paceline in the Hooper's Crossing/ North Shore Trail area. The rider suffered a shoulder injury and according to a buddy who was on the ride, "He was out like a light. He never saw the deer. I thought he was dead." When I heard about this incident, I wrote it off as an accident, just a unfortunate crossing of paths. Then, last week, while on a trail tour, another deer attack occurred when a large deer ran directly into the path of a young lady riding near the same area. The rider was taken to the surgical hospital with a likely broken wrist and ribs. Coincidence? Another "accident"? Unlikely, I say.
While I know there are many deer along the River Trail, and in particular the new North Shore Trail crosses the regular path of the deer herds seen each evening in the fields to the East; however, these deer are usually cautious and do their best to avoid trouble. What could be causing these once passive creatures to attack? I think they are fighting mad and they have sensed our vulnerability while on the bike.
As I considered defensive measures that could be taken by cyclists, I looked to the Deer Whistle, which produces subsonic tones that cause deer to freeze in their tracks; however, the Deer Whistle requires speeds of 35 MPH to be effective. That might protect the average rider descending River Mountain Road but is unlikely to help many of us out on the flats. Pending further research, it looks like we'll just have to depend on a sharp eye, good luck and the mercy of the marauding bands of white-tails.
Posted by JBar at 9:25 PM

The deer are growing in numbers quickly in the park. I counted a group of 15 during an early thanksgiving day ride.