The Central Arkansas cycling community lost a good friend  with the passing of Brock Johnson. Brock was the President and CEO of Garver, LLC, where my wife Diane is a long-time associate,  and was an avid cyclist who led Garver in supporting many local cycling events such as the Tour de Rock. When Garver made the move to NLR's NorthShore Business Park, the building design included fitness facilities, bike storage and a bike shop for the use of the employees, many of whom enjoy rides on the nearby River Trail. I can't do Brock justice here, but I will say that he was a visionary, a leader, a friend, and he always made me feel like I was a full-fledged member of Team Garver. 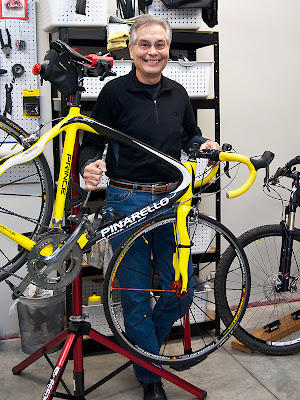 Brock Johnson in the Garver bike workshop and storage facility.

"Our company has lost a talented and visionary leader who served as an inspiration to everyone around him, and we are deeply saddened by his death," said Garver President Dan Williams. "Brock was a respected leader who helped guide Garver through a period of historic growth. Brock also was a great friend and mentor to many, and we miss him dearly. Our thoughts and prayers are with his family during this very difficult time."

Johnson served as president and CEO from 2003 to 2012. Earlier this month, Johnson presented a resolution to Garver’s board of directors appointing Dan Williams as president, chief operating officer, and chairman of the board.

"Our company has lost a man who led Garver through transformational growth during one of the most difficult economic times in our industry," said Chad Clinehens, Senior Vice President and Chief Strategy Officer. “Brock outlined an ambitious growth plan to double the size of our company over the past five years. Despite the challenging economic conditions, Brock succeeded with flying colors. Brock was loved and respected by his employees, and he will be greatly missed.”

Johnson spent 40 years with Garver. During his leadership, he helped define and expand Garver’s brand and service into new markets, taking the company from six offices in four states to 12 offices in seven states. His direction led to Garver becoming the first engineering company in Arkansas to build a LEED-certified corporate headquarters – Garver’s offices in North Little Rock.

As an avid pilot, Johnson was instrumental in developing the company’s aviation business line, growing it into one of the largest business units in the company and providing services from Oklahoma to Tennessee; his engineering achievements began with much of the infrastructure at Bill and Hillary Clinton National Airport in Little Rock.

Johnson was a cycling advocate, and he used his passion to transform Garver’s business culture into one that actively supports healthy living. In addition to helping Garver become the first and highest ranking Arkansas engineering firm to earn bicycle-friendly business recognition, his leadership structure contributed to saving Garver millions of dollars in health care costs.

Johnson is survived by his wife Paula; and his three children, Katie, Taylor and Sloan.

In lieu of flowers, the Johnson family asks that memorials be made to Bicycle Advocacy of Central Arkansas: www.bicycleadvocacy.com.