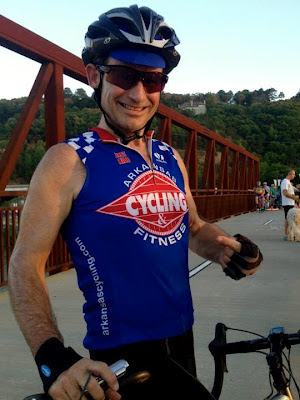 My Arkansas Cycling and Fitness jersey got me thrown into the talent pool at a recent Parks and Tourism photo and video shoot on Two Rivers Bridge. photo by Addie

As I dragged my somewhat shattered ego back from a shelling on the Tuesday night Major Taylor  ride,
I came across Addie Teo and a crew from ACF on Two Rivers Bridge taking part in a shoot for Arkansas Parks and Tourism. Diane and I took part in a similar production a few years ago and found our pictures appearing in Bicycle Magazine, on-line ads, and in various tourism guides. Ad....drum roll....we got a talent fee! I was not invited to take part in this event and Addie and her crew certainly had all of the talent they needed so I was just hanging out. As I lurked to the side taking photos of the action from astride mt bike, the woman directing the show, mistaking me for part of the team, grabbed my arm and gave me a shove while yelling "go! go!go!" so, I went! When she realized what had happened, she apologized and told me get back out there. Not being publicity shy, I accepted and spent the next 45 minutes rolling back and forth across the bridge as the cameras rolled and shutters snapped. 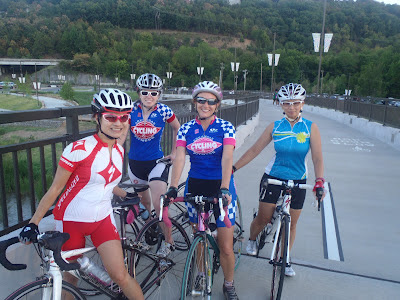 It is obvious that the jersey is the only thing that might have associated me with this attractive bunch. 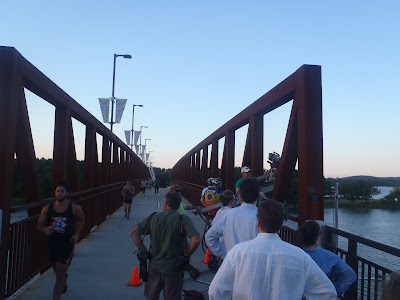 This was my position before I was flung into the scene, narrowly avoiding a collision with one of the starlets above. 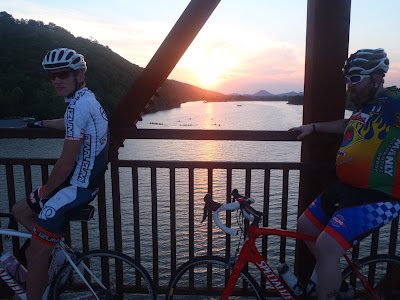 Brian and Adam made up the rest of the official cycling models. Thanks, guys, for letting me share the frame! 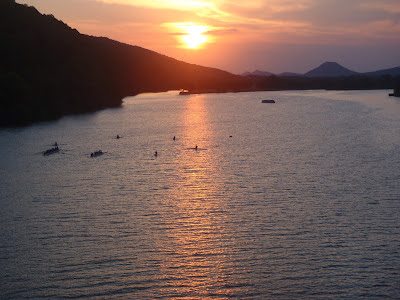 The Arkansas Boathouse Club had their crews out in force, with the sunset view of Pinnacle Mountain making for a spectacular background.

My experience just goes to show that you just never know what you might find down along the river! I sometimes wonder how I'm going to keep coming up with topics for posts, but just as frequently I find that I don't have the time to share the many interesting things that I encounter. This was fun and I appreciate that I was invited to participate rather than being run off as in interloping scoundrel!
Posted by JBar at 10:18 PM

That's pretty cool! I like the looks of that lady biker gang.

Sometimes wearing an ACF jersey pays off! :-) Good to see you out there! BTW, that good looking guy with Adam was Brian, not Chris. :-)

That's why I don't often list names in group shots! I'm not that great with names and I'm usually too sleepy to do much research by the time I get around to writing. Brian is back to being himself in the photo.