Back Along The River Trail and the MS Rock'n Hot Ride

During my month-long "time out" from the bike, I really missed seeing my many trail friends and keeping up with the developments and changes along the trail itself. It is kind of like when you run into a seldom-seen acquaintance and think, "man, he's put on a few pounds and showing his age", only to realize that you haven't seen him 10 years and therefore your mental image hasn't been updated in a while. The changes along the trail are not quite so radical, but over the course of my first week bike on the bike I did get to be present for the opening of the west ramp of the BDB, which is the biggest change.

I also noticed that the geese are returning to the NLR trail in numbers. I know that ranger Kate Finefield and some volunteers have tried to keep them moving and worked addling eggs, but I counted around 45 on the soccer fields Saturday morning and a few spots of concentrated poop are again appearing along the trail.  Things are much better than pre-goose-dog days of a year ago, but without aggressive deterrents, we'll almost certainly be right back where we started within a year or two.
A smaller change is the placement of mile markers as park of the 88 mile Arkansas River Trail System. Uniform signage is a small part of that initiative. 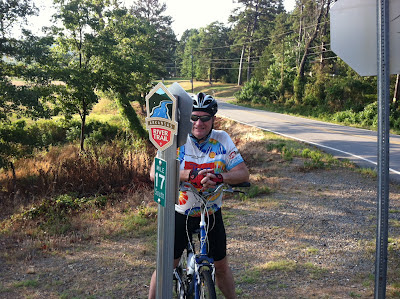 Dumas Garrett at Mile 17 of the Arkansas River Trail System. Dumas and friend Tom Jones showed up to escort me on my Saturday ride on an old mountain bike and a hybrid, respectively. Tom claimed his road bike was still boxed from a late flight back from Colorado but I accused them of adding insult to my injury as they humored me on my return to the bike.

Many of the hot afternoons have seen the the trail system virtually abandoned of late, though in the last week the promise of highs in the 90's seem to have drawn folks back out. I'm delighted to see folks out and about and on Tuesday I decided to fall in with the Major Taylor group on their regular group ride. It was a bit of a tactical error of optimism on my part. Though I managed to ride 150 miles in my first week back on the bike, the mileage was not a substitute for fitness and I was dropped gasping on the first hill we encountered on Pinnacle Valley Road.

The big fall rides will soon be upon us and it's time to start making plans. The first ride on my list is this year's MS150 Rock'n Hot Ride , which will be an overnighter to Hot Springs. It requires some fund-raising or check writing, but the MS150 rides at Petit Jean were among my favorites and this new route intrigues me. On Saturday, we'll ride to Hot Springs, grab our overnight bags from the provided transport and check into a hotel, have a soak and some dinner, then dump our stuff for transportation and ride back on Sunday. It's a great cause and the MS rides always have less of a "race" feel than the BDB100 and Tour de Rock. It's a great chance to just enjoy the ride while building toward a fast Big Dam Bridge 100.