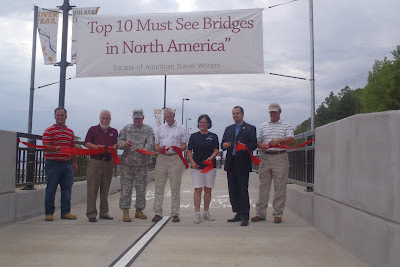 The dignitaries were lined up on August 1 to cut the ribbon to the new west ramp on the Big Dam Bridge.


Wednesday, August 1, marked the completion of yet another major project along the Arkansas river Trail as the southwest approach was officially opened to traffic.Considering that the event was held at 9:00AM on a hot, drizzly and sultry Wednesday morning, there was a good turnout and the cycling community was front-and-center. 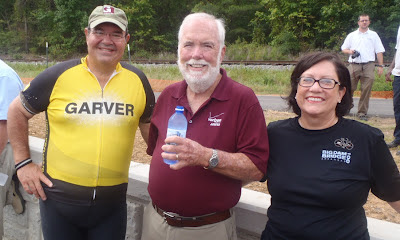 Bert Parker of Garver, LLC, the engineering firm for the project, is all smiles, along with Judge Villines and Susan Cooper of the Big Dam Bridge Foundation 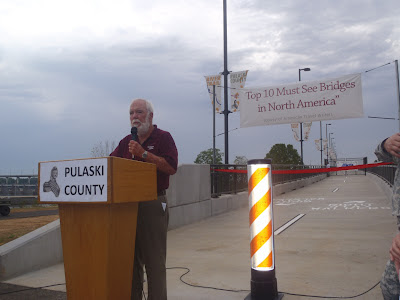 The Judge knows how to get things done and that includes speeches.  Buddy keeps it short, makes his point, and gets down to business. He noted the importance of the BDB and trail system, remarked on the designation of the BDB as a "Top 10 Must See Bridge" by the Society of American Travel Writers, and allowed his counterpart from the Corps of Engineers a few words before wielding the scissors and stepping out of the way! 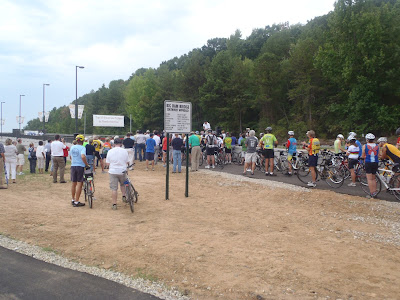 Folks were ready to try out the new ramp and Judge Villines didn't waste much time in letting us get to it! 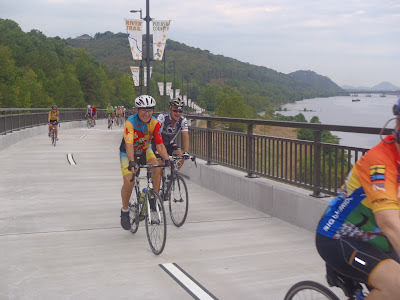 The community was well-represented by cyclists from Team Garver, ABC, BACA, Mellow Velos, AHTD, NLR Parks Department, and many riders just coming out to show their support and be among the first up the ramp. 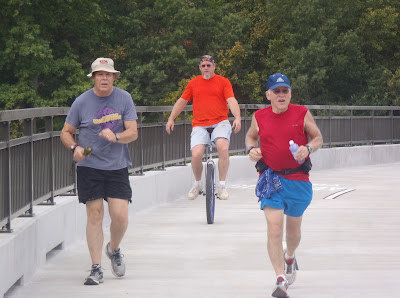 The traffic was not limited to bicycles. 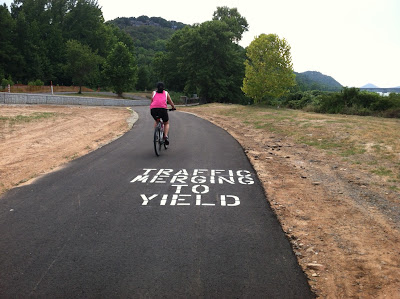 We will all nee to learn some new traffic patterns.

While the new ramp will help divert some traffic away from the frequently congested area at the base of the east ramp, we all need to be alert to the new traffic patterns. As I rode home Wednesday, a runner coming up the old ramp cut the corner as he made a left turn to go down the new ramp. He was head-down and huffing as he stepped directly into my path. I was watching him and nearly stopped, but he was startled as my front wheel came into his field of vision.

Many of you may be aware that the Pinnacle Valley Road bridge over Little Maumelle Creek is currently closed for maintenance. The signs indicate the the bridge will be closed until the end of August, but county officials say the contractors should be finished by next week.