Settle down, all of you middle school English teachers; I'm not going to get busted that easily. In this case, "Spokes" is singular. Spokes is the name of the new bike shop that is taking shape behind the papered windows of the former Orbea store in Little Rock. I recently had the opportunity to meet with the owners and see the newly expanded space, which is still a very busy work-in-progress. 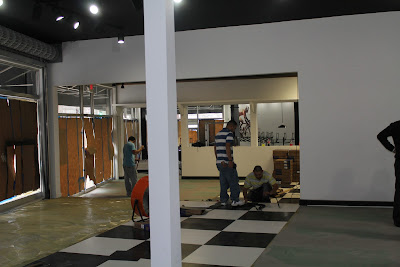 New flooring is going down in what will be a very attractive retail space at Spokes. The plan is for an open feel to allow customers an uncluttered view of the displayed merchandise.
Mat and Regina Seelinger had no idea a few months ago that they'd be opening a bike shop, their background being the restaurant business. Mat was approached by his friend Tony Karklins of Orbea about helping with the coffee bar that was to have been part of the planned, now canned, Orbea lifestyle store in the River Market District. One thing led to another as Mat and Tony exchanged ideas. Mat wasn't really interested in the coffee bar on its own, but he became intrigued with the idea of the bike shop, embracing many of the concepts that were in line for the Orbea store while adding ideas that he felt would help complete the package. They started the conversation in mid-October and by November 5, the deal was done. Mat would lease the entire building that had housed the Orbea store and The Station grocery at Stifft Station (Markham and Kavanaugh) and Orbea would have a full-line dealer in town that would also provide them a resource by which they could show the line in a retail setting to dealers and prospective customers visiting Orbea USA's North Little Rock headquarters. 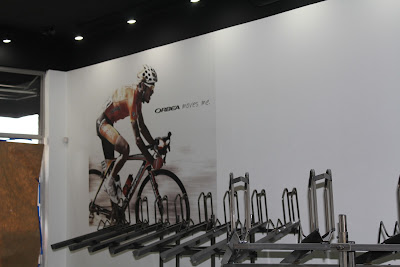 The Orbea bike brand with have a prominent place at Spokes, but is one of four to be offered. The Felt, Niner, and Electra brands will fill out the store's bike lines.
Things have come together quickly, and Mat and Regina have made a great deal of progress in terms of selecting product﻿ lines and putting together their team. The store manager will be Scott Burke, who also managed the Orbea store, so, in addition to already knowing his way to work, he is very familiar with the Orbea product and the retail environment. Scott will be joined by James Bonner, who brings experience in sports physiology and training from his position at the North Little Rock Athletic Club. Many local riders will be glad to know that Kevin Baltz, lately of Chainwheel, will be turning wrenches at the new store. He will be doing so under the watchful eyes of patrons at the adjacent coffee bar. The Seelingers said that they heard over and over that "the coffee had better be good."  Tony had already done his research on the subject and directed them to Doma Coffee, which looks like a great fit both for their coffee and their association with a cycling lifestyle. Not wanting to disappoint their clientele, Mat and Regina traveled to the Doma mother ship in Idaho for barista school, an indication of their commitment to delivering a quality product. A good sign. 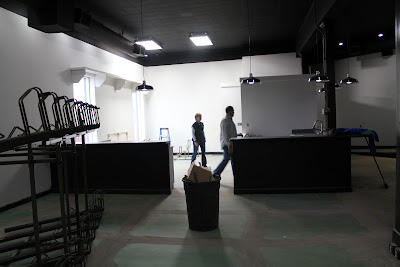 The service area will enjoy plenty of natural light. The coffee bar at the right will have stools so service customers can watch the mechanics in action. There will also be couches and chairs for more relaxed seating. 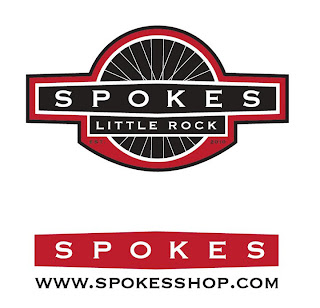 Very nicely done logo! The website is not up, yet.
Spokes will employ the ReTul bike fit system and will feature the Louis Garneau clothing line. In a bit of a departure from the strategy of many shops, Mat said that the current plan is to limit the number of clothing brands, but to offer a lot of selection and depth within the brand. LG seems to have the concept covered with a very broad line of clothing and accessories. 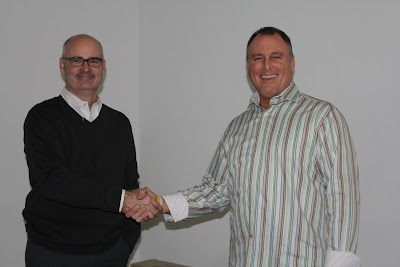 Mat Seelinger (r) and his first customer!
The store actually made its first sale as I was visiting with Mat and Regina. A gentleman came in to pick up an Electra child's bike in a lovely pink. When they completed their dealer information for Electra, Regina had listed Mat's cell phone number because phones had yet to be installed at the store. A shopper had found the perfect bike for her granddaughter on Electra's website and contacted the number for Spokes from the website dealer list. When Mat's phone rang and the lady said, "Is this Spokes?", they thought it was a smart-aleck friend playing a joke, but they caught on soon enough to help their first customer. They just happened to have received the sought-after model in the correct color, so the deal was on!
While the Little Rock market has more than its fair share of very good local bike shops, the market is growing and hopefully there is room for a new player with a slightly different feel in terms of in-store amenities. The location, in a neighborhood teeming with cyclists, should be an asset.
I'll be checking back with the Seelingers, but at this time the Grand Opening is scheduled for January 8. When that schedule is firm, I'll bring you an update with details of the planned activities.
Here's a link to the Spokes Facebook page:
http://www.facebook.com/pages/Spokes-Little-Rock/109216635818850#!/pages/Spokes-Little-Rock/109216635818850
Posted by JBar at 10:39 AM

Kevin is back! I know where I will nw getting my bike serviced!