Fall is officially upon us and with its arrival come changes in our riding routines, some subtle and some not so. The dramatic drop in temperatures over the weekend here in Arkansas was one of the less subtle changes, as daily highs went from high nineties to low seventies. A slightly more subtle change involves the seasonal positioning of the sun and the resulting effect on visibility for both riders and drivers. With the winter sun low in the southern sky, it shines at a much lower angle than in summer, and with the shorter days, we are more likely to be riding at dawn and dusk, which also puts us on the road at peak traffic times. It becomes especially difficult for drivers to see riders, so if you're riding with the sun in your eyes, be conscious of the fact that drivers approaching from behind probably can't see you. 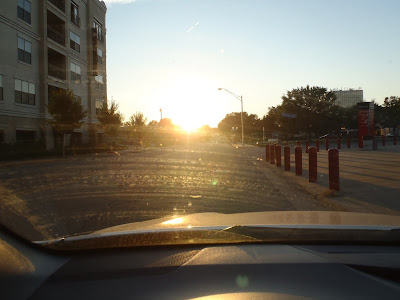 This kind of visibility is the norm on a fall evening. Drivers tend to focus on center lines or a car in front of them, making it easy to miss seeing cyclists. Ride like you're invisible, because it's likely that you are.
P.S. That does not mean that you have superpowers.

We'll be pulling out the arm warmers, tights and long fingered gloves soon enough, but for now, let's just enjoy the perfect weather. It's a great time to be riding, but be careful out there on the road.
Posted by JBar at 9:11 PM

ok, your PS cracked me up.