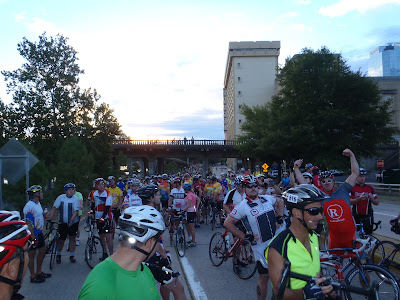 Seeing a couple of thousand riders stretched as far as the eye could see on LaHarpe Blvd. was very cool. This is Little Rock! Pay no attention to the goober in the Radio Shack kit flexing his muscles along with his posing friend.
The BDB100, Central Arkansas's premier cycling event, went off Saturday morning without a hitch. Rain had popped into forecast earlier in the week, but by ride time, the little front had already passed through leaving behind partly cloudy skies and temperatures that didn't leave the 70's. The northeast wind was a little bit of a header through parts of the course, but was a welcome tailwind for most of the last 30 miles of the century route. 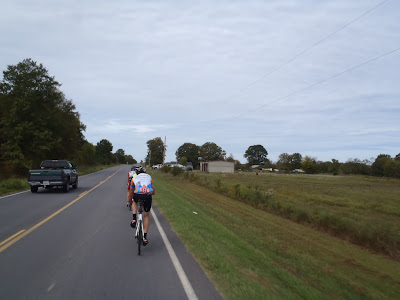 The route started in downtown Little Rock, crossed the Big Dam Bridge and headed north for a loop around Lake Conway in mostly rural Faulkner County.
The route is a good one, with enough climbing that it clearly avoids the "flat" label and there is plenty to sting late-ride legs, but there's nothing to cause too much suffering unless you're at the limit, anyway. According to a rider's Garmin, the route had 2559 feet of climbing. We rode the first three BDB's, but after having missed it last year, I'm was impressed at how well things went, from registration to the rinse-off tents at the finish. The route out of town has been refined to better handle the growing number of riders. I hooked up with a reasonable bunch for this ride, and we finished at just under five hours. A pack of the local seriously fast boys went out shooting for 4 hours and were the first in at 3:55. 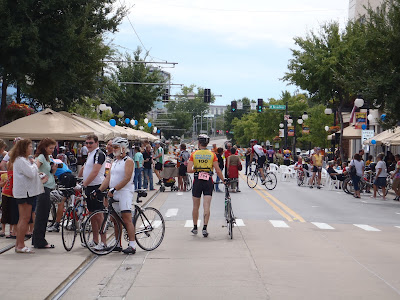 The finish area was roomy and Argenta had provided rinse-off and change tents. The streets were closed to traffic and it became an entertainment district so that the local watering holes were able to freely sell beer for outdoor consumption. Business appeared to be brisk as many riders stuck around and non-riding families and friends enjoyed the live music on a perfect day. 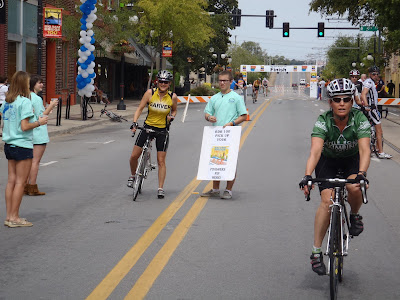 ﻿Diane snags her finishers pin as she and friend Sherri finish up their 68 mile cruise. 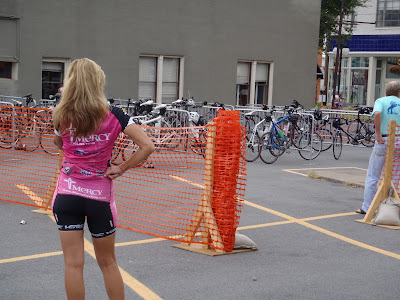 The bike check area still had a lot of takers when we left. In addition, many of the street racks were full, restaurants offered indoor bike parking and there were bikes leaned about anywhere that would serve. 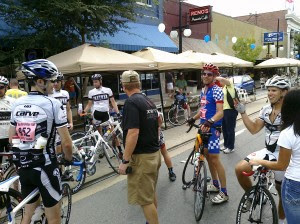 This is the 3:55 pack at the finish. That was some seriously good riding! No wonder these guys regularly drop me on group rides.  Photo poached by permission from Bryan Shipman's blog at:
http://arkansascycling.com/blog/?p=255
This is the fifth year of the BDB100 and it seems to be maturing nicely. Aid Stations were frequent and well-stocked and the traffic control was good where needed. There was a traffic backup on Maumelle Boulevard as drivers were forced to wait for the many small groups of riders to pass, but most folks seemed patient enough and the police did a fine job of protecting the riders. The BDB ride is a great cycling showcase for all of central Arkansas and seems to have staying power after five successful years. I'm looking forward to the continued growth of the event.
Posted by JBar at 7:36 AM

it was a great day to ride. Enjoyed riding with you part of the way. I liked the route this year a lot. Those 3:55 guys are incredible.