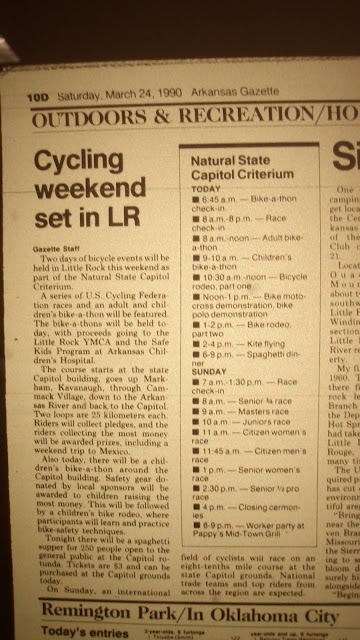 Little Rock is becoming a bike town. We owe much of that to a nucleus of folks who have supported and helped grow the sport over the years. This is the first in a series of articles about the Central Arkansas bike scene which will focus on the teams and some of the notable events of the past.

In the spring of 1990, Greg LeMond was the reigning Tour de France champion and the USA was actually kind of interested in road bike racing. About 500 people turned out on a cold March 25th morning to watch the 1990 Natural State Capitol Criterium, which was won by Wisconsin's Tom Schuler of the powerful 7-Eleven professional team. Schuler was the 1987 USPRO national road champion and the 1981 US Pro criterium champion and, more recently, the director of Team Type 1. The 1990 event, held on the State Capitol grounds, naturally, had the 62 riders in the senior 1/2 division, 28 of whom finished. According to the Gazette, "One of the most promising young racers in the country traveled from Plano, Texas, to compete". Eighteen year-old Lance Armstrong , racing for Team Montgomery, came in 13th* and collected $110.00 for his efforts. After the event, he commented on the tough race, the good organization, and the high level of competition. 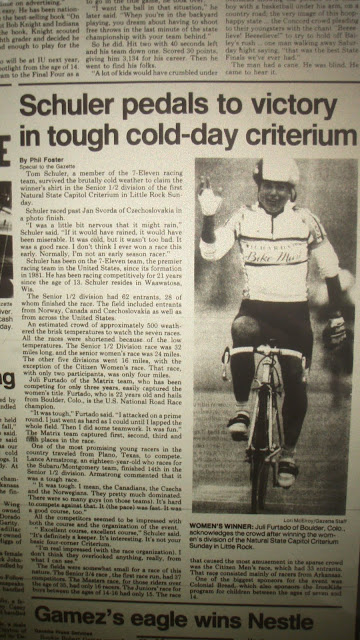 ...and the winner is Tom Schuler. At the time, he was a much bigger name in cycling than teenaged Lance Armstrong
The event was sponsored by Colonial Bread and others. With prize money of $10,000.00, this was a rich race and the pros showed up along with all the regional hot-shots. There were several classifications with payouts, along with a Citizen's Race division that was made up of 33 mostly local riders.

The winner of the women's division was Juli Furtado, a former US National team skier who had won the National Road Championship in 1989 and who went on to win the first World Mountain Bike Championship cross country title. She followed that with a string of World Cup wins. You know the Lance story, of course. He was, indeed, a promising talent!

Let me note here that searching newspaper archives at the library is much harder than Google! You actually have to search for whatever it is you're looking for! Much of this information came from the Gazette archives along with helpful direction from Steve Shepherd and John Kelly.
If any readers can make this story more complete, feel free to comment!

(*In researching this article, I found a statements in a 1991 Arkansas Gazette article twice referring to Armstrong as "last year's winner", and elsewhere in the 1990 article, he was said to have come in 14th. Confirming obscure information from before the information age is difficult!)

Great work John! I raced this event (cat 3) and it was extremely cold for that time of year. We even filmed a commercial to promote the race with yours truly in it, among a few others. Mark Gorski (Olympic Gold Medalist - Sprint) was a part of this race (as a non racer/promoter) and was also featured in the commercial that was filmed in downtown LR earlier that winter.

One other thing... the Czech National team came to LR for this event. Robert Jacuzzi hosted their team and Greg Eberdt and I were fortunate enough to take them on a training ride earlier that week out Hwy 10. It was an exciting time for Arkansas Cycling.

I came across a feature article about Gorski in the paper that week.Many folks have memories of this race series, but are unable to pin their recollections down to specific years. Thanks for the feedback!