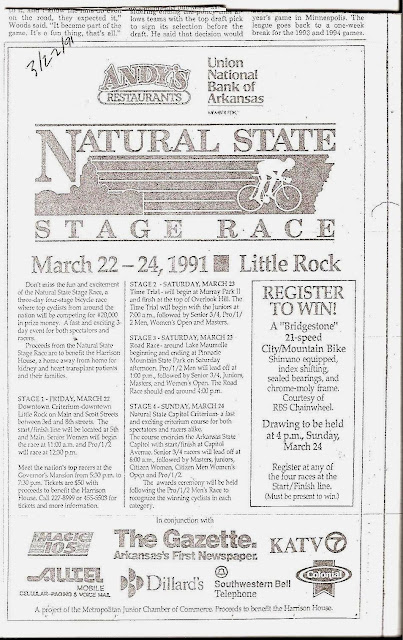 This advertisement ran in the Arkansas Gazette, March 22, 1991
The Natural States Stage Race series was arguably the biggest in terms of scale and star power. Andy's, a local restaurant chain put up $30,000.00 in prize money at a time when, like now, most bike racers were poor but the average price of a new car was around $16,000. Some of the notable names included Lance Armstrong, still an up-and -comer, Davis Phinney, Scott Moninger, Bob Mionske (the attorney and  "Road Rights" columnist of today), Bobby Julich, and Olympic gold medalist Alexi Grewal. Coors Light was the powerhouse team. The 1991 Natural State race consisted of these stages:

Friday, March 22 1991
Stage One- A downtown criterium. The course consisted of a loop of Main and Scott Streets between Second and Eighth Streets. The crits ran between 11a.m. and 1:30p.m. on Friday and the streets were closed except for a brief window at noon. The Men's Pro 1/2 category was won by Dave Mann of IME Bolla Wines, with second going to Brian McDonough of Gotham Cyclists. The two went away early and maintained a gap for over half of the  race, with Mann outkicking McDonough for the win. Mann had won the Tour of New Zealand in 1987 and had 14 career wins to his credit at this time.

Saturday, March 23
Stage Two: Time Trial from Murray Park II to the top of Overlook Hill.
This had to be a great way to start the day for the racers. Here are the top three finishers:
1) Mike Engleman, Coors Light 4:22 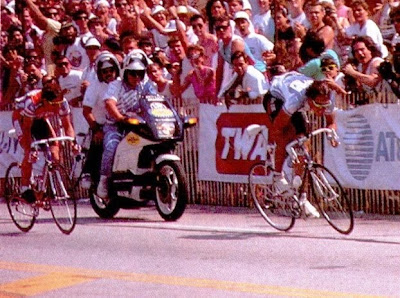 Photo from: http://www.cyclingrevealed.com/
Engleman, riding for Wheaties/Schwinn, was pipped at the line by Coors Light's Greg Oravetz in the 1989 USPro National Championship. Future teammate Greg LeMond was 10th.
The only local name that I recognized was that of my old friend Robert Orr, who finished 9th in the Masters class at 5:20. Robert is also the only person I know who has raced a double Iron Man (he came in second).  I'm sure the folks who were riding at the time would recognize more of the competitors.

Stage 3: Road Race around Lake Maumelle, beginning and ending at Pinnacle Mountain State Park. This stage saw action from all of the big boys and was won out of a nine man break by Rich McClung of the Shaklee team, with Dave Mann in second and Graemme Miller in third. Lance Armstrong had taken a flyer for a few miles, only to be reeled in and finish with the break.


Dave Mann took the GC win for a whopping $2700, followed 27 seconds back by Armstrong for second place, which paid $1450. Davis Phinney pocketed $955 for third overall. There was payout through fifth place and for stage placings, etc, so the prize money was spread around.

This was a stellar field of riders. This kind of event requires an amazing amount of work and a chunk of money to pull off, but over the years a few folks have put together some really big bike races. I wish that I had been interested!
Posted by JBar at 9:30 PM

Very Cool, I was riding back then.

Any chance you remember the Talimena / Winding Stair stage race from the 80's? Started in Heavener, OK.