I spend a lot of time along the River Trail and usually have early knowledge of any issue regarding infrastructure, but the long summer days apparently led me to miss a problem that is obvious to trail user and drivers on I-430 after dark. The lights on Two Rivers Bridge don't work.

Back in mid-September, I encountered John Burton, Pulaski County Surveyor and the project manager for the Two Rivers Bridge construction project, directing traffic at the bridge on a Friday evening. Folks from Koontz Electric, the lighting contractor for the LED lights at Two Rivers, the BDB, and the new projects downtown, were hard at work to fix problems with the lights. John praised Koontz at the time for continuing to tackle the issues. I've had some business experience with Koontz in the past and they enjoy a reputation as a very capable bunch, so I didn't give it a lot more thought and assumed the lights were soon back on line. I was wrong.

The bridge was dedicated with much fanfare in July of 2011, but by January 2012, problems with the lights had become apparent and the bridge had to be closed for a couple of days to facilitate repairs. 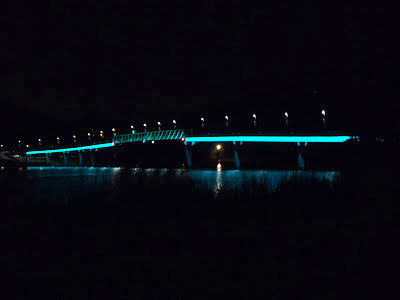 This November 2011view hasn't been duplicated lately.
Last Thursday, I mounted my headlight for the first time this fall and, after some hill drills at Fort Roots, went touring on the harvest moon night. My companion had never seen the bridges in their illuminated glory and darkness was just falling so we headed up river. The BDB lights were not yet on, so we headed up to the Two Rivers Bridge to check it out, only to find that it, too, was dark. By the time we headed back to the BDB, it was alight and I thought all was well.
I assumed there was still some minor glitch at Two Rivers and didn't realize that the lights were not working at all. A lunchtime conversation Friday led to contact with John and the word that the problem was not solved. I was then directed to a news item on KARK's site.
The project is two years old, as are the problems. It is unclear whether the issues are with the lighting product or with the installation, but the implication is that the lights and/or fixtures are not up to the duty. The news article said the county was prepared to "send the bond back" and that that would mean the contractor would have difficulty "getting work in the future".
Typically, contractors provide "payment and performance" bonds to assure project owners that suppliers and subcontractors will be paid and that the job will be completed in an acceptable manner. It is esssentially an insurance policy to provide protection from liens and shoddy or incomplete work. Contractors will go to great lengths to prevent a claim from being made against a bond, as it affects both their ability to obtain bonding and the rate that they pay for bonds. Like your auto insurance policy, claims against a bond raise rates and can lead to cancellation. If a contractor cannot bond a job, they are excluded from most major projects. For that reason, and the fact that it is just good business, I would expect Koontz to solve the problem. In the TV News segment, Pulaski County Director of Public Works Sherman Smith, said the lights should be back on by mid-November. In the meantime, the Two Rivers Bridge remains dark.
Posted by JBar at 8:44 AM