The installation of LED lights on the Clinton Park Bridge has been completed and the bridge is now re-opened to the public at all hours. I'm not sure whether the lights have been activated, yet, but I'll ride down to check it out at my first opportunity. The lights on the Big Dam Bridge and Two Rivers Park Bridge are stunning, so I'm looking forward to seeing the downtown bridges similarly illuminated.

Another BDB Bike Celeb
I guess journalists are supposed to report the news rather than be the news, but Peter Flax, editor-in-chief of Bicycling Magazine, was in town for the BDB100 as a guest of Orbea USA and Orbea account manager Steve Brawley. As Tony Karklins of Orbea put it, "they sampled the best of what Central Arkansas has to offer", including an opportunity to ride the BDB100 on an Orbea, a stay at the Capital Hotel, and participation in the events surrounding the BDB100. 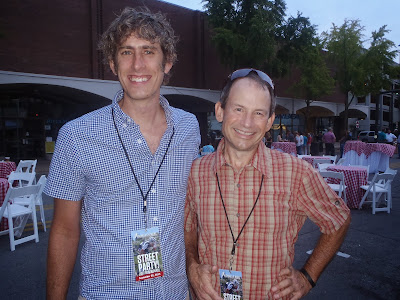 Bicycling Magazine editor Peter Flax and me at the Capital Hotel/Orbea street party last Saturday evening.
I am hoping that my quasi-jounalistic credentials are slightly enhanced by having my photo made with Flax. After all, we are both in the business of serving the cycling community with news and information, though our circulation numbers differ (Bicycling circulation wordwide= a bunch;  JBarCycling circulation= well, uh, call it "very targeted marketing"), Bicycling lists an editorial group of 12; JBarCycling does not; and, unlike JBarCycling, they sell a lot of advertising which generates profit.
Other than that, you can see that the two operations are near identical. Look closely at the photo. We are both smiling and we have identical credentials!! OK, yes, he's taller.
I saw Peter on Wye Mountain and he finished the ride with Mike Collier, a JBar Cycling reader and long-time friend, so I know he got the full experience, suffering included.

Peter had very good things to say about his stay and the ride, so I look forward to seeing if he writes about his Arkansas experience in an upcoming issue of Bicycling.

The geese are back in NLR Parks- Call in the drones!!
In Ottawa, they're tired of their gees pooing up their parks just like we are. You'd think they'd embrace the feces since the birds are, after all, Canada geese. Eh? As it turns out, Canooks are spending big loonies to call in drone strikes in an effort to rid their riverside parks of the beach fouling fowl. 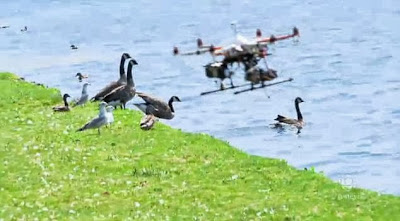 This could be Victory Lake. Photo from DailyMail.co.uk
I know that we have some local hobbyists who would be delighted to put their UAV's to work keeping our parks clear of geese and safe for America. In fact, the National Guard Air Wing in Fort Smith is converting from A-10 Warthogs to drones, so perhaps they could use Burns Park as a training site, though they might have to dial the Hellfire missiles back a bit.
The Ottawa plan uses a helo type drone equipped with lights and noise generators to harass the geese out of their comfort zones. I think it is a damn fine idea.
Out-of-Town Townie riding 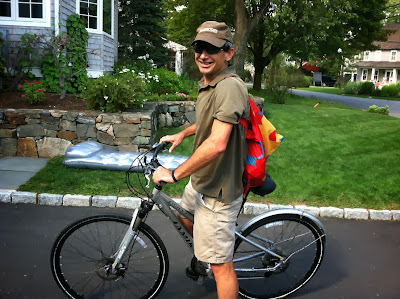 B-double-E-doubleR-u-n. Platform pedals, no helmet, and a floral beach bag. I was somewhat out of my element but ready to roll!
We recently visited family in Connecticut and, while I had resigned myself to taking a few days off of the bike, I aired up the tires on my sister Kathy's cruiser to explore the neighborhood and make the short run to the beer store. The area is made up of many small communities and beach associations, so most local shopping and dining destinations are within easy walking or riding distance. 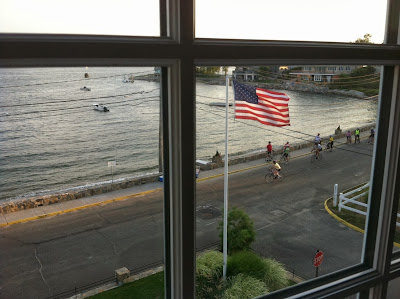 Friday night beachfront road riders
Friday evenings bring a big road ride past my brother-in-law's home. He said there are easily 70-80 riders most weeks. The riders visible above are the tail end of the group. I visited with some of them and, though they have an active cycling community, it sounded as though their access to good road riding pales in comparison to what we enjoy here. The high population density of the area precludes easy access to little-traveled rural roads.
As I cruised around some of the very exclusive enclaves in the area, the spectacular old estates, tennis courts, and private community security forces certainly gave it an atmosphere that told me that I was not in Arkansas. That said, I was made to feel quite at home after I was chased by a couple of large dogs and then passed a sign on the yard of an oceanfront property that said "Trespassers Will Be Shot. Survivors Will Be Shot Again". For a moment, I thought I'd just passed the Saline County line.
More Local Than Connecticut, But A New Ride For Me
We have a small home on the Little Red River near Heber Springs, and we will embark on a road ride in the area from time to time. Unfortunately, all of our routes involve riding some sketchy stretches of highway to connect some otherwise high quality miles of road.
One of our local friends, fishing guide Matt Milner, has been bitten by the bike bug, and has been logging a bunch of miles around the area. I recently spent a weeknight at the cabin in order to get an early jump on a business trip the next day, so I imposed on Matt to show me one of his routes. 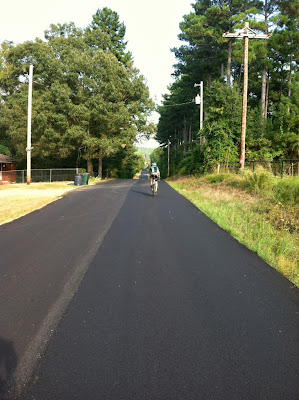 It's hard to beat a low traffic count, rural scenery, and new asphalt, especially on a "town ride".
Matt's after-work ride took us through several Heber Springs neighborhoods along Greers Ferry Lake, circled down to a marina, followed a short stretch of not-too-busy highway, and took in several miles of isolated freshly paved secondary road. I was pleasantly surprised  that, while our 27 miles included a little backtracking, the continuity of the ride was very good. There were very few stops required and the drivers that we encountered all gave us plenty of room in passing. Thanks, Matt, for sharing!
Back On The Home Front 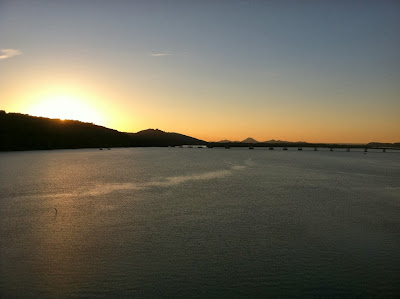 Fall brings a different quality of light to the scenes that we enjoy on every ride along the Arkansas River.
A common sentiment that is often shared by Central Arkansas riders is that we are blessed not only by some great bike infrastructure, but by the stunning beauty of our surroundings. It can be easy to take it for granted when a new scene presents itself at almost every turn. 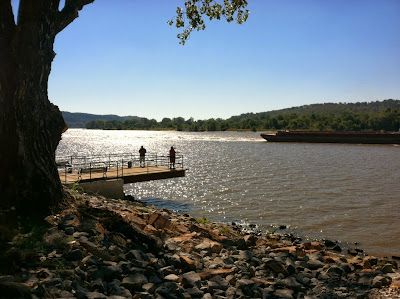 The fishing pier at Burns Park is enjoyed by both fishermen and folks just seeking a quiet place beside the water.
Though the last couple of days have been gloomy, the next few weeks should include some of the best riding that Arkansas has to offer. The weather is mild, the days are still reasonably long, and changing leaves are promising some spectacular scenery.
Go ride your bike.

It's interesting how this project continues to be discussed and pursued. It's even more interesting to see the language that continues to be used - "abandoned railroad right-of-way", as if there is this overgrown strip of land across parts of three counties that's just "available for the taking"! When the railroad in question went out of business in the mid 1980s, land that they owned was sold and property that they had secured "right-of-way" on, reverted back to adjacent land owners. Currently, much of this land is in private ownership and various improvements are in place. Most of the landowners that I'm aware of do not embrace the thought of loosing their land. I'm sure there are hikers, joggers, bicyclists, and those who see a way to leverage a profit somehow who are very supportive of the project. They have nothing to loose and everything to gain and, they seem to be the only ones interviewed and quoted! Statistics I've found indicate that the fraction of Arkansas' population that are bicyclists is less than .5%. I think it's shameful to contemplate taking people's land and spending the kind of money being discussed to satisfy the hobbies of a very few, especially when there are so many other transportation projects that need improving and building that are primary transportation thoroughfares for the masses! I'm John Terry, Saline County land owner.