Meetings, meetings: People Are Working For You!

Goals: Close The Loop, Complete Streets
At BACA's recent general membership meeting, president Judy Lansky re-emphasized the organization's efforts to "close the loop" of the Arkansas River Trail in Little Rock. In addition to closing the loop, BACA has set as a priority the adoption of a "Complete Streets" policy by the City of Little Rock. The Little Rock Board of Directors has passed a resolution to implement such a policy, but it is not let on the books and will likely see resistance from developers to any substantive actions. Board member Mason Ellis delivered an extensive presentation of the features and benefits to the community of Complete Streets.

Mayor Mark Stodola made an appearance and spoke optimistically about the prospects of completion of the River Bluffs trail section to extend along the river behind the Dillard's corporate HQ on Cantrell Road. Projects have been approved that will extend the trail from both the east and west termini of the section, and Stodola stated that funding has been identified that could finance the project. One recent hitch came from the owner of the Riverside Marine property west of Dillard's. The property owner had previously agreed to donate a right-of-way, but has apparently reneged on the offer and has now set a price for the land needed for the trail extension. 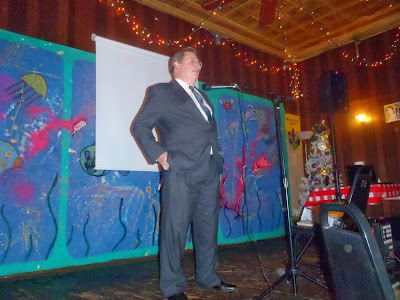 Mayor Stodola addressed the recent general session of BACA.
Stodola indicated that he had had direct conversations with decision makers at Dillard's
and that a positive outcome for the River Bluffs project was likely. Concerns over construction activity and security were mentioned as some items to be overcome, but I consider simply engaging in discussions with Dillard's to be progress.
In addition to an agreement with Dillard's, the project will also require the support of the LR Board of Directors, and this is where Lansky is asking for support in contacting board members asking them to support the Mayor's efforts. Elected officials do respond to their constituents, and it is important to provide input long before such matters come to a vote. If there is one thing that I have learned in dealing with municipal governments over the last few years, it is that most decisions are made long before the vote is held. I have never seen the impassioned pleas of citizens during the public comments time sway a vote at a city council or board of directors meeting.  The work must be done long before the vote.
To this end, Little Rock supporters of the River Trail need to contact their directors and the at-large members of the board. Be positive about the impact of trail development and the opportunities that completion the River Trail represent for the City.
Edit:
http://www.littlerock.org/BoardOfDirectors/MemberBios/default.aspx
The link above will take you to a list of the LR Board of Directors by ward, a ward map, and contact information. Mayor Stodola emphasized that it would be helpful for them to hear from high profile individuals and from folks with connections outside of the cycling  community. Many cyclists are also business owners, bankers, doctors, lawyers, and Indian chiefs, so use those credentials when communicating! They need to know that cycling is mainstream.
Broadway Bridge Construction Reroutes
Rerouting the ART on both sides of the river during construction of the Broadway Bridge has been a topic of conversation among all of the bike advocacy groups in recent months. 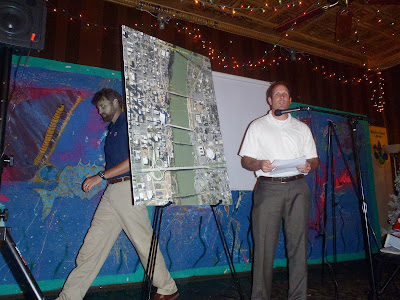 Lawren Wilcox and Seth Yancy of the engineering firm Garver laid out likely alternatives for cyclists.
The construction of the new bridge will take about two years and trail traffic will be disrupted for most of that time. Construction contract stipulations will require the builder minimize impact on the trail, but that impact will still result in extended closures, beginning as equipment and materials are staged along the river before construction begins.
In North Little Rock, riders will be directed on to Riverfront Drive, which would be only a minor inconvenience were it not for the fact that most of the 18-20,000 cars that cross the Broadway Bridge daily will be clogging Riverfront as they attempt to reach the Main Street or I-30 bridges.
In Little Rock, 3rd Street is the designated alternative route, but, it too will likely see daily gridlock.
Folks, we are facing two years of traffic mayhem in which any minor fender bender or breakdown on the I-30 or Main Street bridges will cause massive back-ups. Though cyclists will face challenges, bike commuters will have an advantage due to their small footprint and their ability to jump to a sidewalk as required. Sidewalks are nominally off-limits to bikes, but any pavement will do in a pinch. If you don't believe me, look at the designated bike routes along Cantrell Road.
Little Rock Bike Friendly Community Committee
Jeremy Lewno, Little Rock Bike-Ped coordinator, chairs this committee. Jeremy reported that Little Rock's completed application for Bike Friendly Community status has been submitted to the League of American Bicyclists.
In other business, Jon Honeywell of Little Rock Public Works reported that the project to add sharrows to Kavanaugh Blvd has been completed, and that several street resurfacing projects are in the planning stages. 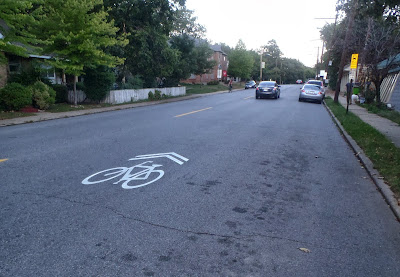 I spotted the new sharrows on Kavanaugh as I rode to the BACA meeting.
Among the streets slated for resurfacing are Louisiana St. and Overlook Drive. Plans are not firm for either project, and Overlook is is likely to draw the most interest of cyclists, as it serves as River Trail access for a great many riders. It is too narrow for two bike lanes, but it may accommodate a bike lane on the north side for the climb and sharrows on the south, where the descent allows bikes to travel at the speed of automobile traffic.
There was also a good deal of discussion about improving the safety of the several driveways that cross the multiuse trail along Rebsamen Park Road.
“The world is run by those who show up. Don’t under estimate the power of phone calls and short notes.”
Trek’s John Burke at the Wisconsin Bike Summit
﻿
Posted by JBar at 2:15 PM

As you said, the mindset of the law enforcement community is a problem. Thanks for the update Jbar.

"last I heard there had not been a single ticket issued under the law, even in cases where cyclists had been hit by automobiles. In fact, a cyclist was issued a citation in Little Rock in March for failing to ride far enough to the right when he was struck by a passing car's mirror. The ticket was later dismissed, but it demonstrates the mindset of much of the law enforcement community when it comes to bikes on the road." Friday, June 1, 2012