Well, that explains it!!

Last Saturday's 77 degree high certainly stimulated molecular activity among area riders, but it was immediately followed by plunging temperatures and frozen precipitation. Our local cycling community has not reached absolute zero, but we appear to be damn close. There is very little cycling going on and much of the activity on local boards, Facebook, and mail lists seems to concern the degree to which trainers suck (high), the current temperature (low), and the possibilities of a ride (moderately to very low). The other thing that has slowed way down is my writing motivation, a condition for which I can only apologize. While I know that having a bunch of readers desperate for entertainment represents an opportunity, inertia has taken its toll. My writing has come to rest and it seems to want to maintain that state, though I have been attempting to nudge it back into motion. I have several projects on the back burner, but each requires research and factual writing; this at a time when my real job is also demanding extraordinary attention. The lack of riding time should theoretically allow more time for projects; however, the reality is that work has left me worn out and the lack of physical activity has left me in a sedentary state. Bummer, but I'll get over it.

Dog-gone tired of this crap...

There have been several items of interest in the local news, one of which is the proclamation by Judge Buddy Villines that dogs will be banned from all local bike and pedestrian bridges, including the BDB, Junction Bridge, and Two Rivers Bridge if dog owners don't start picking up after their pets. This has been reported in local media ranging from Fox 16 news to Otis the Head Cat, so most of you have already heard the word. Being a dog guy, I regret that responsible pet owners will be inconvenienced due to the actions of miscreants, but that's the way things work. I suggest that offenders be called out if spotted walking away from a fresh deposit, though I recommend only a gentle advisory chiding. Some rude folks can also be defensive and confrontational, though most are just embarrassed by getting caught in the act.

How about the NLR police officer whose cruiser was stolen by a suspect Friday night? It is reported here on Forbidden Hillcrest , and the recording of the radio traffic is worth a listen. Favorite moments include the suspect asking pursuing officers over the police radio "are ya'll real cops ..." , and, when the officer whose car was stolen asks his supervisor if he should take pictures at the original crime scene, the supervisor responds, "I think you may want to come get your car....".
Thanks to the link from the Arkansas Times blog, I thought that I'd gained an insight into all of Hillcrest's dirty little secrets, but the tantalizingly named blog seems to have shut down a few weeks ago; that is, until the stolen cop car story brought it to life. Leave it to NLR to liven up things for the swells residing in  Hillcrest. 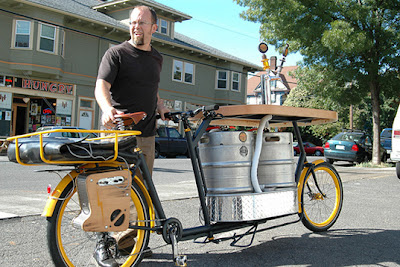 Welcome to Portland*! This Hopworks custom mobile pub has all sorts of possibilities to enhance the local scene. Combine this unit with Bill's Coneys and we may never need to leave the confines of the River Trail. Regulatory issues aside, I think a unit like this would be a fine addition to traffic along the trail.

Hang in there folks!﻿ Though there is no light at the end of this 7-Day Forecast, we all know that spring will be upon us in a few weeks. In the meantime, ride the trainer if you must, but please don't brag about your 2-hour sessions. It makes me anxious about my own fitness and gives me cause for concern about your mental well-being.
*I initially gave credit for this touch of genious to Seattle. The sun should have been a give away.
Posted by JBar at 10:33 AM

Thanks for the link and nice words. I appreciate it.