Last spring, I engaged in a conversation with a long-time top tier racer regarding the evolution of competitive cycling in Central Arkansas. I had just heard thet there was to be no Arkansas road race state championship and it seemed like there was little to offer the competitive cyclist in Central Arkansas. Before I stated riding, I had been aware of CARVE as a racing entity, and even when I hit the road a few years ago, CARVE had both an "elite" squad of racers and a large contingent of club riders. The was some disappointment expressed that the club seemed to have lost its way and, though there were still a few club events and Saturday rides, there was really nothing in the way of a team and it seemed that CARVE's identity was fading. Fast forward to now. I recent months, CARVE has been reconstructed and is ready to re-enter cycling society. Here is the release that I received concerning the revamped CARVE and some pretty ambitious plans for races and other events:


It’s odd to say something like that about a cycling club that’s been around for, like, 10 years. But after a couple of years of little activity, Central Arkansas Velo is back on two wheels and ready to roll.


If you ride bikes (and really, you probably wouldn’t be looking at this blog if you weren’t a rider, right?) then CARVE likely has something to offer you. From organized group rides and skill-building clinics, to racing opportunities, the revamped club is hoping to appeal to riders of all levels. From the beginner to the fastest of sprinters, CARVE has you covered.


The club’s officers and core members have been busy this winter setting new goals for the group and planning some very special events for the spring and summer.


First up is the Lake Sylvia Slobberknocker Mountain Bike Challenge on April 30. The Slobberknocker is a 66-mile gruntfest that is part of the Arkansas Mountain Bike Marathon Series and will be held in the gorgeous Ouachita Mountains west of Little Rock near Lake Sylvia. For those with a little more common sense, a 33-mile Short Course race will also be offered. CARVE members have been working hard on organizing this first-year event and it has the potential to become an annual mountain biking spectacle of pain and good times. The course consists of 95 percent fire-road and will appeal to veteran mountain bikers as well as cyclists who spend most of their time on the road.


For the roadies, CARVE is sponsoring the Ronde van Burns, the weekly Wednesday night crit series at Burns Park. Each Wednesday evening in June, racers line up for the highly competitive series. And this year, to cap off five weeks of elbow-banging, lung-searing, quad-busting throw downs, there will be a morning of criterium races on a section of Riverfront Drive in downtown North Little Rock on July 4. God bless America and bikes.


CARVE has scheduled group rides on almost every day of the week. Whether hitting the trails or the tarmac, going long or just getting in a leisurely hour on the River Trail, the club has plans for rides for beginners to veteran cyclists and everyone in between.


Interested? Well, coming in late March or early April will be a membership party at the Hospitality House in Burns Park. That’s the place to meet with current members and hear about what the club has to offer. Our web site, www.team-carve.com, should be up and live just after March 1 and will have lots of information about the scheduled rides, races, and events we’ll be supporting. CARVE is also on Facebook. Search for Central Arkansas Velo, or CARVE, and hit the “like” button.


For those looking to get a jump start on joining, membership forms can be found at Chainwheel in Little Rock. Membership is $100 for two years and includes the new CARVE jersey.


Members get access to club-only clinics, group rides and discounts at Chainwheel. Members who race may also qualify for reimbursement of entry fees.


Of course, none of this is possible without great support, and CARVE is happy to have the backing of our awesome sponsors: Dr. Feelgood, Caldwell Toyota, Neurosurgery Arkansas, Donnie's Foreign Car Service, Metropolitan Realty Development, IFRAH Financial Services, Wild Birds Unlimited, Aristotle, Chainwheel, Cannondale and Trek.


It looks like 2011 is gonna be a fun-filled year for cyclists in Arkansas. It’s definitely gonna be fun for CARVE. Come ride with us.

...and that's the official word!
I know that all of you fashion-forward types are already asking the very important question of:
"So, how cool is the kit?"  Here's the preview of your 2011 summer fashion statement: 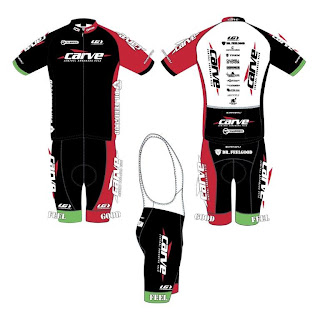 Good stuff. One very important thing that came up repeatedly in the conversations I've had about CARVE is that while Chainwheel is a key sponsor, you don't have to be a Chainwheel guy or gal to get involved. Most riders have some sense of loyalty to their favorite local bike shop and that is natural, but don't feel like you've forsaken your boys if you decide to join CARVE. Of course, if you CARVE kit up and race against your crew, that's a different matter. A better idea would be to organize your bunch and bring your team to the CARVE events and see who is still talking smack at the end of the game. I'm not a racer, but we need more opportunities for competition here and it looks like CARVE is going to help fill the void. I'd love to see CARVE, an ACF team, the guys from the Ride, and maybe even some Fast Girls or bike nerds field teams. Some team racing would add a whole new dimension to the summer crit series, state championship events, mountain bike events and any other races that come along. It's all a part of the continuing evolution of our cycling community. Check back here or at the CARVE site for the date of the upcoming membership party.

Email ThisBlogThis!Share to TwitterShare to FacebookShare to Pinterest
Labels: CARVE